Yes, I Still Remember How to Tat!

OK, I've finished tatting the first Emily doily, and it's on the blocking board now. 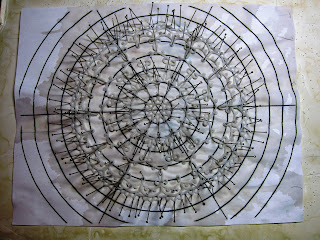 Once again, I have to thank LadyShuttleMaker for her blocking templates. The doily definitely would not have come out as well without this. Some of you are having heart palpitations at the thought of sticking in all these pins, but I say if I've spent this much time tatting it, why would I not take the time to make sure everything is properly aligned? (Hint: Since this round template is divided into 6ths, it also works for snowflakes. Use the square template to block anything with four or eight repeats.)

Since I got back from San Francisco, Squijum has taken to lying on my feet. It may simply be that he likes the fleece lap blanket I'm using, but I suspect he's also trying to prevent me from leaving again. 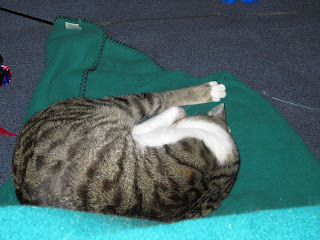 The City by the Bay

My parents and I went to San Francisco, where my sister recently moved, for Thanksgiving. I didn't get any tatting done, except for a little bit during the 2-hour flight delay in Phoenix, but we had a great time. 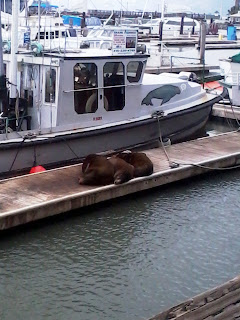 Sea lions on Pier 39. There was a much larger group, but I forgot my camera that day, and they were too far away to get a good photo with the phone.

There was also a sea lion off by itself which was clearly sick. I called the posted number for the Marine Mammal Rescue Service, but I couldn't believe the number of people who were standing there saying, "Oh, look at the poor sick sea lion" and NOT CALLING THE NUMBER!!! I mention this because it is an excellent example of the well-documented phenomenon of human psychology where we all tend to assume that if there is a problem that many people are aware of, I don't need to do anything because someone else will take care of it. This is a perfectly easy tendency to overcome, but only if you are aware of it.

When we went by on an evening cruise around the bay the following evening, the sick sea lion was gone, so I hope that means there was a successful rescue. They can't always rescue an animal if it still have enough energy to fight back, but I don't think this one did. (They can't use tranquilizer darts because when the animal feels the dart, its instinct is to enter the water, where, being tranquilized, it will drown.)

For the rest of the trip I remembered the camera, so here's the Bay Bridge during said evening cruise... 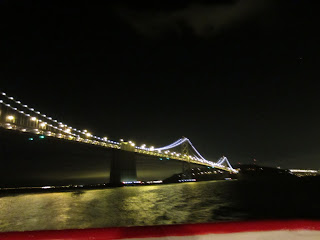 ...and the Golden Gate Bridge at sunset. 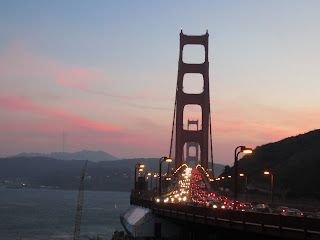 There Will Be Tatting Soon...

I promise! I have finished the book and am once again working on the "Emily" doilies. I'm not that much farther on than I was the last time, though, so no new pictures. I know you need eye candy, so here's Squijum helping me sort socks. 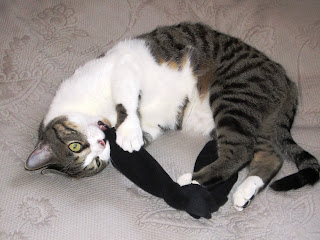 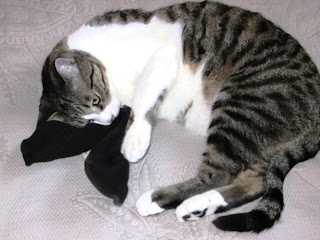 Amazingly, the sock is still intact.
Posted by Miranda at 9:30 PM 3 comments:

The Dragons Won't Let Me Tat

I have not tatted a stitch all week. Here's why: 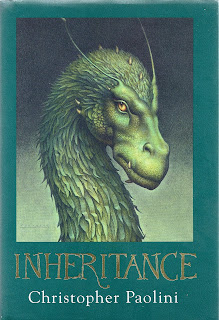 I've been waiting for three years for this book-- the last in the series-- to come out. I'm about halfway through it. The blog will resume when I finish.
My favorite line so far is this. When the werecats are negotiating joining the rebel army, they have only a few requests, the main one being food: "Each of us will be promised a single duck, grouse, chicken, or similar bird per day, and every second day, a bowl of freshly chopped liver. Even if we do not choose to eat it, the food will be set aside for us." Doesn't that second sentence just sum up the feline spirit? 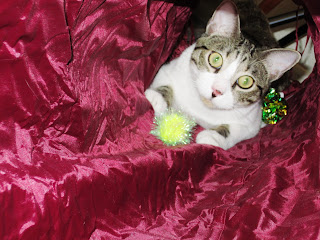 Squijum says that is as it should be.
Posted by Miranda at 1:36 PM 5 comments:

Browsing an antique store yesterday, I found a couple of nice hankies. 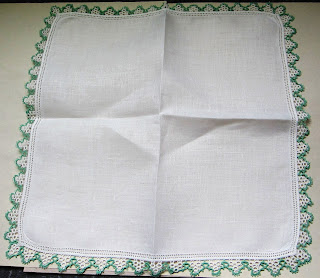 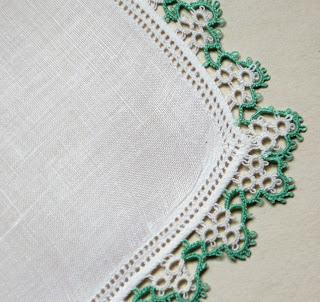 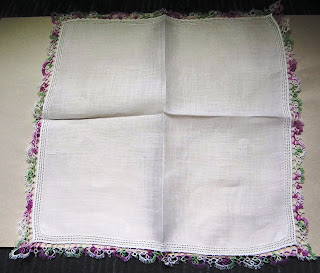 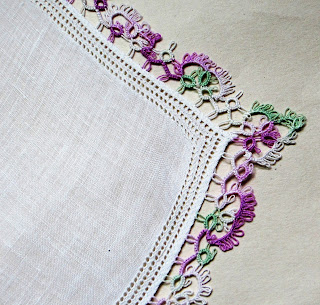 I also saw but did not buy this purse. 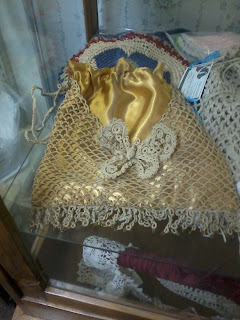 It's not the greatest photo, taken with my phone through a glass case, but the whole thing is tatted.

There were a few other hankies and pillowcases with tatted edgings, but not very interesting patterns so I didn't buy any others. However, as I was digging through the piles of textiles, I did make sure to leave anything with tatting on it on top.
Posted by Miranda at 10:05 AM 4 comments:

First I need to ask if anyone has heard from Tatskool lately. I talked to her a bit over the summer when I ordered some of her threads, and she sounded like she was going through a rough time. Then I e-mailed her last week just to ask how she was doing and haven't heard back from her. Tatskool, if you're reading this, could you let us all know if you're OK?

Here's my progress on "Emily". 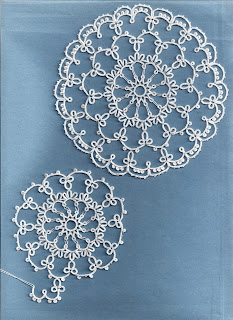 The one on top shows round 6. On the bottom one I have just started round 5. I decided to tat rounds 5 and 6 together because you can climb into round 6 without cutting the threads. Of course, this does mean you have to put a massive amount of thread on shuttle 2, whereas if you cut between rounds you wouldn't need a second shuttle for round 6 at all. On the upside, I learned with the first one just how much thread it takes, so hopefully I won't need to add any more on the second one.

If you look closely at the top one, you'll see little gaps at the base of the 3-ring clusters in round 4. Those definitely weren't there when I tatted it. They appeared when I blocked it, and I really didn't feel like I was stretching it that much. At least it happened evenly all the way around, so a non-tatter might think it was supposed to be that way. Now I'll have to try to make it happen the same when I block the other one.

There are seven rounds in all, so I am fairly close to being done.
Posted by Miranda at 10:01 AM 6 comments:

Searching Barnes & Noble's website for "tatting" will mostly yield a bunch of books on tattoos. However, I did manage to find this little gem. 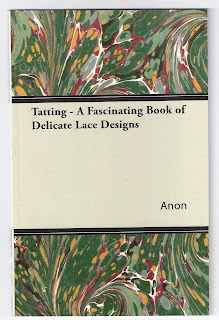 It's a reprint of a vintage tatting booklet; the original cover looked like this. 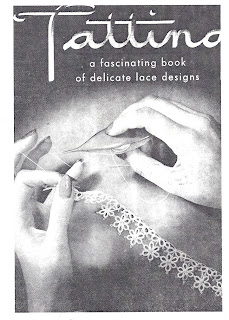 I do wish some of those vintage designers hadn't been so modest about publishing their names. Unfortunately no publication date is given, either. If anyone has the original and/ or knows when it was published, I'd love to know. I suppose we'll never know the author.

The booklet includes a variety of edgings and corners, tableware, medallions, and cord pulls. The cord pulls have the tatting attached to a bone ring (and back then it was real bone), only instead of making double stitches over the ring as we do today, the directions call for covering the ring in single crochet.

Here are a few interesting pictures. 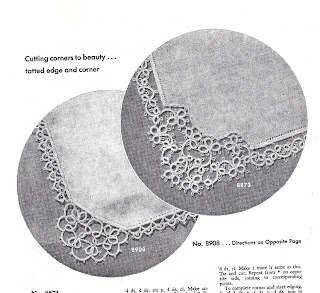 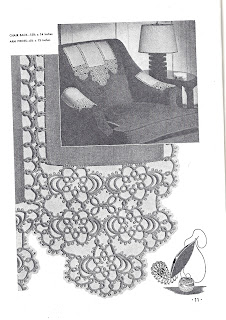 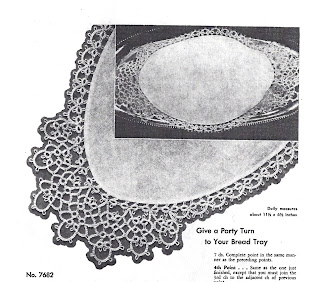 I think this is a book I will have lots of fun looking at, even if I never tat anything from it.
Posted by Miranda at 9:48 AM 5 comments:

Here's the progress on the "Emily" doilies. I've completed round 4, and started round 5 on the bottom one. After I finish round 5 on both, I won't be able to fit them both on the scanner anymore. 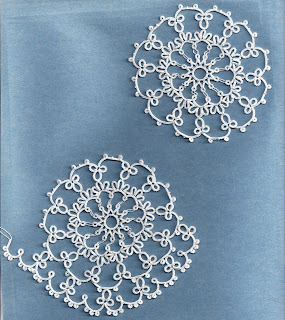 A bit of blocking after round 4 might have been in order, but it's not too bad. It will be easy to straighten out, anyway.

I like all the little Josephine knots on these two rounds. They have much more character than picots would.
Posted by Miranda at 7:38 PM 7 comments:

Here is an improved photo of the mobile, taken in morning light. 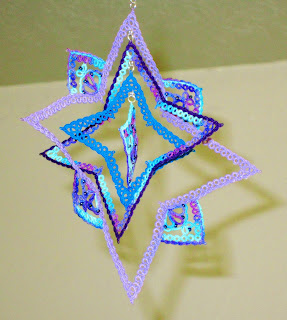 The colors are much more accurate here. It makes a very interesting shadow on the wall, too, don't you think?

And here is what I started on during all the hours I spent waiting for the stiffener to dry on the mobile. 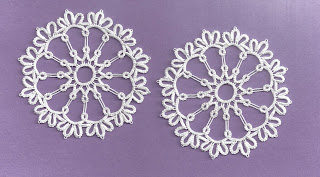 This is the beginning of a pair of doilies for next year's relief sale. My mom says doilies don't usually do too well at the sale, so I won't make very many of them. But I figure there are always a few people who still like traditional doilies. Or maybe I could take a page from Isdihara's book and call them candle mats. The finished size should be about eight inches, so they will sit nicely under a pair of candlesticks or vases.

The pattern is "Emily" from the book Elegant Tatting Patterns by Janet Carroll. I've always been drawn to this pattern, although I've never tatted it before. As the book title says, it looks elegant. I also think it's a very timeless design. You know how some patterns look dated a couple of decades later? I don't think this ever will.

I still have four rounds left to tat on these. I decided to work on both doilies at the same time because I knew that if I finished one I wouldn't want to do the second. I'm finding that they do need to be blocked every couple of rounds, so doing it this way I can work on one while the other is blocking.

I decided, after considerable debate, to make these in all white, which is something I hardly ever do. I still keep thinking, oh, I could just do one round in blue... but no, I will stick with the white to let the design shine through. I'm using Flora size 20 (and it feels like rope after using size 80 for so long on the mobile).

During the several weeks that I didn't post, I also got behind in reading other people's blogs. I'm getting caught up now. It's nice to see what other people are working on.
Posted by Miranda at 10:59 AM 7 comments:

None of these photos is really outstanding. I'll try again tomorrow with what passes for daylight in my apartment. 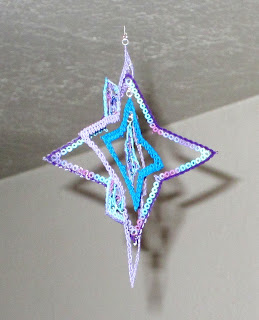 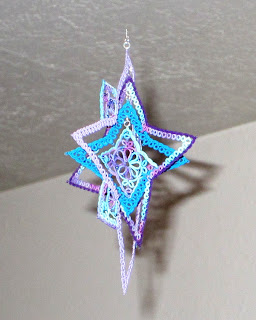 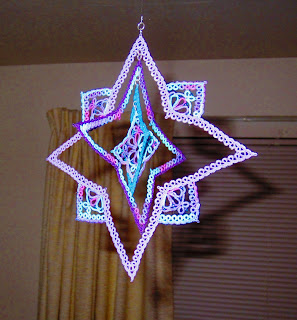 It took me longer than I expected to be able to put it together because so many coats of stiffener were required to make it hold its shape. And then a couple of the pieces bent slightly as I pulled them off the waxed paper I had set them on for stiffening and wouldn't bend back, so now they are stuck looking slightly off-kilter. I'm OK with that, though. Overall, I'm very happy with the way it looks.

Each star is attached to the one outside it by two jump rings, so they are able to swing freely and all end up at different angles. The mobile hangs from the ceiling by a length of invisible nylon thread.

The pattern is from Ineke Kuiperij's book Kerstallerhande 2. Between the diagram, the photos, and the glossary at the front of the book, I had no trouble figuring out the Dutch instructions. It helped that I also know a few words of German, and Dutch is so closely related to both German and English that I was able, as my dad put it, to just head-butt my way through.

This is the first piece of tatting I've done just for me in several months.
Posted by Miranda at 7:55 PM 5 comments: