Cats are so funny sometimes. I know many of them instinctively try to bury their food to protect it from theft, but Squijum is the only cat I've ever had who does this (I don't know who he thinks is going to steal it). He will paw at the floor, and when the linoleum doesn't rise up to cover his food, he will drag anything else he can over it. 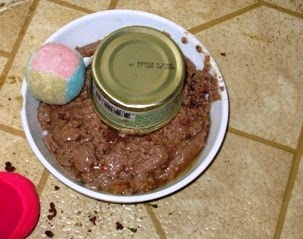 I just wish he wouldn't put the fuzzy toys in there. And of course, he then can't uncover it very well, so I have to take all the stuff off the food so he can eat it, which probably only contributes to his paranoia that I might steal it.

Or maybe it's his attempt at modern art. 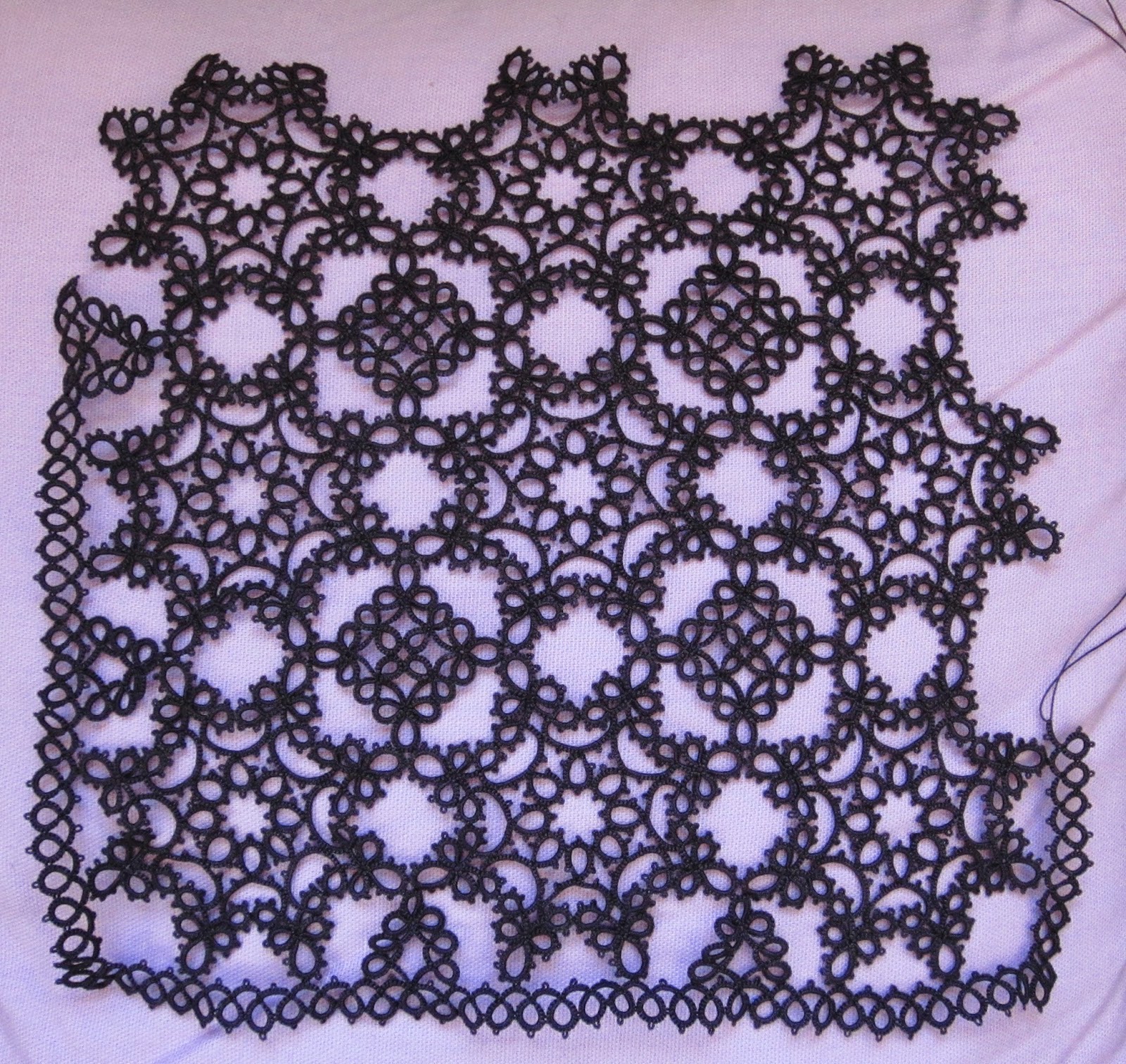 Hey Frivole, just look at all those squares! How's yours coming along?
Posted by Miranda at 7:40 PM 6 comments:

Well, I seem to have the edging right now. 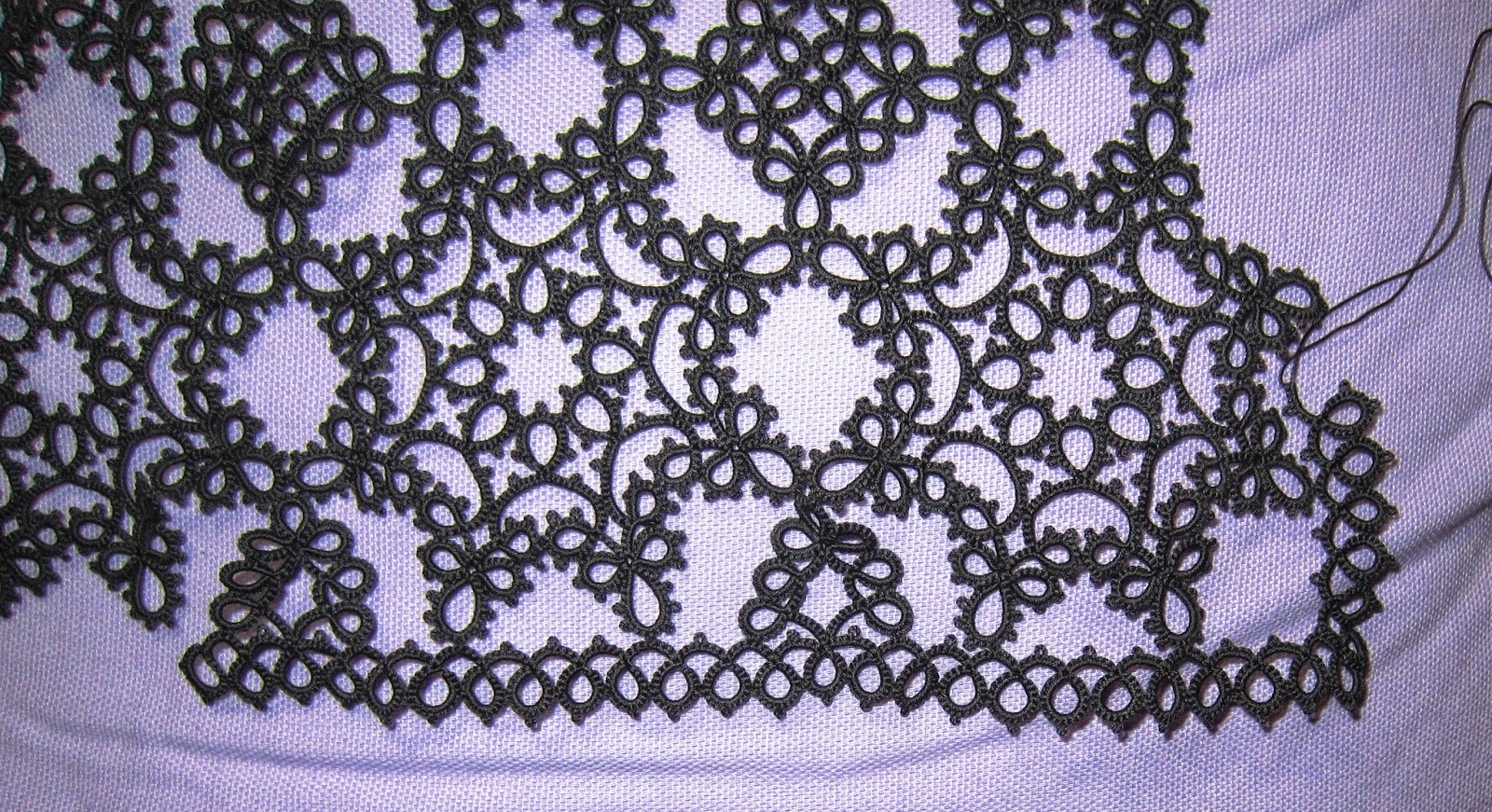 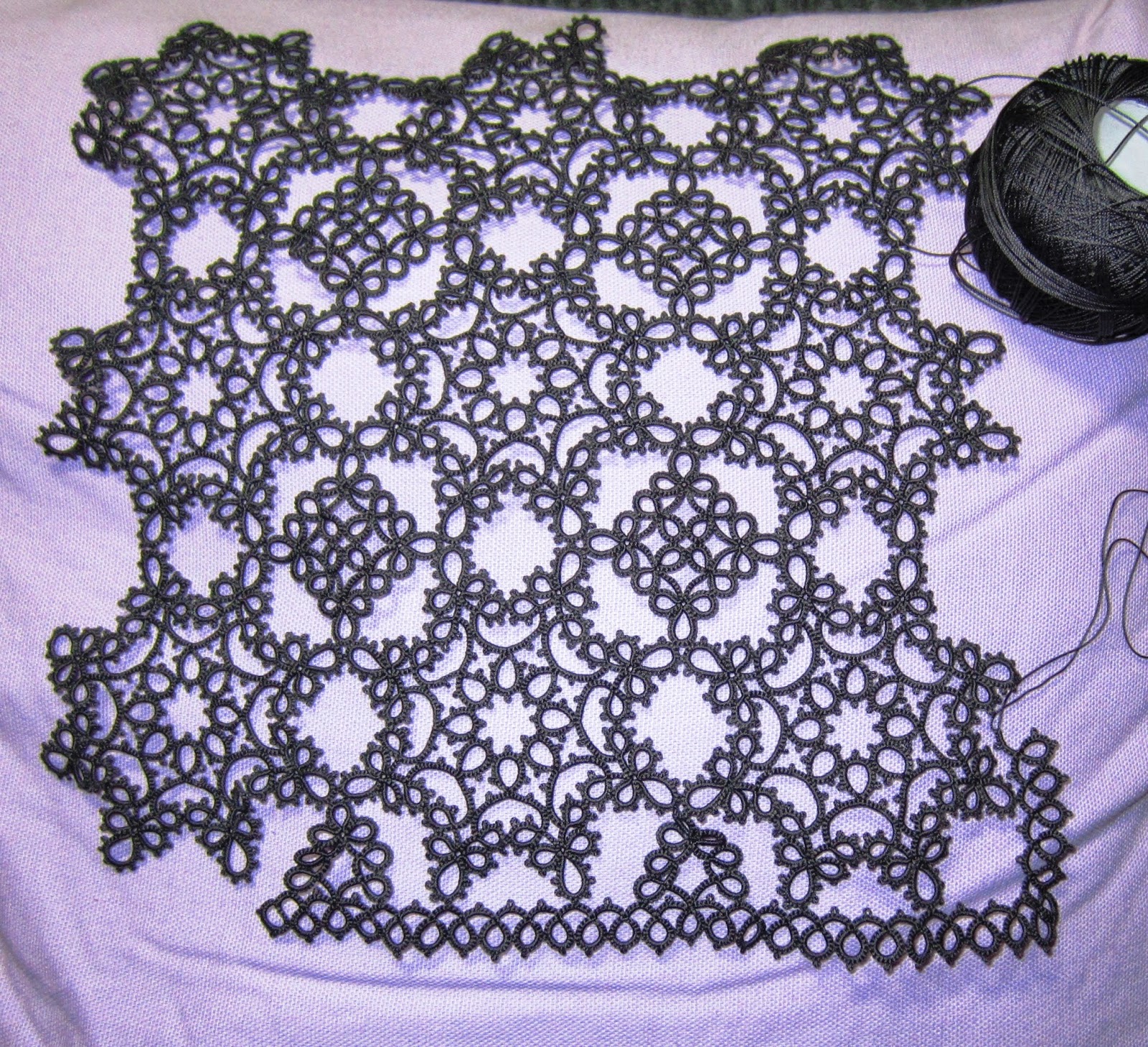 I've done a little bit more than this now, but this seemed like a good place to stop for a photo, because the shuttle needed refilling anyway. I'm happy to say that this round of edging is going a lot faster than I anticipated.
Posted by Miranda at 8:51 AM 2 comments:

As I was just finishing up the second repeat of the edging, I realized I had joined wrong on both repeats, and if I kept doing it, it wouldn't sit right. 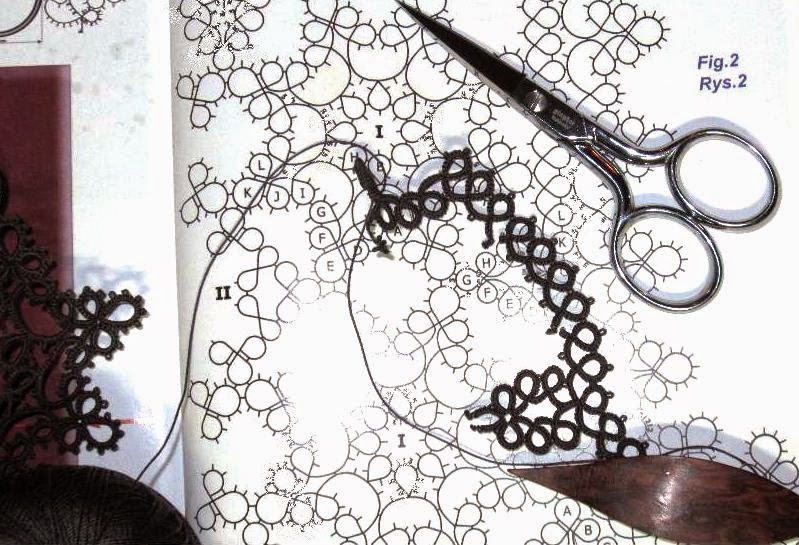 Here's one repeat of the corrected version. 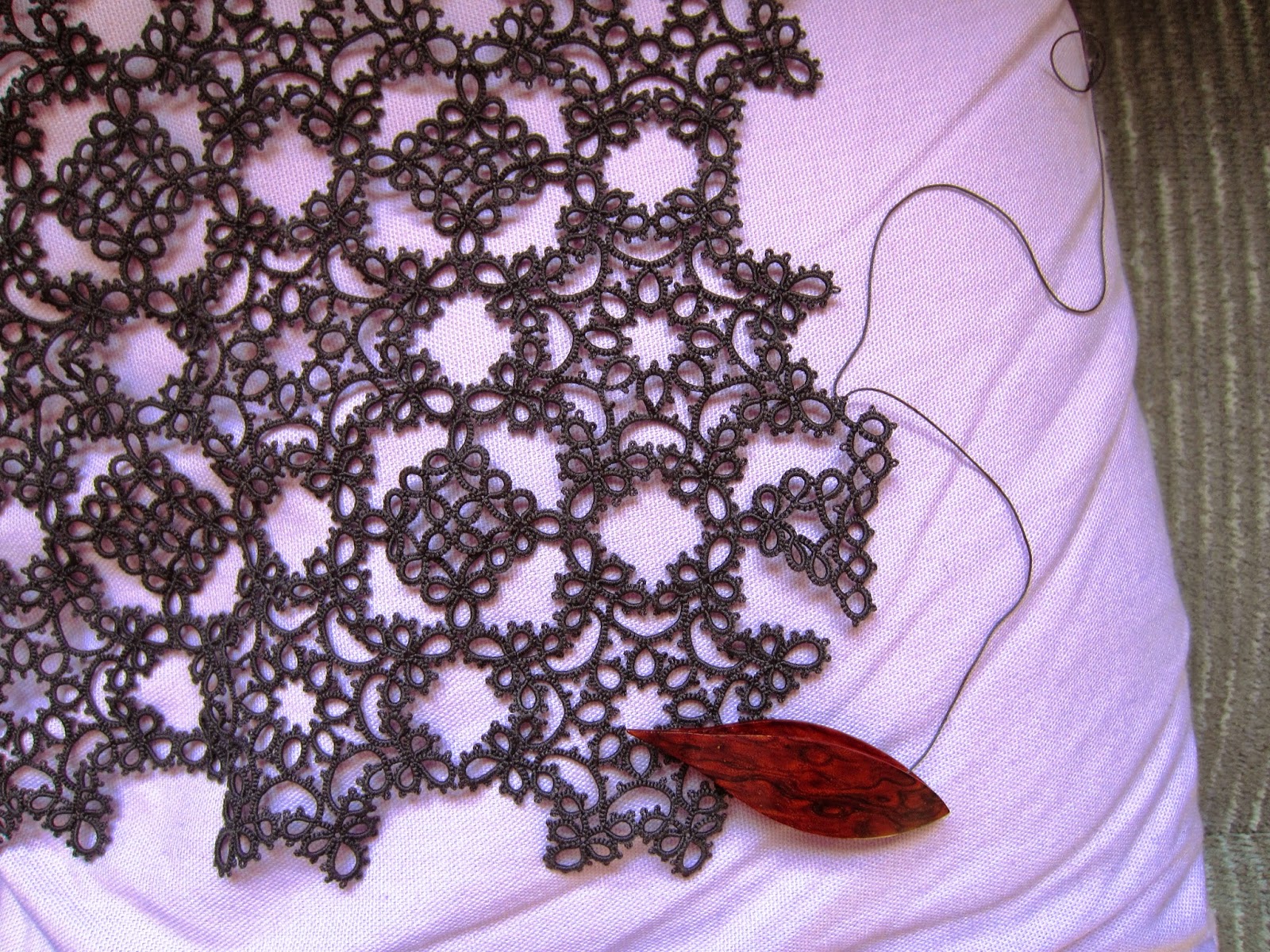 On the inward-facing point, I was joining the rings to the wrong chain on the outer part of the edging, but I've got it right now.
Posted by Miranda at 9:10 AM 4 comments:

A Dash of Color

Before starting on the doily edging, I wanted to briefly work on something else, something with some color. 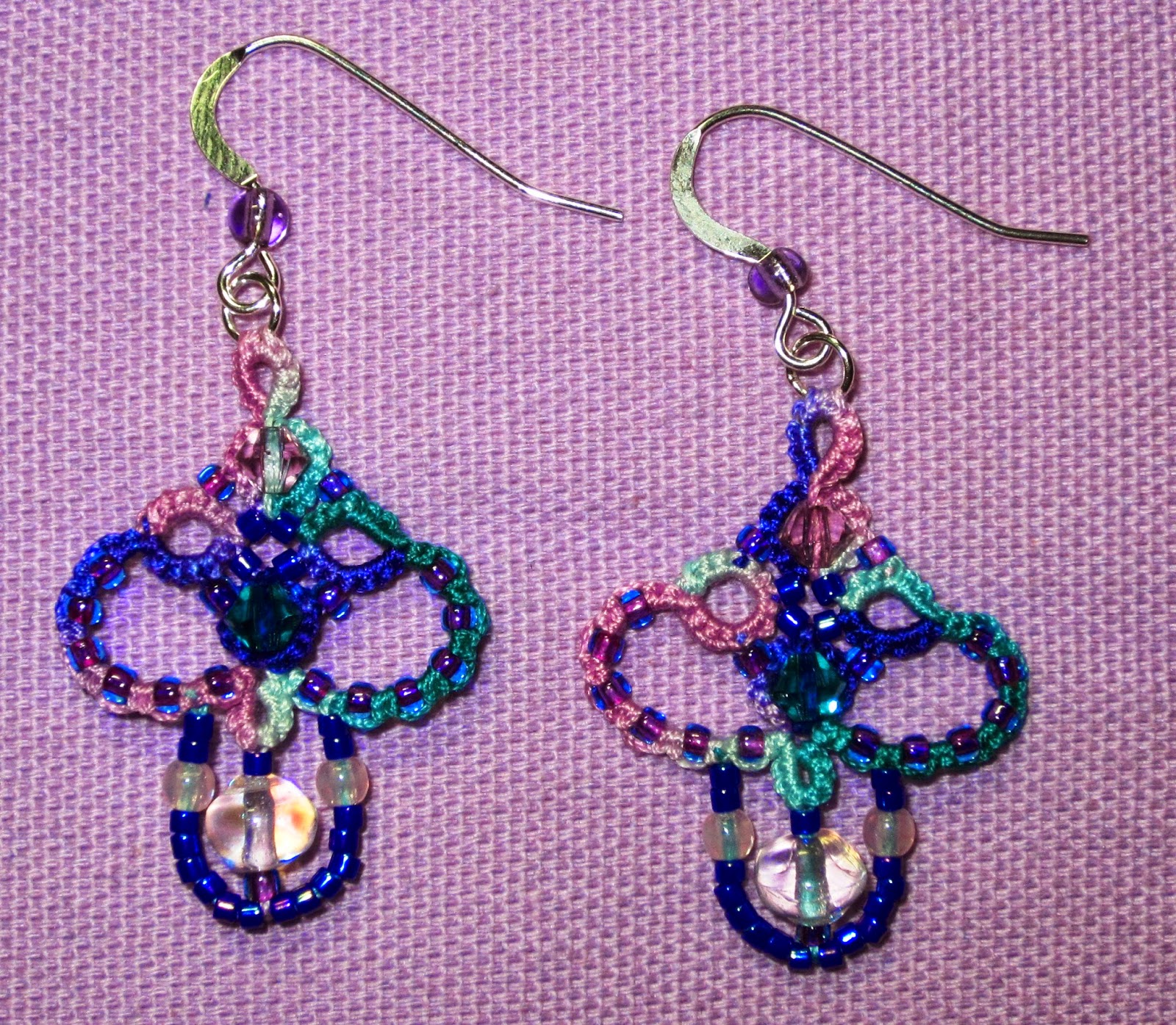 These are Jane Eborall's Multi-Beaded Earrings, tatted in Jess's "Winter Jewels" HDT. I have to say, these earrings are quite fiddly to work, though a lot of fun. The second one was definitely easier than the first, but I still can't imagine how Jane has been cranking so many of them out lately. I'm very pleased with these earrings and can't wait to go show them off.

I have also made a little bit of a start on the edging. 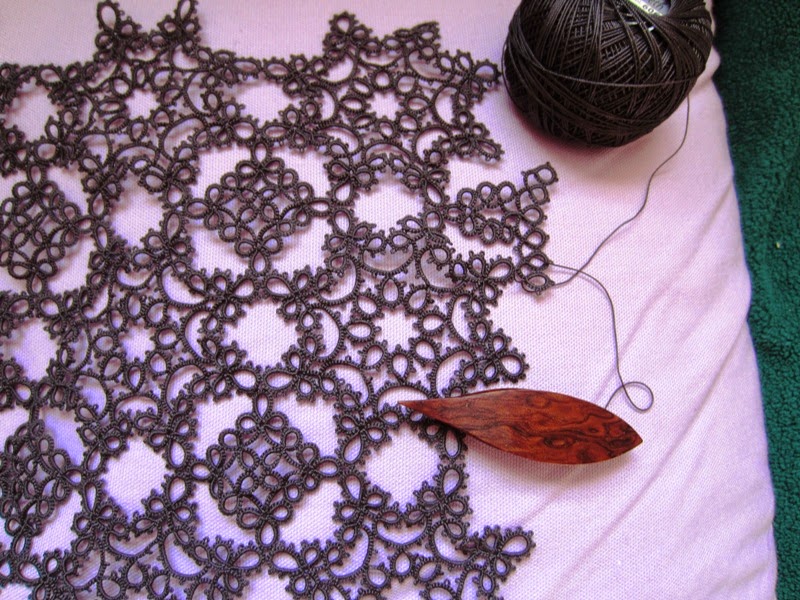 I like how the edging has points that come inward to fill in the spaces between motifs.

I'm also glad I thought to order a new ball of thread a few weeks ago. 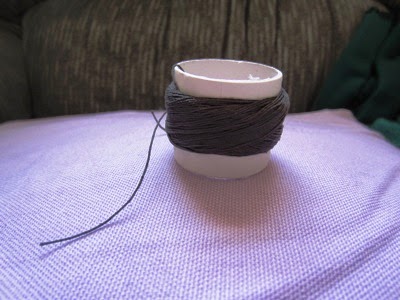 This is all that's left after making the inner part of the doily. I'll use it to refill the shuttle.
Posted by Miranda at 11:12 AM 5 comments: 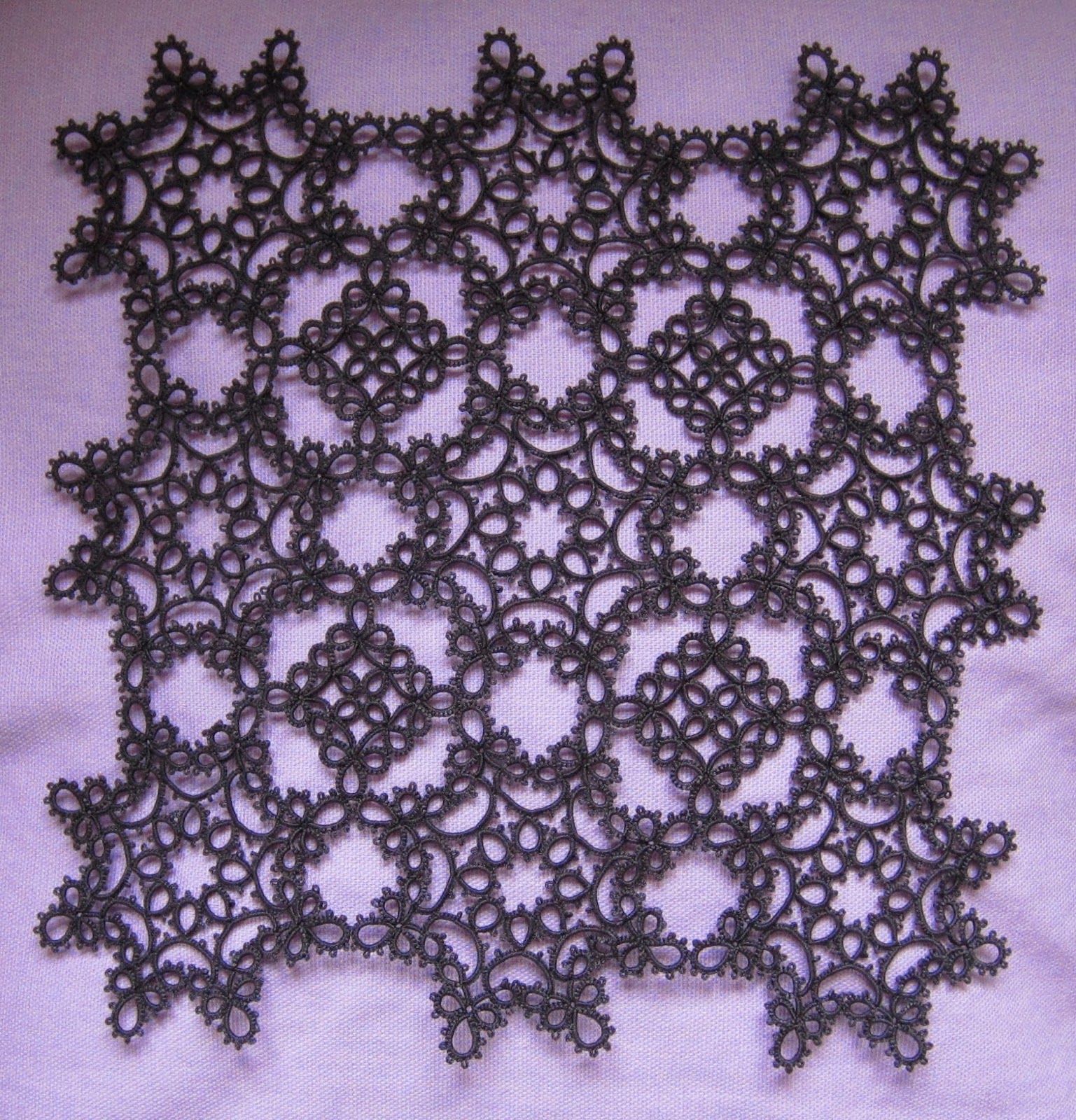 It's lying a little more nicely now too, because I dampened it and ironed it dry. Still not perfect; after I add the two rounds of edging, I will still need to pin it out properly. This was good enough for now, though.

After I finish it, I also plan to wash and dry both the doily and the pillow cover before I sew it down. I want to be sure that both are fully shrunk before I sew them together, so that if I wash them later there won't be any puckering.

And I have a sneaking suspicion I might sew the doily down this way: 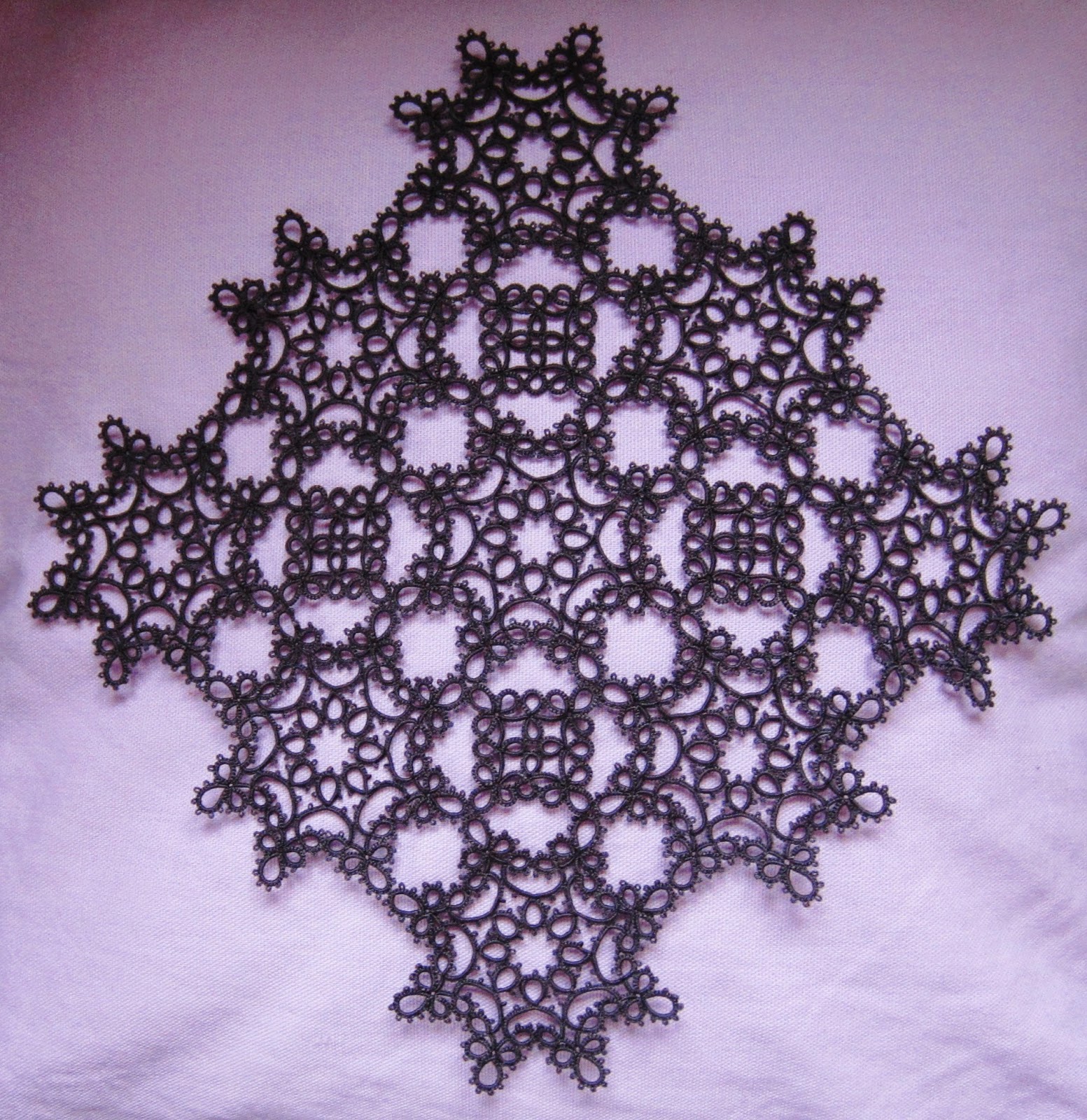 I haven't decided for sure yet. 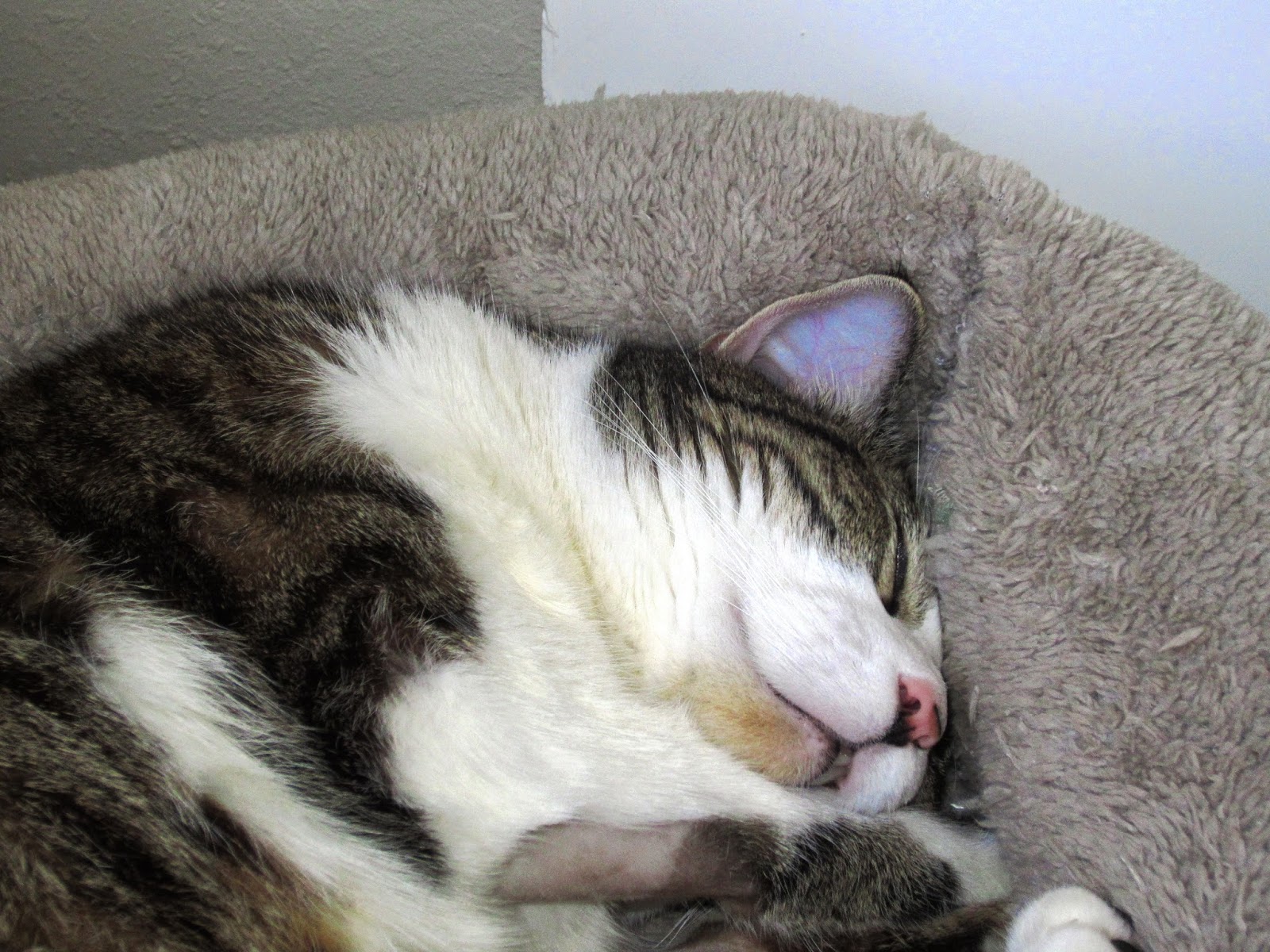 If you look at his arm, you can see he's still licking himself a lot. At this point, though, I think it's just habit rather than actual itching, like a person biting their nails. Anyway, he's only licking now, not biting himself like he was before, so that's an improvement even though he's still pretty bald on his back half. And bald or not, I think this is a really cute picture.
Posted by Miranda at 1:42 PM 6 comments: 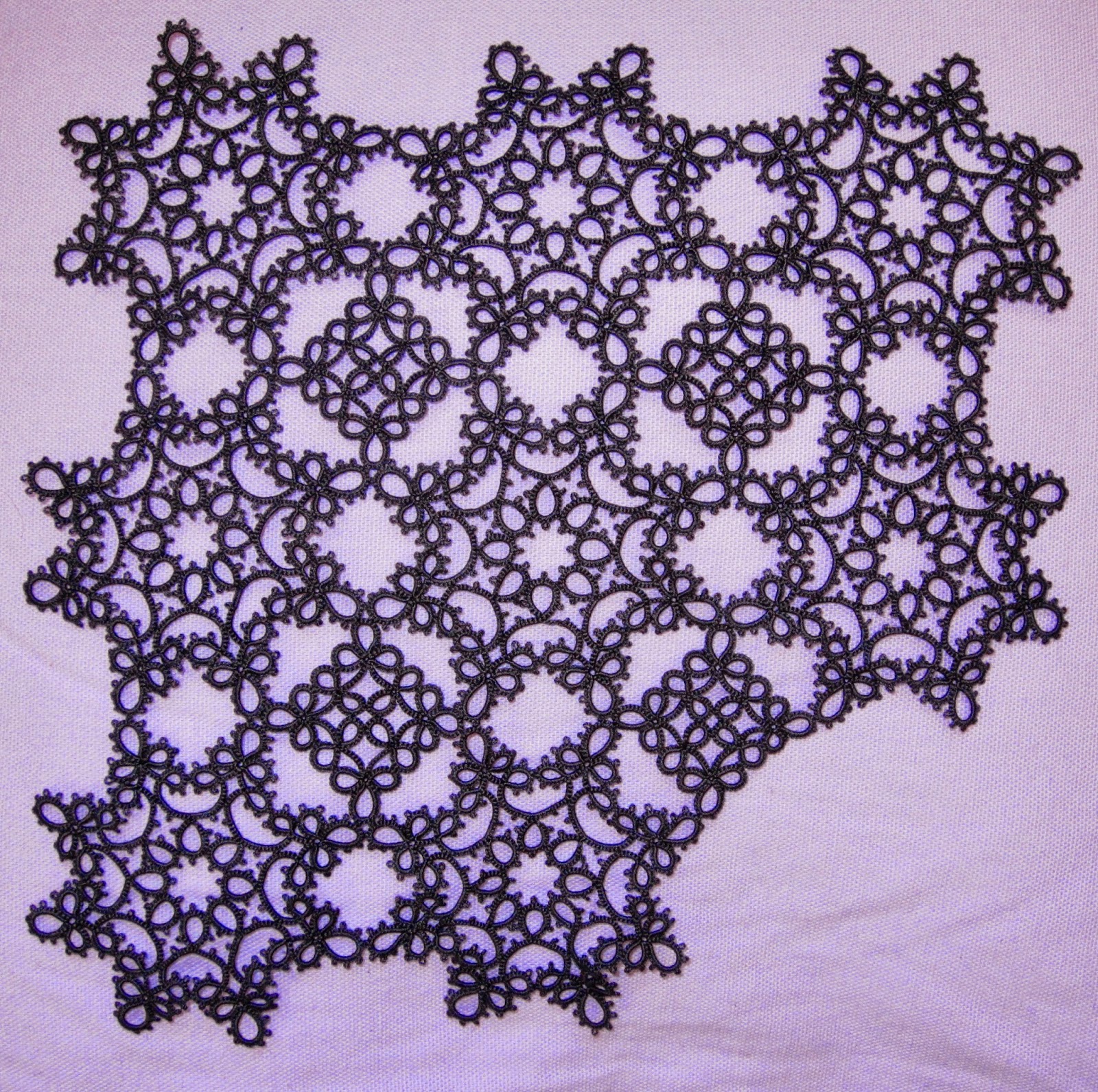 Just one motif left to make, plus the edging.
Posted by Miranda at 2:36 PM 3 comments:

I'm not. Every time I add a motif, the doily looks slightly different. Still, I don't really have anything new to say about it. 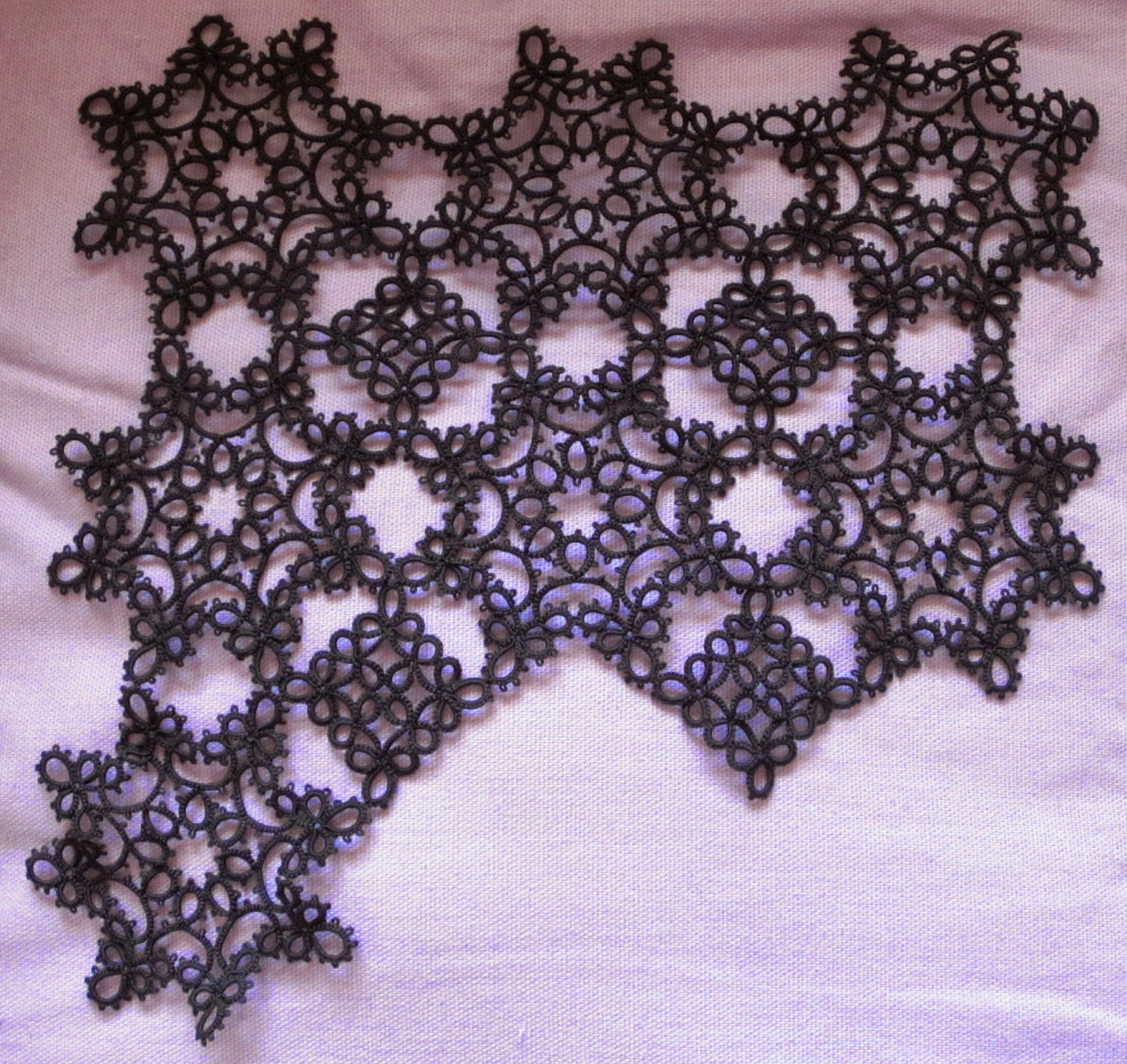 Up till now, you've always seen it pressed flat in the scanner bed. Now it won't fit in the scanner anymore, and the photo shows how much it will need to be blocked before I attach it to the pillow.

I like the geometric shapes in the negative spaces so much that I am starting to see them even more than I see the tatting.

Have you seen Frivole's latest version? At this point, she's got the smaller motifs around the outside (although I gather she is planning to continue, so it will change), and it looks completely different. This is truly a versatile pattern.
Posted by Miranda at 9:45 AM 8 comments: