I'm still plugging away at the coasters. The last one for this set is underway, but it has taken me a while. For this one, I am working from the book Tatting Together Square Motifs, published by Iris Niebach, but each pattern is designed by a different member of a designing class she once taught in Denmark. I really wanted to make the one by Ulla Bendtsen, which in my opinion is the most beautiful in the book, but there are certain joins in this pattern that distort the chains. I tried making these joins as written, I tried putting them in different places, I tried omitting them, nothing worked. I just ended up with a pile of wasted thread. 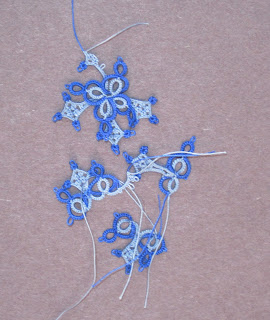 I think there were a couple more attempts, too, but these were all the scraps I could find for the photo. Does anyone have this book and have any insight into this pattern?

So I finally gave up on it and switched to the design by Elsebeth Rasmussen. This also turns out to be an interesting and challenging piece to make. In this one, you have to insert a "something" to make picots on the core thread. First, I used a paperclip as stated in the book, but this resulted in picots that were way too long; the motif felt floppy in the middle, and also it made the middle too large for the outside so that it cupped quite badly. 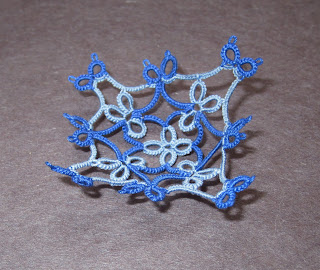 So I made it again, this time using a length of thread to make the core thread picots. Finally, I have something I can use. 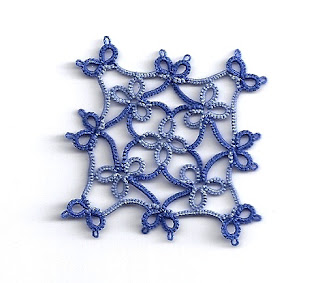 Now I just have to make three more of them to complete the large square.
Posted by Miranda at 9:58 AM 6 comments:

Sorry to be taking so long between posts. This set of blue coasters are all made of four motifs joined together; four motifs obviously take four times as long to tat, so that makes for a longer time before I have anything to post.

My criteria for selecting motifs for this set are (1) a square motif that can be tatted in a single pass; (2) the motif is interesting to tat, since I have to do four of each; (3) the use of two colors enhances the design; and (4) joining four motifs to form a larger square brings out secondary patterns where they are joined. The master of this type of design, in my opinion, is Iris Niebach. Today's motif is her "Dalia" from Tatting Fantasia. 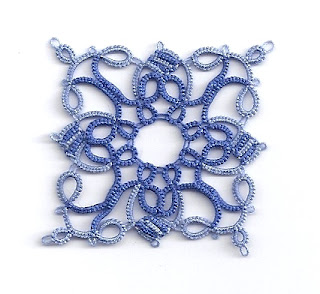 The motif does turn out to need a little blocking. Since I waited till the end to do this, rather than doing it after the first square was completed, this one got a little smushed in the scanner.

Here are the four joined together. 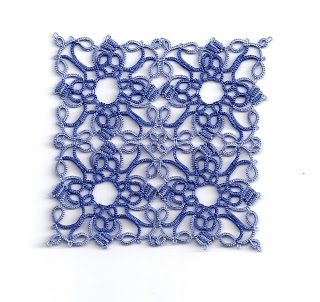 Hmm, the negative space at the center of each small square still needs a little adjusting. I'll be able to take care of this when I stitch it down to make the coaster.
Posted by Miranda at 7:05 PM 14 comments:

The next motif I chose for the set of blue coasters is Karey Solomon's "Chinoiserie" from her book Make Many Merrily. "Chinoise" is French for "Chinese", and "Chinoiserie" basically means "Chinese stuff" or "Chinese-looking stuff". Well, I don't know about that, but it's definitely a beautiful motif that is very satisfying to tat. Here's one square of it... 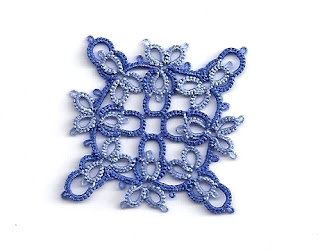 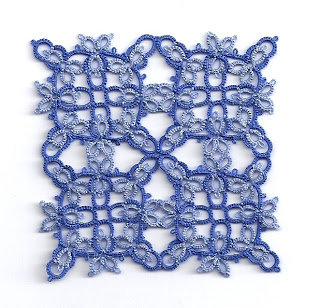 I don't know why I can't manage to lay things on the scanner straight. Don't you just love the way these motifs join together?
Posted by Miranda at 12:40 PM 8 comments: