And a purple one. This is the start I've made on the earrings to go with the pendant. 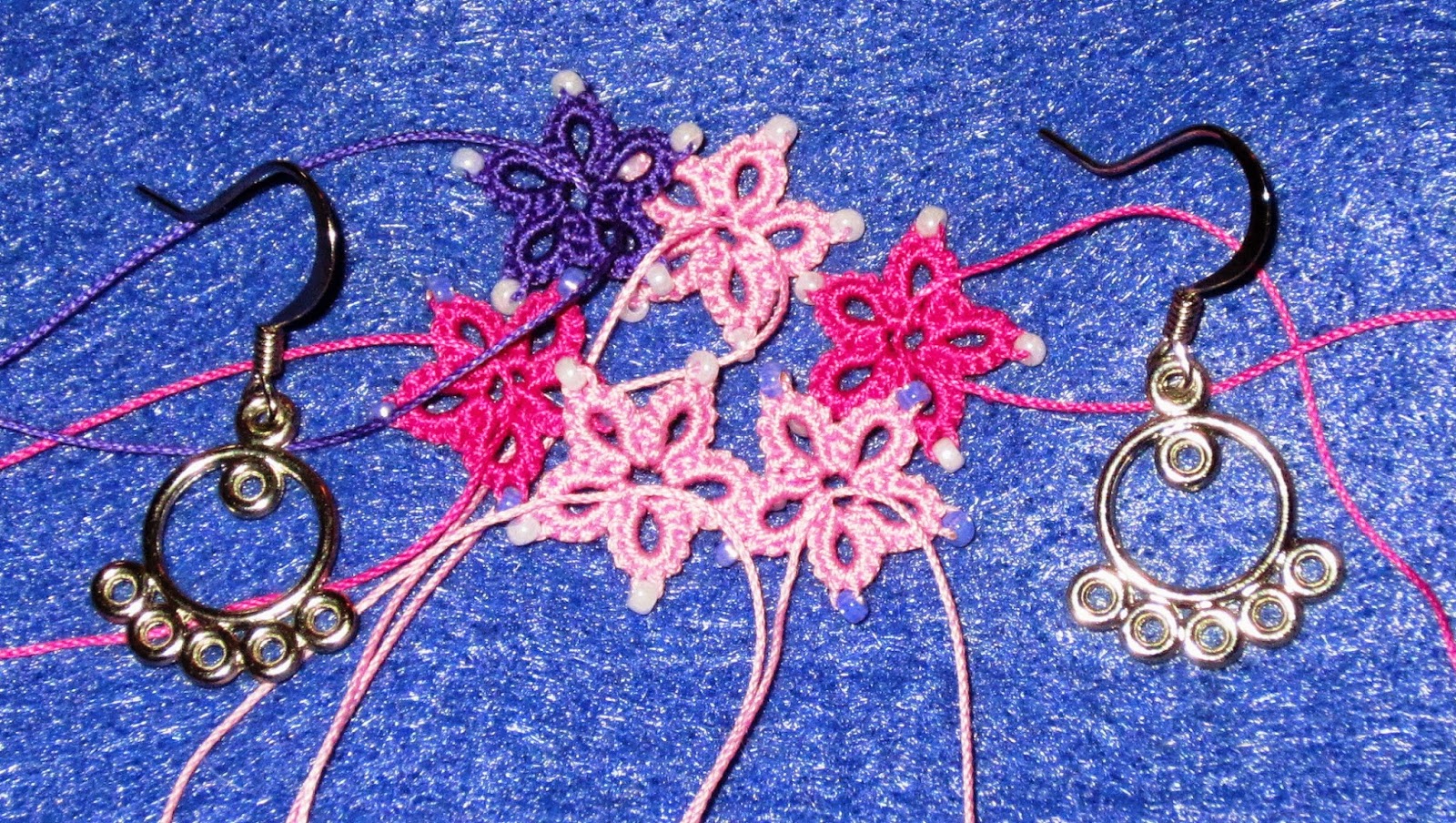 I still need to choose the larger beads to sew into the centers of the flowers, and I may or may not use them all. The only thing I have decided at this point is that, in keeping with the random look of the pendant, the earrings will not be identical.
Posted by Miranda at 11:40 PM 2 comments:

Nothing Wrong with Pink

Like many little girls, pink was my favorite color as a young child. When I got a little older, I decided I hated pink because it was too girly. That contempt for all things pink lasted until just recently, when I asked myself why, exactly, is girly such a bad thing? I still don't think pink will become a major part of my wardrobe anytime soon; but it is a pretty color, after all, and I have decided not to be completely opposed to it. Nothing like taking a firm stand on an important issue.

I bought this pretty jewelry finding a few years ago, on the theory that someday I would do something with it. I knew that would involve attaching tatted flowers to it one way or another, but I didn't quite have the vision. In fact, even when I finally started the project a couple of days ago, I didn't really know how it would end up looking; I just started tatting.

Here's how it looked with the first flower attached. 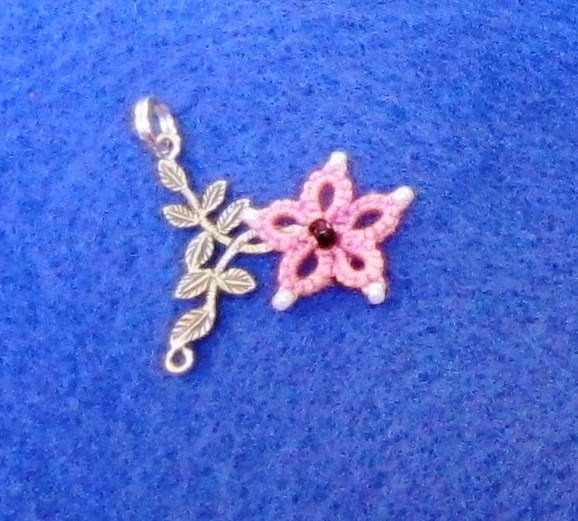 That seemed like a good start, so I kept going and eventually ended up with this: 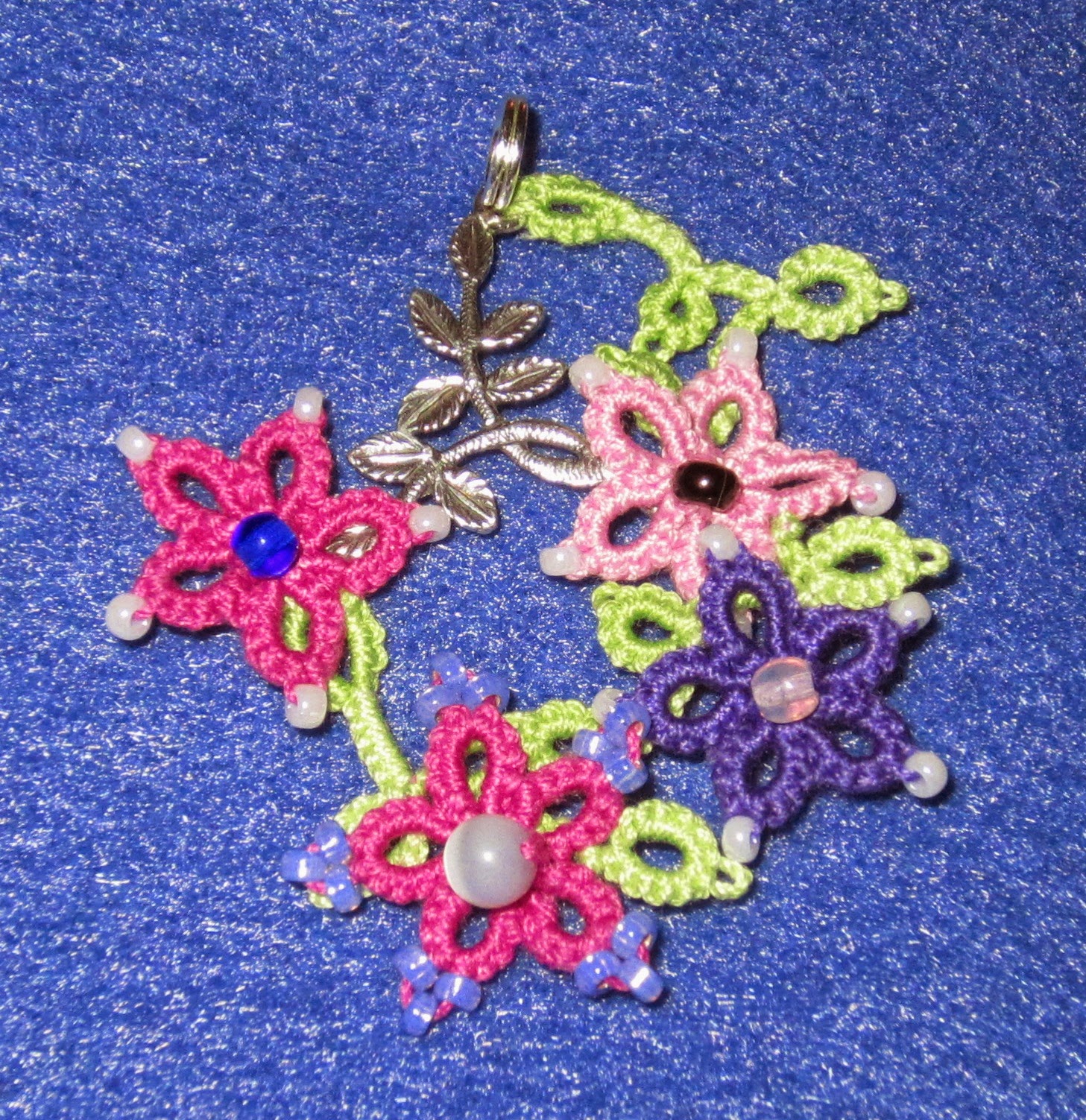 The flowers are all made the same: 5 rings of 2-4b4-2, joined at the side picots; on the bottom flower I used three beads per petal, although they're in a color that's harder to see against this particular background. After tying the ends together on the front side, I passed one end behind the flower and then back up to the front across from the other end. I then passed both ends through a larger bead from opposite directions, and finally pulled them both through to the back to tie them once more. For the light pink flower and the dark pink one on the left, I also tied them to the finding.

After completing all four flowers, I wound two shuttles to make the leaves and vines more or less at random, although I had decided on the overall shape by this time. The vines are joined to each flower in at least two places, so the flowers won't wiggle around.

Thread stats: Lizbeth size 20; the flowers are 617 Magenta Medium, 618 Magenta Dark (these two colors look very different on the Lizbeth color chart, at least on my monitor, but in real life they are definitely pink as in the above photo), and 641 Lilac Dark. The greens are 667 Orchid Green Medium and 668 Orchid Green Dark; you have to look pretty closely to see that these are different colors, but it's just enough to give it some depth.

The pendant is now on a pretty chain, but no photos of that; the more shiny stuff I add, the harder it gets to take a picture. Next up, coordinating earrings. But don't worry, Diane, I still like blue better!
Posted by Miranda at 2:43 AM 4 comments:

I made another barrette in the same style as the one in the last post, but it's on just a small barrette back, no filigree, so it's all tatting that one sees.

Once again, I forgot to take pictures of the individual flowers. Maybe if I posted more often I would remember to do these things. I did, however, take a picture of the motif I tatted to simulate leaves. 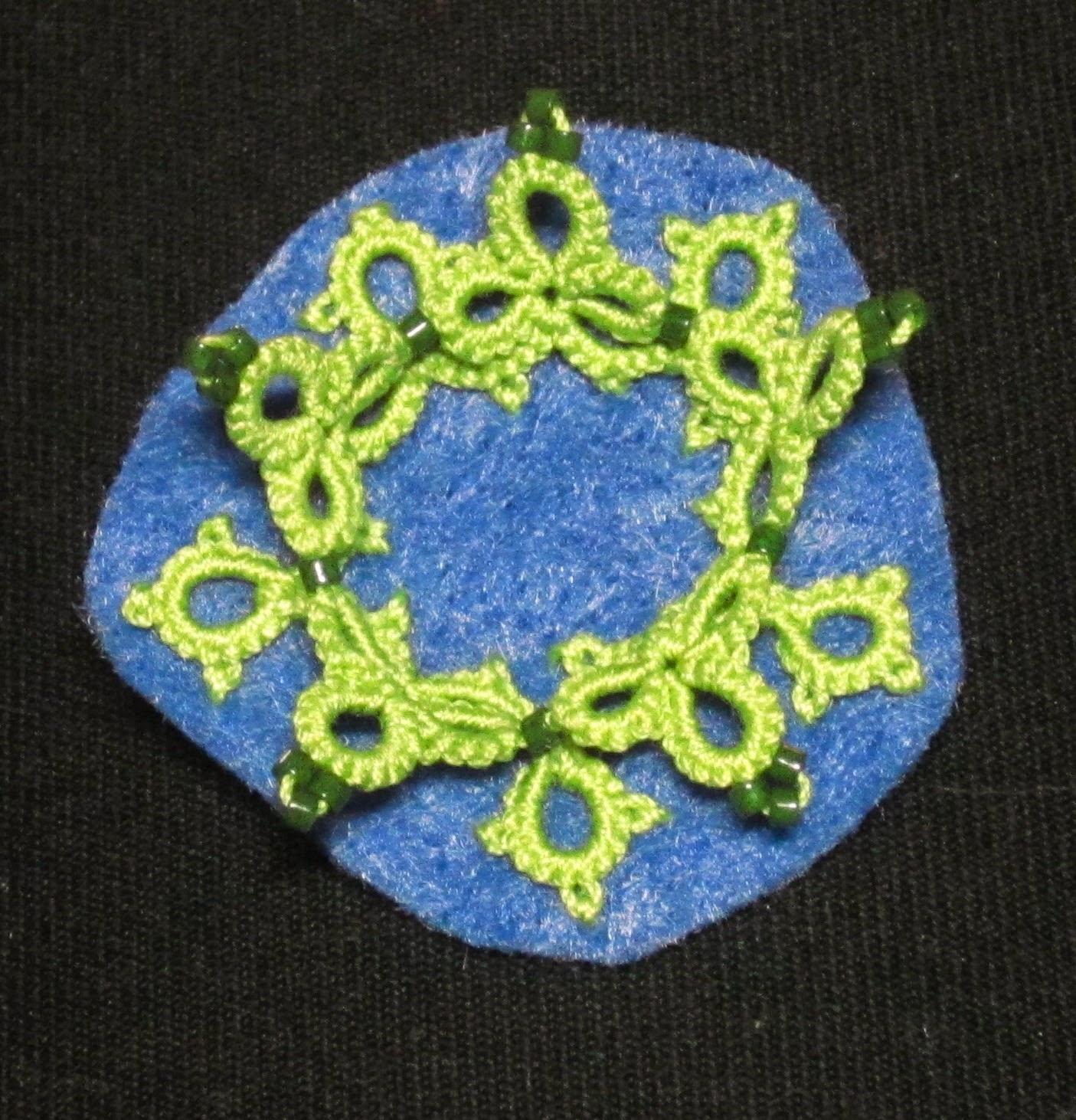 As with the previous barrette, I sewed all the tatted bits onto a felt... shape-- can't properly call that a circle, but it doesn't really matter-- then trimmed the ends down, sewed on another felt piece to cover the ends, and sewed the felt onto the barrette back. And here is the result: 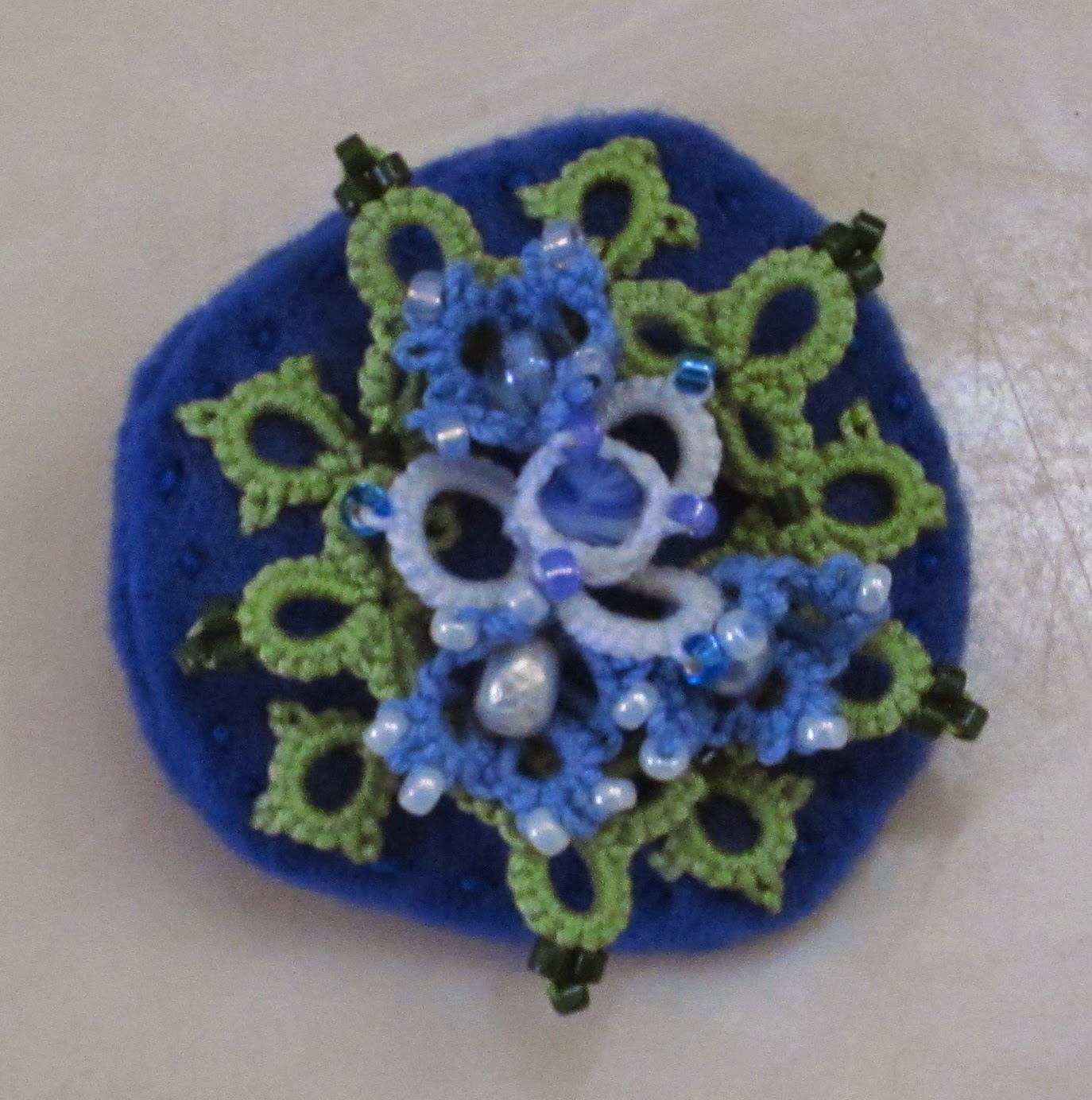 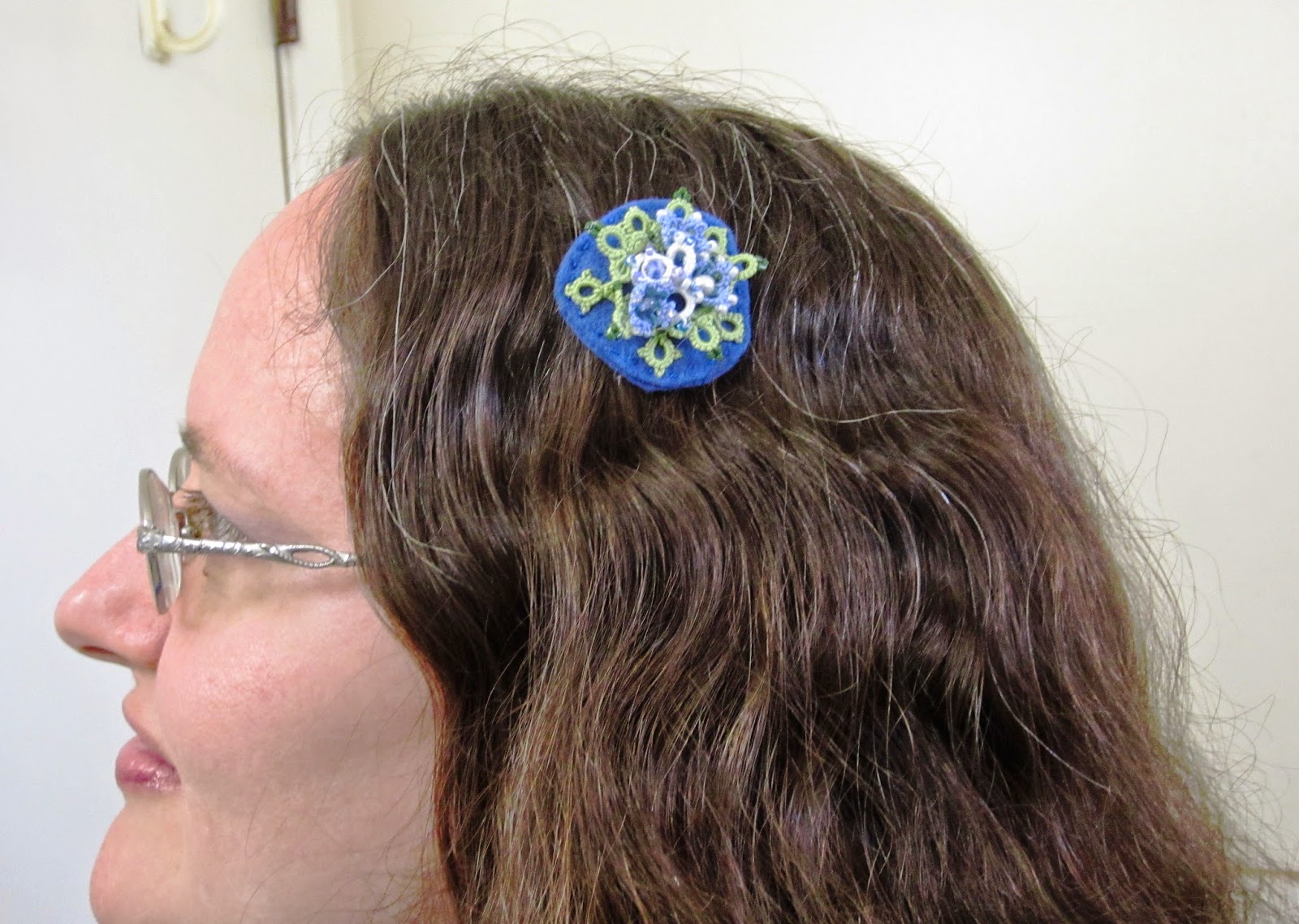 I made this piece to match a particular blue blouse I bought recently. Today I wore both blouse and barrette (and a skirt, too :P) to a harp gig, and thought it looked pretty good.

The white flower is Linda Davies' Snowdrop, and the blue ones are her Bluebells; both can be found in her book From Petals to Pearls. As with the previous barrette, I put in more seed beads than the patterns called for, and sewed in the larger center beads. All threads are Lizbeth size 20. The green is color 668 Orchid Green Dark, and the blue is 703 Sky Blue Light. The white is-- get this-- white; color number 601 if you really need to know that.

I have some other things in mind I want to tat, plus I'm still working on my Jan Stawasz doily, so I should be posting again sometime soon.
Posted by Miranda at 7:28 PM 3 comments:

Barrette, and a Bead Coupon

So it's been a while since I've posted, again. I actually haven't tatted anything since then; I've been busy with harp and belly dance related things instead. I played a harp gig a couple of weeks ago where my music stand drape made its big debut. It worked beautifully. And this Saturday my belly dance studio is having its annual student showcase, and I'll be dancing in two numbers with the beginner classes. Naturally, there is a great deal of practice involved, especially since this is my first "real" performance; my costumes required slight tweaking as well.

This weekend, though, I did finally get a little bit of tatting time. Later this month, my cousin is getting married. I already have my outfit picked out, but I needed something for my hair. I tatted several small flowers and arranged them on a circle of green felt. 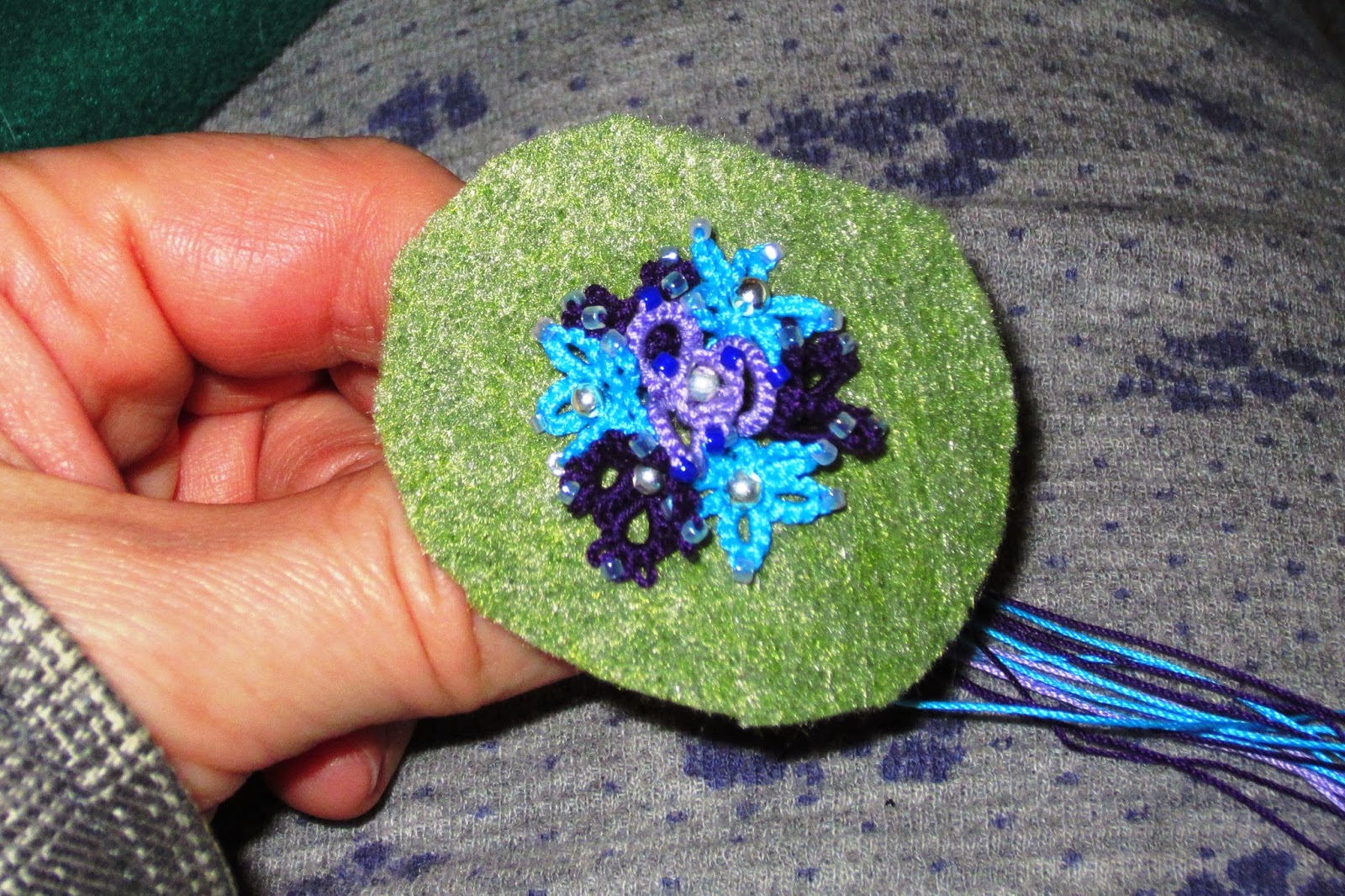 You can tell I'm out of practice blogging because I forgot to take photos of the individual flowers. They are all patterns by Linda Davies. Linda's flower patterns are always based on flowers that actually exist in nature. My versions, though, are not like the real flowers because I used the wrong colors (they match the outfit, which is what matters in this case). The light purple flower in the center is Linda's Snowdrop pattern tatted in Lizbeth 632. The dark purple ones are the Bluebell pattern, in Lizbeth 633. Both of these can be found in Linda's book From Petals to Pearls. The turquoise flowers, in Lizbeth 658, are the Queen Anne's Lace pattern which can be found on Linda's blog. To all of them, I added a 4 mm round silver bead which I sewed in the center of each flower (in the bluebell pattern, this bead would ordinarily be threaded into the flower using florist's wire; the snowdrop pattern also has a large bead but placed differently), and I also added a few more seed beads than the patterns called for.

I left all the ends long, sewed them through a circle cut out of green felt, and tied them off. I then trimmed the ends down and used a matching green tatting thread to sew an identical felt circle to the back, covering the thread ends. Next, I trimmed the doubled felt circle down a bit and sewed it onto a silver filigree barrette. 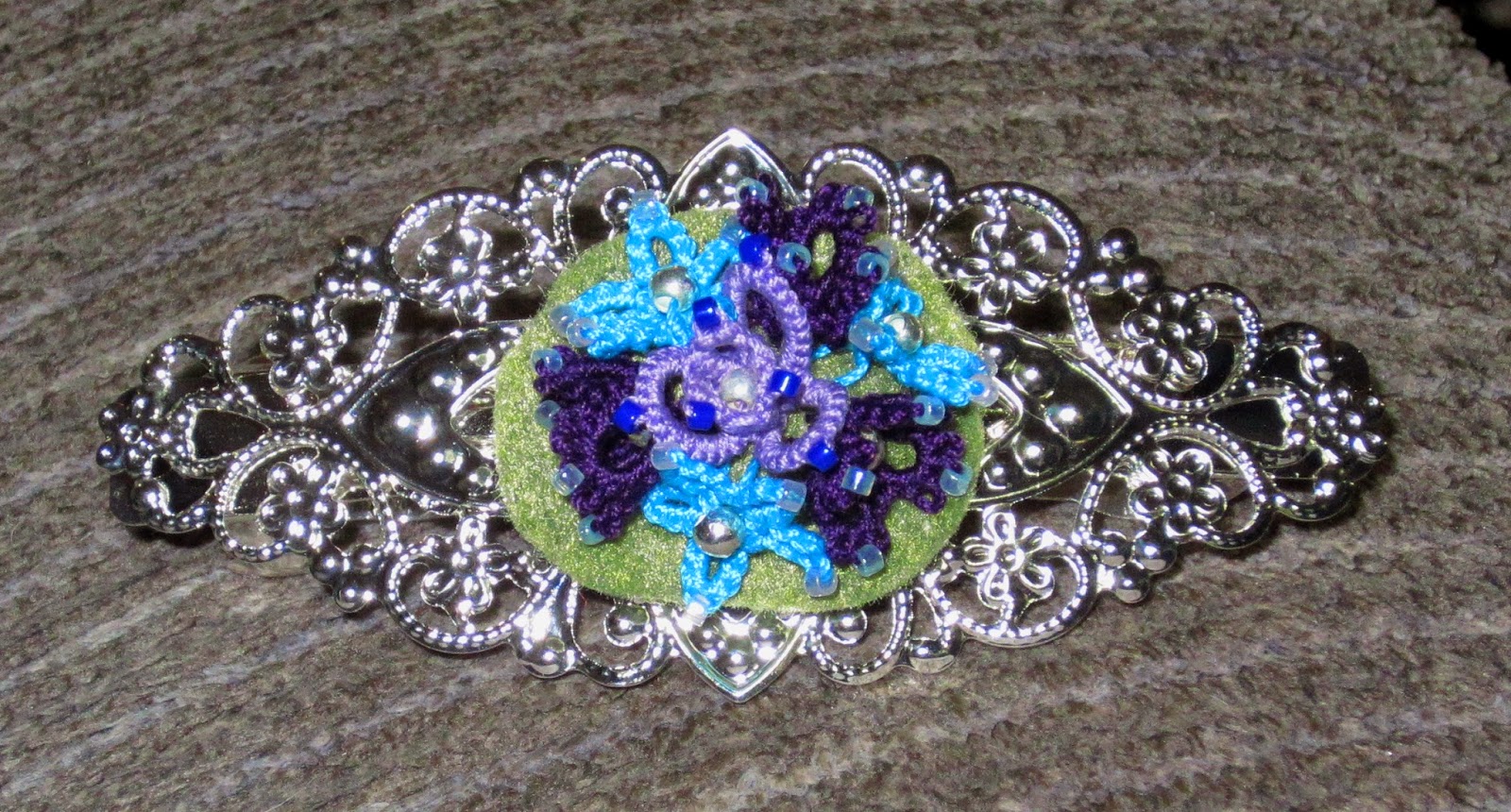 Finally, I have a little something to share with you all. The website www.artbeads.com, which is one of my favorites, sent me a coupon code for 20% off sitewide. Artbeads has a great selection not only of beads, but also jewelry findings, and especially the metal links and filigree ornaments that we tatters usually refer to as "doo-dads" that tatting can be joined to. To find these doo-dads on the site, look under Findings, then Links; also under Embellishments; or shop by material choosing the type of metal you want; and also under Swarovski components, because some of them incorporate Swarovski crystals. The e-mail specifically says that I can share the code, and it can be used multiple times. The code is BEST20, but if you want to use it you'll have to hurry. It expires tonight, Monday March 2, at midnight; I'm not sure which time zone that refers to, but I would assume Eastern. Note that I have no connection to Artbeads other than being a very happy customer. Enjoy!
Posted by Miranda at 9:29 AM 4 comments: