That's Quick Little Tats. I want to have a few things available at the sale for people who don't want to spend a lot of money, just little things that are quick and easy to make.

First up are Heather Johnston's "Chandelier" earrings from her book Tatted Earrings and Things. 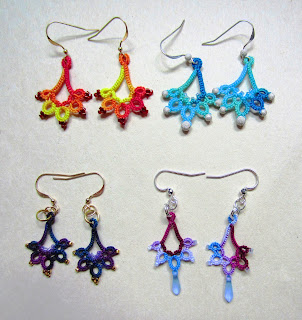 Next is Jon Yusoff's dragonfly pattern. 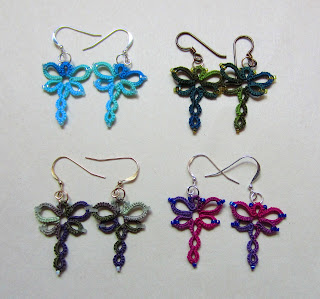 In the past when I have done this pattern, I've always done the second version, where you end with the head as a split ring, leaving the ends long for antennae. Why hide ends if you don't have to? But for these, since I needed to join the head to a jump ring to make earrings, the split ring didn't work; so I had to do them the other way, ending with the bottom right wing.

These are all done in size 20. The threads on the top row are "Coral Reef" and Krystledawne's "Sea Glass". On the bottom row are Krystle's "Vineyard at Dusk" and Tatskool's "Berry Burst".

Finally, a large bunch of earrings made from Sherry Pence's Treble Clef pattern. 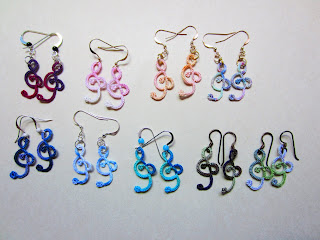 This pattern is so quick that I can make a pair of earrings in 45 minutes. And if you start CTM and make the final ring as a single shuttle split ring, tatting over the tail of the other thread in the first half of the SSSR-- voila, no ends to hide! I should probably give a few of these the damp iron treatment, though.

There are just a few more pairs of earrings I want to make, and then I'll start concentrating on other things, like bookmarks and Christmas ornaments.

Quick note to jewelry makers: Artbeads is having a nice sale on earring findings right now.
Posted by Miranda at 2:01 PM