I haven't posted for several days because I've been out of town. We had a big family gathering in northern California. It was fun, but I am glad to be back home.

I started this a few days before I left and finished it while flying/ waiting in airports. 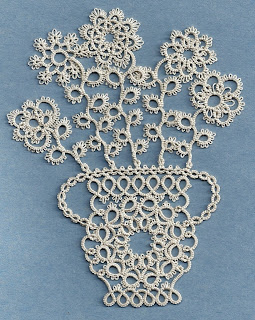 It is, of course, the Flower Pot II again from Tatted Treasures by Jan Stawasz. I hope to get it stitched down onto some fabric in the next day or two. I really liked the all white version of the Flower Pot I that I made. The colored pictures are fun and pretty, but I really think that tatting it all in one color enhances the lacy effect much better. For this one I used ecru, and I'll probably put it on a dark green background.

I just threw this on the scanner with a piece of construction paper behind it so you can see it. One thing about these flower pot designs is the stems just kind of flop around till you sew them down, so laying it on the scanner like this doesn't always make for the best layout. I'll spread the flowers out more as I stitch it down.

You may notice that I changed some of the flowers. I mentioned when I tatted the color version of this that a couple of the flowers, while they looked OK in colored threads, did not appeal to me in monochrome. Therefore, I replaced them with other flowers from the book and rearranged the order in which they are placed.

I also made a very slight change to the vase. I lengthened the chains that lead down to the bottom section by several stitches, and I think it lies much better this way. When I made it using the original stitch count, I had to tug on those chains pretty hard and sew them extremely carefully to make the bottom row of rings lie in a straight line.

Most of my family spent a large part of this vacation doing wine-tastings in Sonoma County. This gave me a fair amount of tatting time. As far as I'm concerned, all forms of alcohol taste equally vile, and there's no reason to keep tasting it. Instead, I got a fair start on a butterfly. 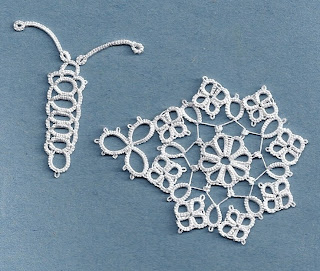 This is going to be "Kirsten" from Adelheid Dangela's book Tatted Butterflies. I've got three rounds left on this wing, then three more wings to make. It's a pattern I've always thought was really beautiful, but I was put off by the long unworked thread spaces and the number of cut and ties. But sometimes you have to do that to achieve the look you want, so I decided to go for it. I also changed the antennae; I'll explain about that when I post the finished butterfly.

You still have a few days to submit names for the new pendant. I'll be announcing the winner on Friday.
Posted by Miranda at 12:48 PM