I finally had time to make the flowers of my current Jan Stawasz project. All that remains is the stems. 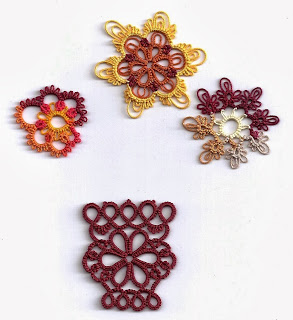 From left to right, the flowers are made from Lizbeth color 100 Falling Leaves; 694 Harvest Orange, 673 Terra Cotta (the same color as the vase), and 613 Golden Yellow Medium; and 612 Golden Yellow Light and 169 Autumn Apple Pie.

I think my double picots came out a little better this time around. A picot gauge would make them perfectly even, but I think they're close enough.

I've also got day 7 of the TIAS done. 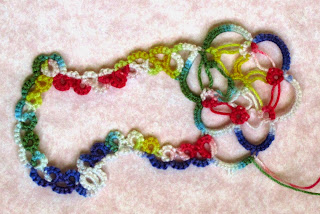 All I can think of at this point is a cuttlefish, with tentacles to be added later. I do notice a couple of points that may be telling, except they're not actually telling me anything. The way this most recent part joins to the round section does not quite match the way the first chain came off of the round section, so we're definitely making something asymmetrical. And the only joining picot available at this point is the one on the last chain we made. Although we could also join at the bases of the rings, this does seem to indicate that the most likely direction for the next section will be down (in the perspective of this picture). Still, it doesn't really give me any clues as to what it is.
Posted by Miranda at 7:35 PM