So, my cousin's wedding is coming up in just over a week. It will be outdoors, weather permitting. There are numerous reasons why outdoor gigs are a bit of a hassle for harpists. We usually don't complain, except to each other on the Harplist. But the one thing I absolutely will not tolerate is my hair blowing in my face while I'm trying to play. My hair is very long and somewhat curly, so all those silly little clips and combs and bobby pins from the drug store are completely useless to me. Having no desire to drive all over town looking for an acceptable hair accessory, I decided I could make my own.

Naturally, it has to match my outfit, which in keeping with musicians' tradition will be black. But the hair accessory can't be plain black, because that looks stupid against my dark brown hair, neither blending nor contrasting. So I decided on black with some sparkle.

Start with a plain, ordinary barrette.

Cover it with pearl tatting in size 20 black Lizbeth.

Size 20 so that the somewhat sharp edges of the barrette don't wear through it too quickly. Pearl tatting for two reasons. First, so that there will be double stitches on both sides of the barrette for symmetry and a finished look. Second, for picots. I didn't want to spend a lot of time working out how many DS I would need between joining picots; I just wanted to have a picot there whenever I needed to join. In pearl tatting, there's automatically a picot after every DS on each side. That's why it's called pearl tatting, in fact; "pearl" is an archaic term for "picot".

Finally, add an edging in black and silver threads with beads. 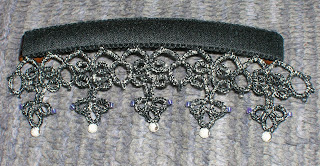 I know it's not the greatest picture; it's late and I don't feel like looking for a better background. You get the idea, though. The edging is Number 15 from Anne Orr's Classic Tatting Patterns. The threads are black Lizbeth size 80 and silver Coats and Clark metallic. The beads are Miyuki delica seed beads in hyacinth and 3mm stardust silver beads. I should have also put a seed bead on the free picot of each large ring, but I didn't think of that until after the shuttle was already wound.

The two threads together tatted up around the size of a size 20, primarily because I loosened my tension so much so as not to break the metallic. I probably could have tatted a little tighter, but I really didn't want to deal with a lot of broken ends so I played it safe. I had no idea it would end up so nicely centered, either; it was just one of those "start tatting and hope for the best" things that happened to work out.

Tomorrow morning I go for one final practice session on a friend's harp, which is much more similar to the harp I'll be renting (no way am I flying with my harp) than mine is. Then laundry, packing, and off I go!
Posted by Miranda at 12:57 AM