Yesterday I mentioned that I had been playing with Marilee's "Five-Petal Pendant" pattern. When I first saw the design, the first thing I thought of was a dogwood. The petals were exactly the right shape; all I had to do was figure out how to make only four of them. 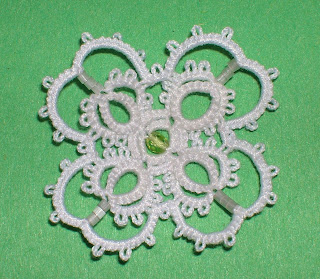 Very nice, but all the decorative picots that look so pretty on the 5-petal version are distracting here. Plus, I used too small of a bead in the center (3 mm instead of 4). 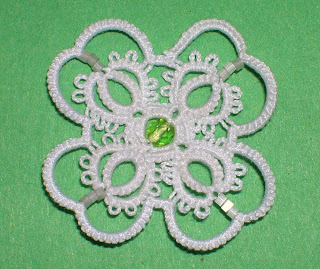 Hmm, I thought I would like it better with no decorative picots, but I don't. I had to leave the decorative picots on the inner round because they help fill in the petals; having none on the outer round is too much of a contrast. Also, not having a picot on the short chain between petals somehow separates the petals too much. 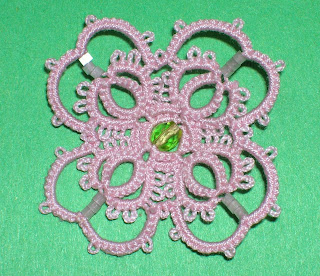 Here I found the right number of picots to make it look balanced. This one makes me happy.

I used size 20 Lizbeth in White and Dusty Rose Light (621). The center beads are Czech faceted 4 mm in a light green. The other beads are Miyuki Delicas satin finish in "Linen" color. If I do this again I'll try to find a bead that is a bit more of a true tan.

Now for the tricky part-- how to explain what I did in a way that people who have the book will understand, but not give away the pattern to anyone who hasn't bought the book. On the central SCMR, I made only 4 picots; adding one extra DS between them will space them evenly without significantly changing the size of the SCMR. In round 1, I compensated for this extra DS by also making an extra DS between petals. The stitch count on the petals is exactly the same. In round 2, the total number of stitches per petal is the same; in the final version, I left out the middle picot in each long chain. The short chain between petals is also the same; because it has to reach a little bit farther between the petals, this causes the flower to cup just a little, like a real flower. 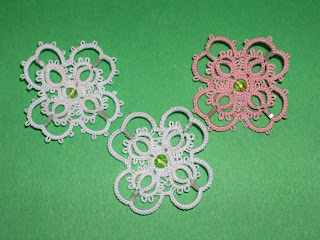