That's the mantra for every performer and writer. The corollary for crafters is, when making a gift, know the recipient. 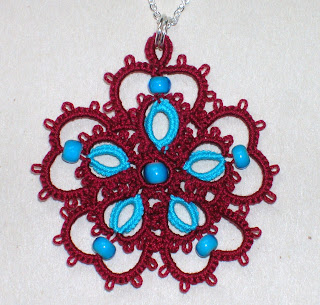 In this case, the recipient will be my Grandma, whose birthday is coming up soon. She has macular degeneration, which means that what she sees best is bold, solid, primary colors with a lot of contrast. She won't be able to see the detail of the stitches, but she will be able to see these colors and the shape, and she'll be able to feel the beads.

This is the "Five-Petal Pendant" from Marilee Rockley's book Up and Tat 'Em. I've been doing a lot of Marilee's patterns lately. I swear she's not paying me. The threads are Lizbeth Victorian Red (670) and Ocean Turquoise Light (658).

The pattern just calls for one color, and it is much easier if you can start CTM. Since I wanted contrast, I started out by finger tatting the SCMR around the center bead, using the end of the red thread like a shuttle; that way I basically was starting CTM. I continued finger tatting the first chain after the SCMR, and when I got to the first ring, I attached the turquoise thread to the red tail and tatted over the tails. Where the chains in the first round join to the center SCMR, I used slope and roll joins to avoid the color blip that would happen with lock joins.

Grandma also has arthritis, so I didn't want the necklace to have a fiddly clasp. A good strong magnetic clasp is perfect. 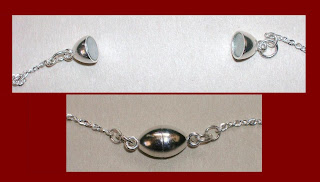 Right now I'm playing with Marilee's design a bit. I'll show you the results soon.
Posted by Miranda at 12:21 PM