Holy cow! Many thanks to the 768 people who have visited my new pattern page in the last 40 hours! And to the 697 of you who couldn't actually get to the patterns, I am so sorry! I have now fixed my settings on Keep and Save so that my patterns are publicly shared, so you'll be able to see them now. If you couldn't get to the patterns before, please try again!

A few weeks ago, I posted this bookmark, and I commented that the Tat-ilicious HDT would also look great in Jon's Chinese Coin bookmark. I still think so, but I opted not to make it at this time, because I realized I already have a Chinese Coin bookmark in a purple variegated thread-- a pastel set of purples, but still. I decided it would be better to choose a different pattern.

This is "Interlocked" by Karey Solomon, from her book Tat Marks the Spot. I altered the second end (top) because I was running out of thread. Not that I don't have more of it, but I didn't feel like winding more on the shuttle. According to the pattern, the top should have looked just like the bottom, and if I had done that I would also have added a tail. Instead, I improvised a sort of crown at the top which I think makes it look finished enough, and took almost exactly as much thread as I had left.

I have to admit, it took me a while to finish this one. It is all rings, and all of them except at the two ends are identical. I think it looks very nice in this particular thread, but to be honest, it wasn't that much fun to tat. I like more variety in a pattern when I'm working it. It was worth it, though. I really like the end result.

I got a couple of fabulous packages in the mail yesterday, one from Handy Hands and one from Martha Ess. 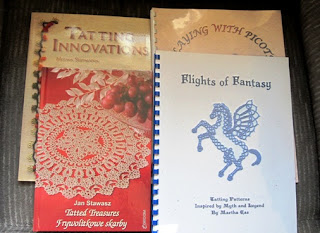 I think I might be able to find a pattern or two to tat.
Posted by Miranda at 10:51 AM