I decided to add this separate post on the non-tatting-related advertisements from Needlecraft that I found interesting/ amusing.
As a musician, these first two caught my attention. 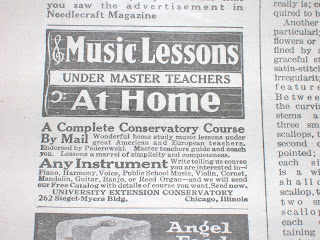 Certainly there are many fine self-taught musicians. But to call it a "complete conservatory course" when your teacher will never hear you play to be able to give you feedback seems a bit over the top. That ad seems downright sober and sensible, though, compared to this one: 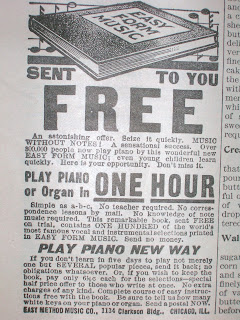 An hour? Really? They must have been counting on the fact that most disappointed customers would find it too much trouble to mail the book back.
Here's another skill that today we would never dream you could learn by correspondence. 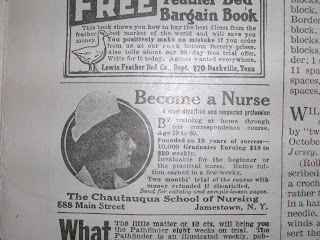 Of course nurses didn't have the same responsibilities as they do now, and licensing requirements were not as stringent. However, I don't understand how anyone could think you could learn to be a nurse without your instructor ever seeing you at the bedside.
I'm also once again astonished by how much money has changed in almost a century. Back then $18-30 a week was a really good salary, especially for a woman. Today that's about what nurses make per hour.
Sometimes the line between articles and advertising was a bit fuzzy. 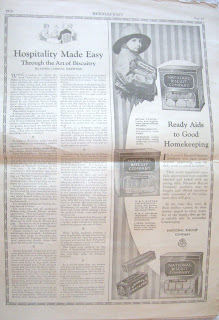 At first glance, I thought this was a legitimate article. Then I saw the more obvious ad on the other half of the page; then I actually read (well, skimmed) the "article" and realized that far from being about making biscuits, it's really just a list of ways you could use National Biscut Company products as a housewife and hostess.
Some companies still do this ad-posing-as-article trick today, and some media outlets still accept it because it's cheaper than writing their own copy. One hopes that today's readers and viewers are media-literate enough to recognize the tactic, but sadly, many aren't.
Finally, one example of how times have changed for the better: 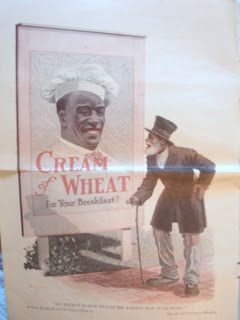 In those days nobody saw anything wrong with this; the magazine's largely white audience would actually have found it funny. At least we have advanced beyond that.
This concludes my series from Needlecraft. Please leave a comment if you've enjoyed it. And if you have any antique needlework magazines hiding in your closet, dig them out and show them on your blog!
Posted by Miranda at 10:08 AM