I've really done much more than this... 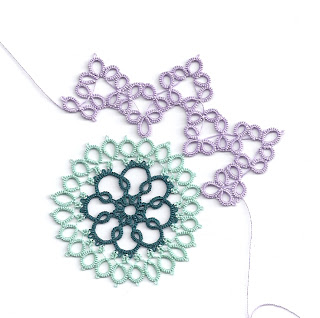 ... on Janet Carroll's "Starburst" doily, but you can't see it because I kept on cutting it off and throwing it away. A couple of posts back, I showed my first start on round 4, which I cut off because I had made the thread spaces between the rings too short. The next attempt, I broke the thread after only five rings; it was so close to the beginning that I decided it would be easier to start over than to join on a new thread. Next I discovered, way too late to fix it, an error in the pattern; repeating the error all the way around would have looked funny, so out came the scissors again. On take 4, I did everything correctly, but it still just didn't look right. I decided that this was because I was making my joining picots too short. Snip, snip.

By this time, I had used up most of the thread on the shuttle and still hadn't gotten past the first repeat. All for the best, I decided, and emptied the shuttle and refilled it with a different color. Actually, I had originally planned to make this round lavender (this is Majestic color 813, by the way, and I wish you could see the way it looks under the OttLite), but if you recall the last look you had at it, I was using the dark teal. I had gotten some idea that using the same color for this "middle" round that I had used for the center and plan to use for the outer round would tie it all together very nicely, especially because the shape of this round echos the shape of the outer round. But that would have meant using the lavender on the next round instead, and ultimately I felt that that was going to look too random. Putting the lavender here breaks up the teals better. The next two rounds will be in the light teal and the outer round in the dark teal. Thus, the pattern of the colors from center to outside will run ABCBA.

I'm finding the mathematics of this pattern fascinating. Most round patterns have the same number of repeats in every round, or else each round is a multiple of the number of repeats in the center, but this is not the case for this doily. The center (rounds 1-2) has eight repeats. On round 3, the repeat is much smaller, so that three repeats in this round fit into one repeat of the previous round, for a total of 24. Twenty-four is divisible by many numbers, so there was no particular reason why she had to go back to eight for the next round, and in fact she didn't; round 4 has 12 repeats. Then the next two rounds have 72 repeats (12x6=72), each repeat being a single pair of rings.  (Actually round 6 is a little more complicated than that, but it's close enough for this discourse.) Then finally round 7 has 18 repeats (72/4=18). Thus we go from 8 repeats to 18 in a perfectly balanced manner. OK, so it's simple multiplication and division; it doesn't take much to fascinate me.
Posted by Miranda at 9:56 PM