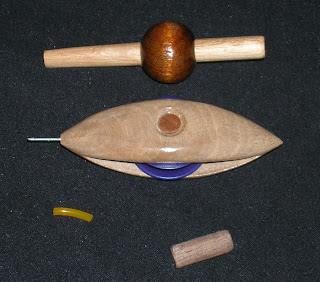 Many thanks to Jane, Sally, and most especially "I'm in the garage" for my brand new walnut Pop-a-Bobbin! I'm enjoying it so far. Unlike other bobbin shuttles I've used, this one grips the bobbin just the right amount so that it neither sticks nor unwinds willy-nilly. It's a bit fatter than what I'm used to holding, but I can see that it needs to be that way to hold the bobbin, and it's just a matter of getting used to it.
Here's what I've done with it: 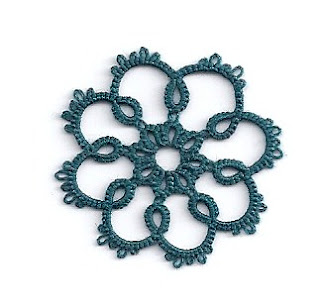 This is the first two rounds of Janet Carroll's "Starburst" doily. The thread is Majestic size 80, color 850. I'm going to be doing this in shades of teal and lavender. If you have Carroll's book Elegant Tatting Patterns, take a look at the photo. It doesn't look like that much, does it? I mean, it's a very good design, perfectly proportioned with lovely negative space, but in plain white there's not really anything to set it apart from the other eight million doilies in the world. That's why I'm doing it-- I want to see what it will look like in colors. I think and hope that it will be amazing.
After this, the entire rest of the doily is rings only, with bare thread spaces between. Thus the big challenge of this project will be to keep these spaces even. I won't even be sure how long to make them until I try. There are measurements given in the pattern, but that's for size 30 thread. In size 80, the whole thing has a much smaller diameter, and thus the thread space lengths have to be shorter as well.
The other challenge, of course, will be to keep the cat hair off of it. That's always the challenge around here, but it's an absolute must if I want to enter it in the fair.
A couple more things about the Pop-a-Bobbin. Any tips on winding the bobbin more evenly? 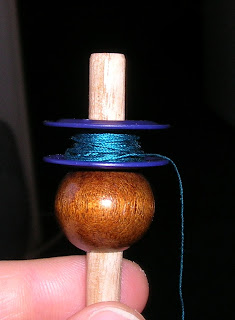 Also, if I want to purchase extra bobbins, is it just the standard Aero ones? All advice appreciated!
Posted by Miranda at 7:14 PM