The second "Emily" doily is now finished, but not blocked yet. I haven't had a chance when I would be around to keep an eye on Squijum the pin-muncher for the entire time it takes to dry.

The doilies are pretty and elegant in all white, but I have to say, I'm really a fan of color. 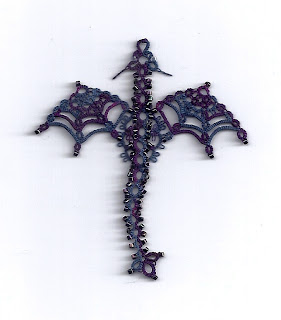 This is, of course, Anne Bruvold's Flying Minor Norwegian Dragon, to which I added a lot of beads along the spine and tips of the wings. The thread is one of LadyShuttleMaker's; I think the colorway is "Royalty", but I could be wrong. Sherry? It's size 80.

This pattern calls for SSSR's for the tail and neck, but I always make it with regular split rings instead. You have to add a second thread anyway to make the chains on the body, and that gives you two extra ends to hide. If you start with two threads CTM from the beginning, then you already have what you need when you get to the body and don't have to hide any ends till you finish the head.

I have an idea to tat a second dragon and have their tails twined around each other. I think it will work, but of course I won't know until I try.
Posted by Miranda at 10:56 PM