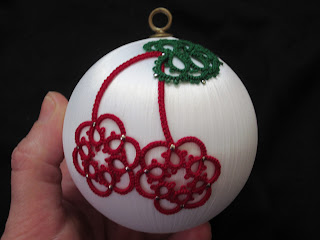 This is Nancy Tracy's cherry pattern, more or less. As I was making the second cherry, I noticed that I had made the first one too big by one repeat, so I made the second one to match it. And because I was making it in colors instead of all white, I obviously couldn't tat the leaf continuously with the cherries. Instead, I made a lock stitch and small picot at the end of the first stem and reversed work, then worked my way down the second stem to make the second cherry. I joined the green thread to that small picot between stems to start the leaf. I used balance double stitches for the stems to help them lay more nicely.

The legend of the cherry tree has its origins in the Apocrypha. The version that has come down to us in song is slightly different from the original, and there are many different Cherry Tree Carols. It's quite possible that none of these may be the one you know. First is a tricky (at least on the harp) Appalachian tune called "The Cherry-Tree", arranged by Thom Dutton. Next is an English version arranged by Sylvia Woods (if you like harp music, visit Sylvia's website-- she has has best selection of harp CD's of any place I know). Finally, another Appalachian tune called "As Joseph Was A-Walkin'", also arranged by Thom Dutton. This last one doesn't actually mention a cherry tree in the lyrics, but its lyrics were incorporated into later Cherry Tree Carols, so it is considered part of the "Cherry Tree Series".