Have you ever bought a dress because it matched some thread you had? (Mark, don't answer that.) 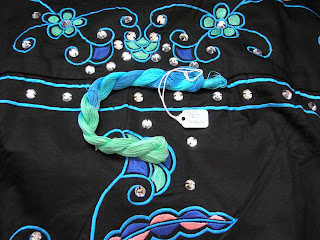 The thread is "Coral Reef" by Tatskool, which as always been a favorite of mine, and the dress is done in Indian embroidery. I wanted to make a pair of earrings to match, and I knew from a recent extensive exploration of earring patterns that the exact design I was looking for didn't exist. So I got to design them from scratch.
I wanted to create a design that would imply the female figure without being too literal about it. This is what I came up with: 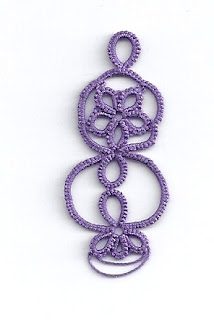 This prototype is done in Flora size 50. I've learned my lesson about using the HDT before the design is finalized. The design process was actually a lot smoother this time, probably because I had a clearer idea of what I wanted before I started. It took me four tries to get the stitch count right on the 5-ring cluster, which is where I started. But once I had that, the rest fell easily into place.
Then it was just a matter of adding the beads. I wanted, among other things, a bead in between the final ring of the cluster (which is a split ring) and the large ring which immediately follows it, but then the thread would need to pass through the bead again to be in position for the chain. Having no desire to unwind and rewind the shuttle, I deliberated on this for a bit. Then I remembered Yarnplayer talking about the loop tatted ring (LTR). So I went to her blog and found the reference, which in turn took me to Bina Madden's site.
After a couple of tries, I managed to tat a LTR. It's really just like a single shuttle split ring, except that the entire ring is tatted using the technique of the second half of the SSSR. You start by using a crochet hook to pull a loop of thread through the bead. Wrap the loop around your hand just like for a normal ring. After the "pinch", pull a bit more thread through the bead, enough to finger tat the ring with. Close the ring in exactly the same way as the SSSR. When you pull the shuttle thread, you will pull the loop back through the bead. The end result is a bead between two rings, with the two threads back together in position to continue tatting, without having a thread pass unattractively outside the bead. Clear as mud? I might do a tutorial on it sometime soon to make it easier to understand.
Once I had gotten all that figured out, the rest of the beading was easy, and here is the end result: 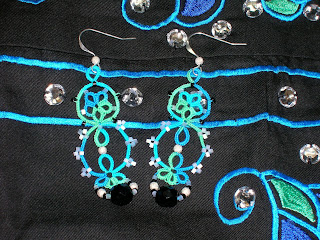 And a somewhat better picture: 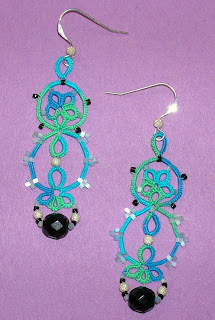 There were several "firsts" for me on this. In addition to the LTR, this is the first time I've designed something that isn't symmetrical in all directions, and also my first time designing with beads in mind. I'm pretty happy with it. If I had a "do-over", I would put black beads on the core thread in the bottom section, but I think it looks OK as is.

One more thing I learned: when you're working with seed beads that come in a tube, it's tempting to leave them in the tube and fish them out as you need them. Don't do this; put them in a little dish instead. I found that if you handle the tube too much, at least with the Miyuki brand, the ink from the label will rub off on your hands. Not good for your tatting thread!

The beads I used are Miyuki Delicas in size 11, silk finish light purple, and opaque black; 3 mm silver rounds in a "Stardust" texture; and 8 mm black Czech beads. You can't really see what the "Stardust" beads look like in the photos, though enlarging will help; they have a rough texture that gives them very glittery look. I got these from Artbeads; the earring hooks came with a Stardust bead pre-attached and are available from the same site. I have no connection to Artbeads; I just think these are really pretty.

Oh, remember a couple of weeks ago I said my earring findings had disappeared? Well, they were right where they were supposed to be. I swear I emptied out the whole box of beads and findings and didn't find them, but when I looked again, there they were. I must have gnomes or something.
Posted by Miranda at 12:44 PM