What Do You Make of This?

My parents found this shuttle a few years ago in an antique shop in England. 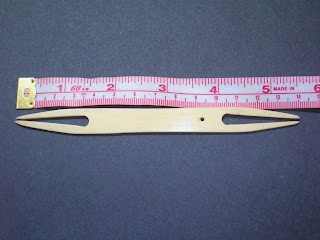 One has to wonder who they thought would be using it, for a shuttle 5 1/2 inches/ 14 cm long to be even remotely serviceable. And the really funny thing is, it is so narrow that it doesn't hold any more thread than a normal-sized shuttle.

I'm thinking that it may be a sort of "transitional" shuttle, made during the time period when knotting was declining and tatting was ascending. In this case, it would be understandable that a shuttle maker might not know what a knotter/ tatter really wanted from her shuttle, and he might have been trying to make something that would be useable for both crafts, if not ideal for either. I'd be interested to hear other people's ideas.

I believe it is ivory.

It came wound with this horrid yellow and green perle cotton. 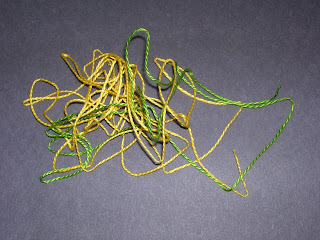 In addition to being, as Jane would say, grotty colors, these threads are stiff, rough, thick, and full of knots. I certainly hope that some poor soul wasn't trying to learn to tat with this shuttle and these threads-- that would be enough to put you off tatting forever!

I'm giving the thread to Squijum. At least he can get some pleasure out of it.
Posted by Miranda at 3:30 PM