Odds and Ends, and Beginnings

While awaiting the arrival of the blue threads for the placemats, I added a few more items to my "tatting grab bag". This is the little baggie that I'm going to start carrying with me when I tat in public so I can give little motifs to people who express interest. All three of these are from Mary Konior's Tatting with Visual Patterns. 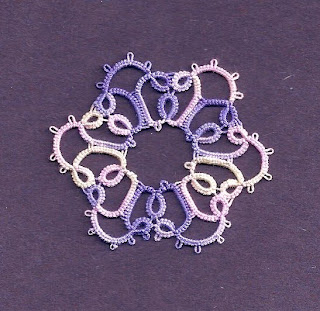 I did the "Carnival" motif in Tatskool's "Vanilla Sky" HDT. I can never get this thread to scan right; somehow the pink gets washed out. Tatskool has a much better image of what the thread looks like at the link above. I think the soft colors of this thread go really nicely with the curves of the motif.

I did make one mistake there at the bottom where I forgot to join those two rings. I didn't notice it until I was blocking it. I am learning to tolerate imperfection; still, if I were keeping this piece or giving it as a particular gift, I would re-do it. Hopefully as a grab bag item, it can find a home with someone who likes the colors and doesn't mind the glaring error in the tatting. 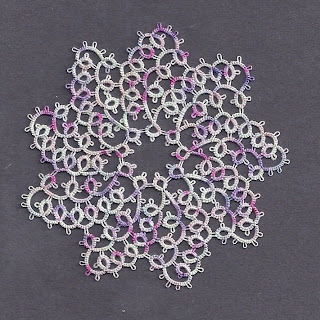 Here you go, Diane! Most tatters will recognize this as the "Spinning Wheel Glass Mat". The thread is "Wildflowers" by LadyShuttleMaker. This HDT is unlike any other I've seen with its very short changes and little splashes of color. I love it! In fact, I may decide to keep this one. 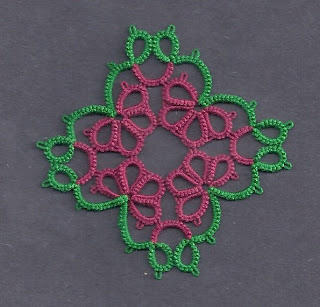 This is "Patchwork". It's not a new piece. I tatted it over a year ago and forgot about it until I ran across it the other day. It goes to show that just about anything can be turned into Christmas tatting with the right colors, in this case Lizbeth Victorian Red and Christmas Green.

Since the blues have now arrived, here is the beginning of the first placemat: 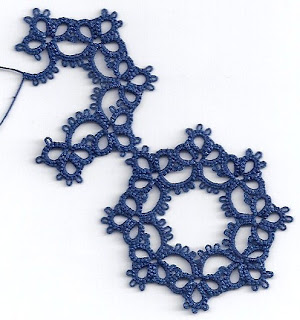 Well, it's a start. The pattern is Jon Yusoff's Clover Mat, and the thread is Lizbeth size 40 Wedgewood Dark. So far, the Lizbeth isn't splitting, so I think I got a good ball.

I probably won't post again till I get back from L.A. Hopefully I'll be able to make some progress on the mat while I'm out there.
Posted by Miranda at 2:17 AM