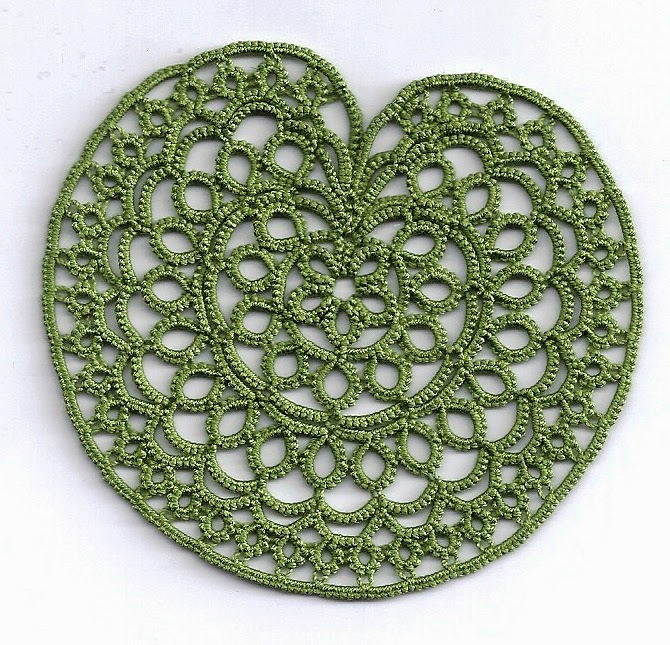 This was the second attempt, as the first one didn't quite work out. I got this far on it before I had to start over: 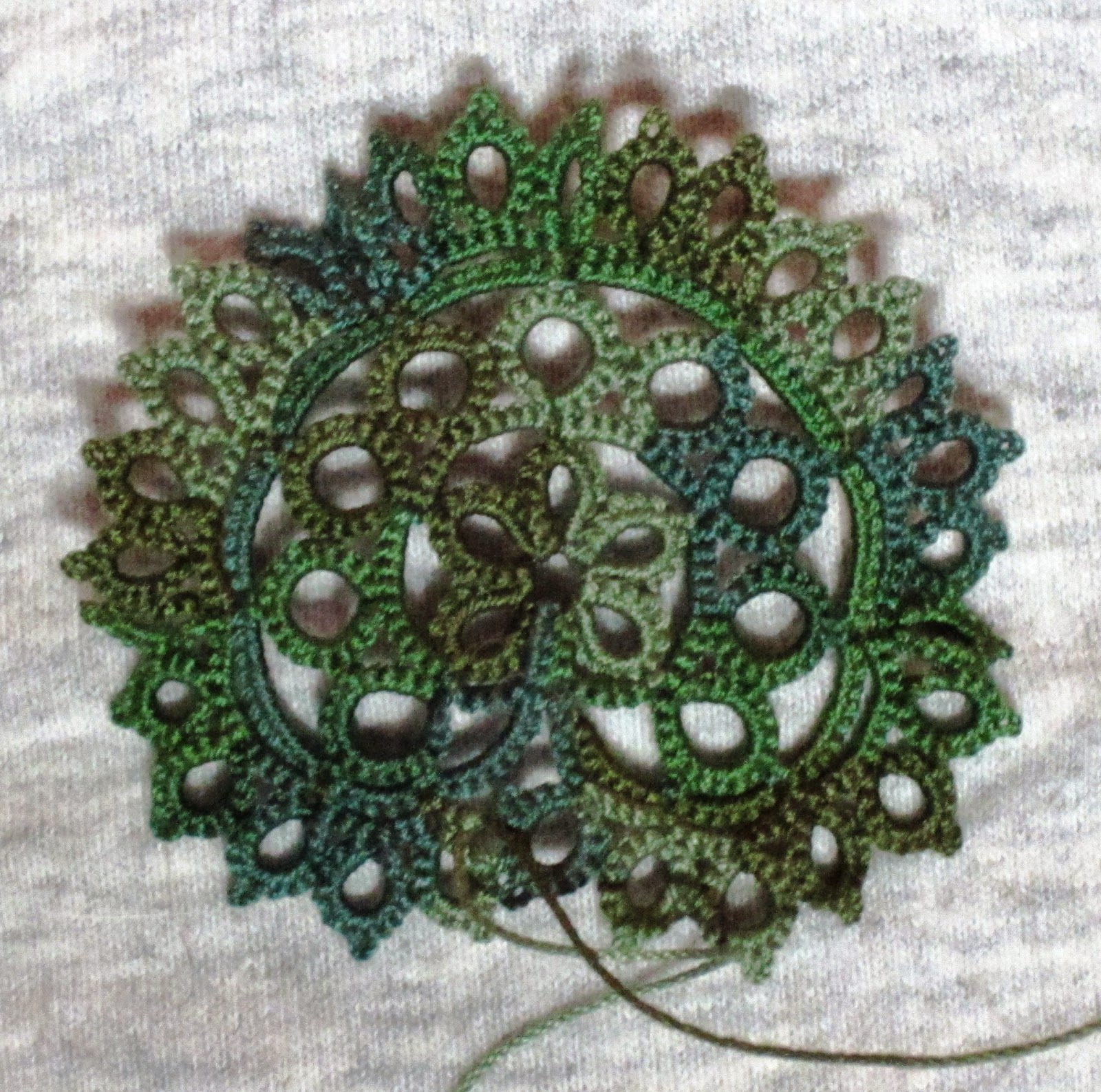 I stopped here for a number of reasons. First, the colorway (Lizbeth 167 Jungle Greens) had too many different colors in it for one leaf; I had thought a shaded colorway would be nice, but it would have needed to be much more subtle. Second, I put rings too far into the leaf's "dimple" and needed to eliminate a couple of them. Finally, and most importantly, the outer round was ruffling because there were just too many rings.

I liked the inner part, though, so I started over with that, using the solid Lizbeth color 684 Leaf Green Medium. Here it is at the same point as the one above. 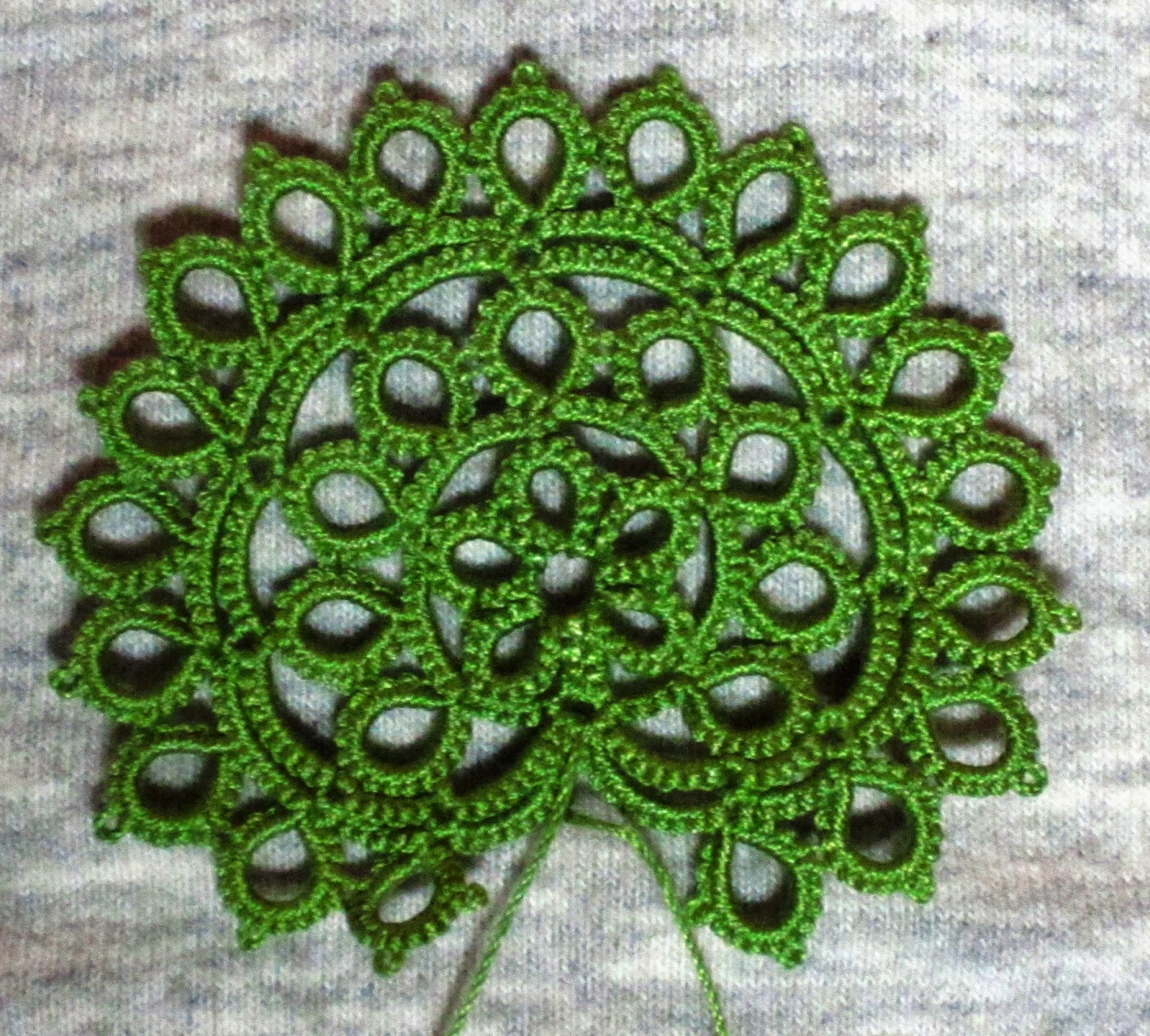 I started with the same center, which consisted of a five ring cluster with the last ring not joined to the first, and chains coming out from the center to surround the rings. This made the basic shape of a circle with an indentation in it and served as the template for all subsequent rounds. The surrounding chain also had thrown-off rings to increase the size and give me someplace to join the next round. Next came a round of plain chain, followed by another round of chain with thrown-off rings-- this was where I made the change. There needed to be fewer rings on this round, but they also needed to be larger to reach each other.

I originally thought I would end it here (with one more round of chain), but it still needed to be bigger. So I did the same thing again-- a round of plain chain followed by a round of chain with thrown-off rings-- but this time I made the rings smaller and changed their placement relative to the previous round. If you look at the completed lily pad, you'll notice that the last round has no rings over the lock joins as there are in the previous rounds; this was another way to prevent ruffling.

I finally felt it was large enough, so I ended with one more round of chain for an outline, using Catherine wheel joins (see Debbie Arnold's instructions) for a smoother line.

Of course, "large enough" is rather subjective. It takes up the right amount of space on the thing I plan to put it on (that was vague and mysterious, wasn't it?), but it is not in proportion with the dragonfly. 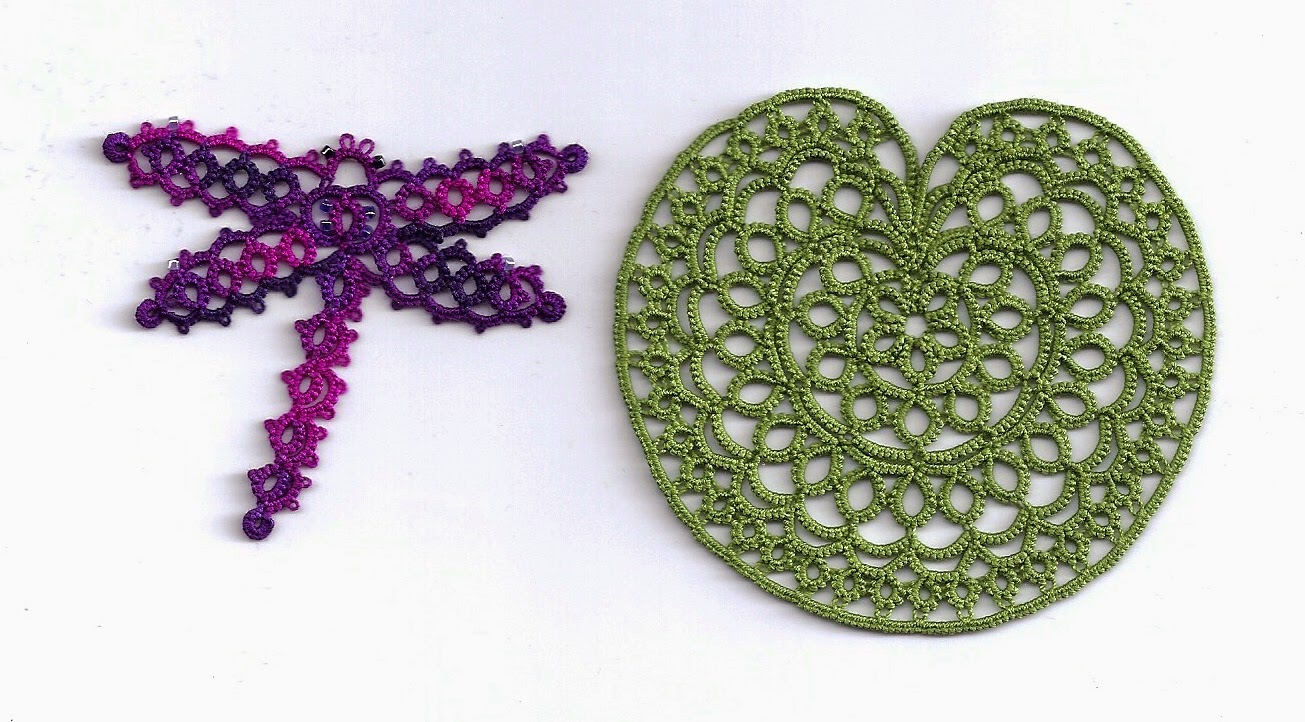 If this were a real lily pad, the dragonfly would be about 6-8 inches long. But the dragonfly is supposed to be the main focal point, so I'm taking a bit of artistic license.

There will be more flora, and probably another dragonfly or two, and then you'll see how it all fits together. And now I must stop and pay sufficient attention to my feline overlord before he breaks something.
Posted by Miranda at 5:22 PM