Only a Little Tatting

There obviously needs to be plant life around the edge of the dragonfly pond, so I've decided to tat short lengths of different edgings in various shades of green. The point is not to try to create any specific type of plant, but only to give the impression of clusters of plants.

The first one is Mary Konior's Leaf Braid from her book Tatting with Visual Patterns. 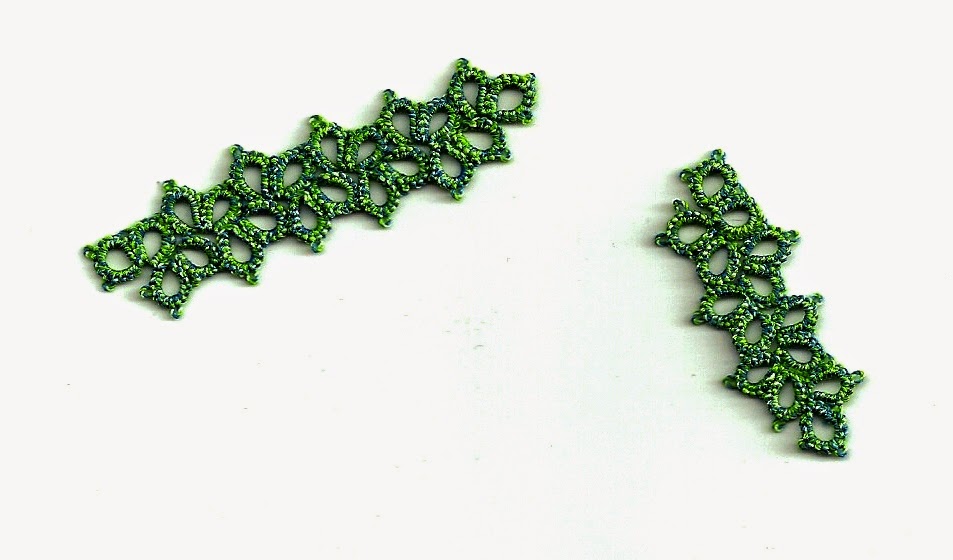 The thread is Lizbeth Twirlz color 404 Mermaid Lagoon. I kept these ones very short, because the Twirlz is kind of a pain to work with. If you look very closely, you'll see that some of the rings are not quite perfectly closed; this is because the thread is so twisty that it kinks up as you close the rings. Naturally, I re-opened the ring when this happened and closed it again very carefully, but sometimes I just couldn't get it perfect. I also had to keep my tension a little looser than normal to help reduce these kinks, and this required extra concentration. The Twirlz does give a unique look, though; it's great when you want "sprinkles" of color.

Remember a couple of weeks ago, I mentioned I was going to be teaching someone to tat? Well, the first lesson had to be postponed, and we had it this afternoon. I brought her two Clover shuttles and some samples of size 20 Lizbeth wound onto floss bobbins. I brought three colors so she would have a choice, but stuck with lighter shades because it's easier to see the stitches. It turned out she already had a couple of Clovers, so now she has four; she had also brought some thread with her, but it was kind of loose and fluffy and would have been tricky to learn with, so I was glad I brought the Lizbeth.

Today she learned to make double stitches. She got the flip relatively easily, and as she practices this week I think it will start to feel natural to her. We started off doing a chain with two colors so she could easily see which thread was which; once she had chosen which two colors to work with, I used the same colors so that she could easily compare her work with mine. I think by next week she'll be ready to start rings.
Posted by Miranda at 5:34 PM