In my last post, I muttered something about dragonflies. My dad has asked me to do something with a tatted dragonfly for a friend of his; the possibilities are wide open.

Here's what I've got so far. 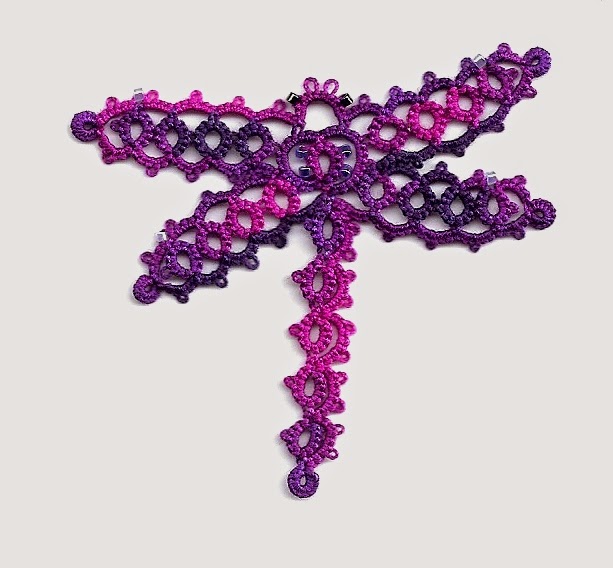 This gorgeous purple and fuchsia thread is "Purple Glory" by Yarnplayer. The pattern is Lisa's Dragonfly, designed by Lisa Reichert. I found the link to the pattern on Tatting Pattern Central. Do go check it out if you haven't already-- only you'll have to quit your job to ever be able to tat everything there.

The only dragonfly I have previously tatted is Jon's, which I've done many times. That's a quick and fun little tat, but not nearly big enough for what I have in mind here. Luckily, it turns out there are lots of other tatted dragonfly patterns out there. After looking at several, this one was my favorite. It was easy to make, too, just ball and shuttle with a few shoelace tricks for the JK's. In size 30 thread, it measures just over 2 inches long, roughly the size of many real dragonflies.

There will be more to this project. I don't want it to be just a plain dragonfly by itself, as in the current scan. This looks to me as if it had been sprayed with chloroform and stuck on a card. I want to create the look of a live dragonfly in its natural habitat. This means water and aquatic flora. Due to the design of the dragonfly, the perspective will have to be looking down on the pond from above. I have a couple of different ideas on how I might go about this; it will require some thought and a trip to Jo-Ann's to make a final decision, but there are other elements to the project I can get started on in the meantime.
Posted by Miranda at 10:33 PM