An Eye for a Foot

One reason I haven't posted much lately is that every time I went online, my flash player would crash, rendering much of the internet useless. Blogger was one of the few sites that actually did work; I could have posted, except I simply wasn't turning my computer on very much because it made me angry every time. Several Adobe updates later, the problem finally resolved itself last week. The computer still frustrates me just because it is old and slow, but at least I don't want to throw it out the window anymore, so hopefully I will be posting more regularly.

I have a new hobby, one that I know I have in common with at least one other tatting blogger: belly dancing! I've only been doing it for a month, so don't expect beautiful videos anytime soon. It is lots of fun, though, and great exercise.

In class last week, I was having a really hard time with my turns, and my teacher said some people's feet just stick to the floor more than others'. I realized that was exactly what was happening: my body would move, but my feet wouldn't, resulting in a severe loss of balance. Yeah, that's right, I'm trying to learn to dance and I can't even manage to turn around. So I bought a pair of little footies designed for barefoot dancers. I wore them to class last night, and lo and behold, I could turn! 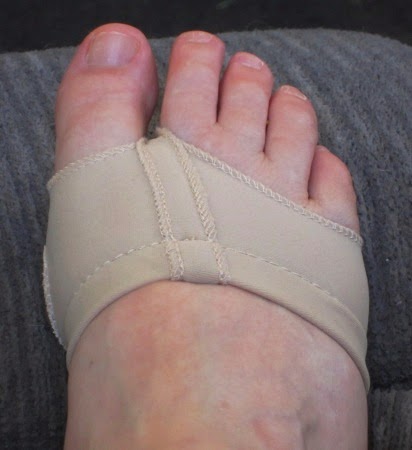 They're called FootUndeez. Yep, that's exactly what they look like, isn't it? That needed to change. 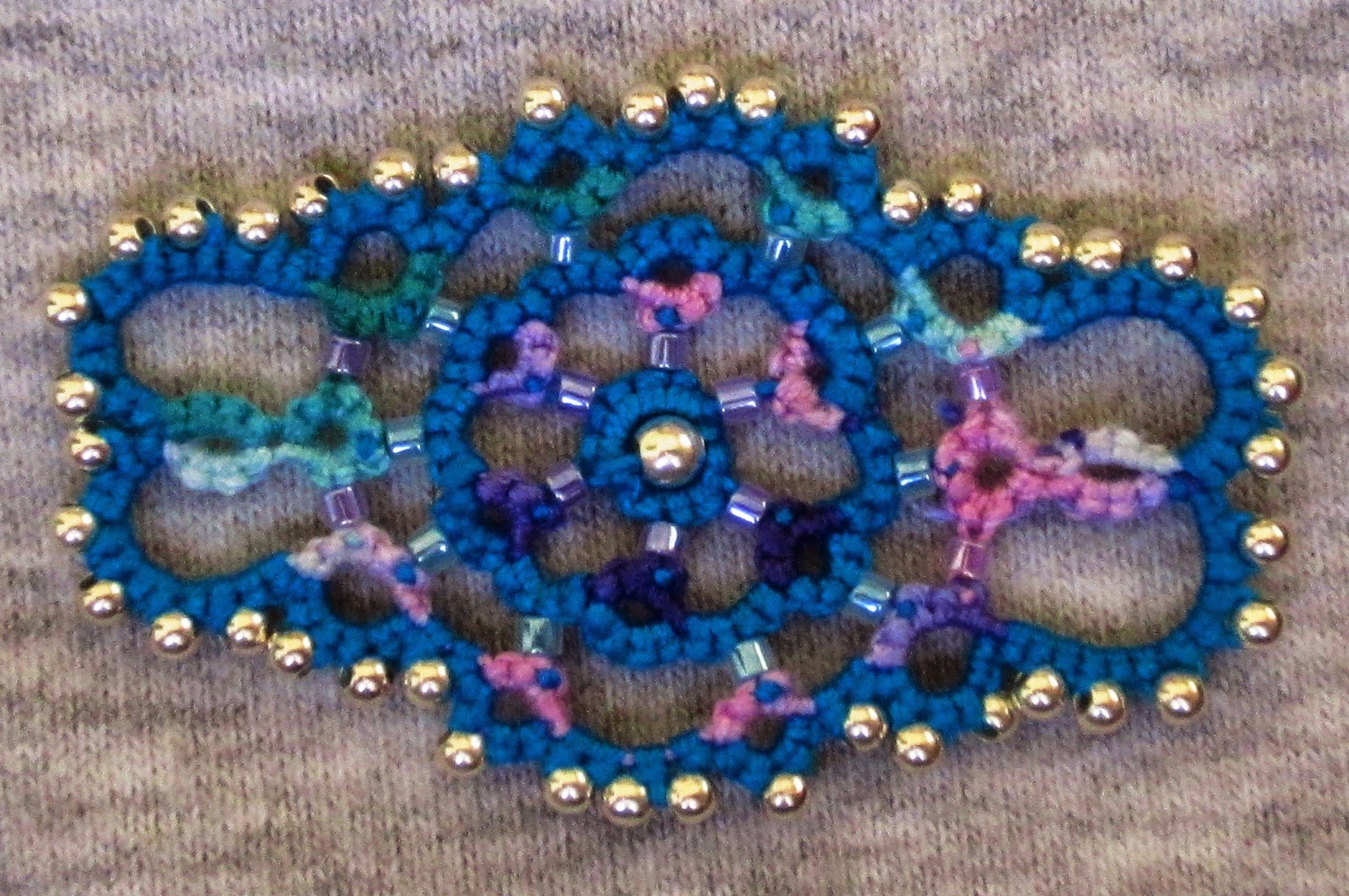 Believe it or not, this is an eye. Not the way I've tatted it, obviously, but it was designed as an eye. It is, in fact, Jane Eborall's eye pattern, tatted in decidedly un-eyelike colors, and with beads substituted for the long eyelash picots. I was looking for an ovalish shape, and with the eyelashes taken away, this design was perfect. The colors are Lizbeth 657 Ocean Turquoise Dark and "Winter Jewels" HDT from Tat-ilicious. (If you're reading this, Jess, I hope you're able to get your shop back up soon!)

I put the footie on to make sure it was stretched right, then I basted the motif to it, managing to accomplish this feat without stabbing myself or sewing the footie to my foot. 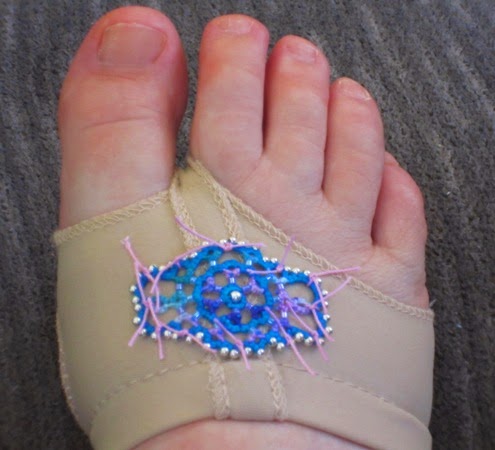 Then I removed it from my foot and used invisible thread to sew the motif on properly, and voila! 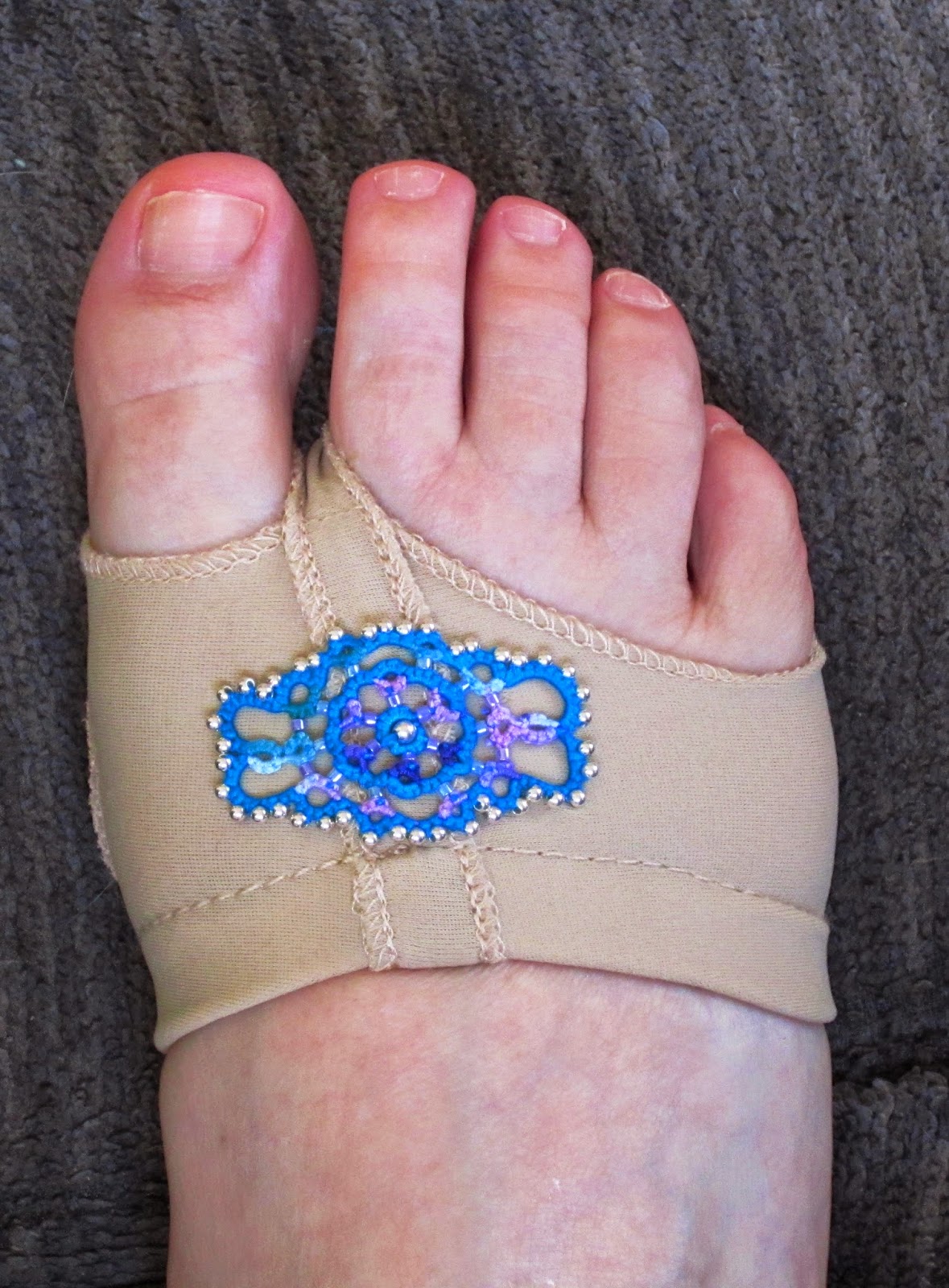 Just doing the one footie is enough to make me happy for now. I probably will do the other one at some point.

Right now, though, I have a special request for a dragonfly, and I am contemplating exactly what I'm going to do with it. Luckily, there are many dragonfly patterns available, but I don't want to make just a plain dragonfly by itself, looking like it's been chloroformed. I want to make it look lively, and I'm starting to get an idea of how. More on this in a future post. 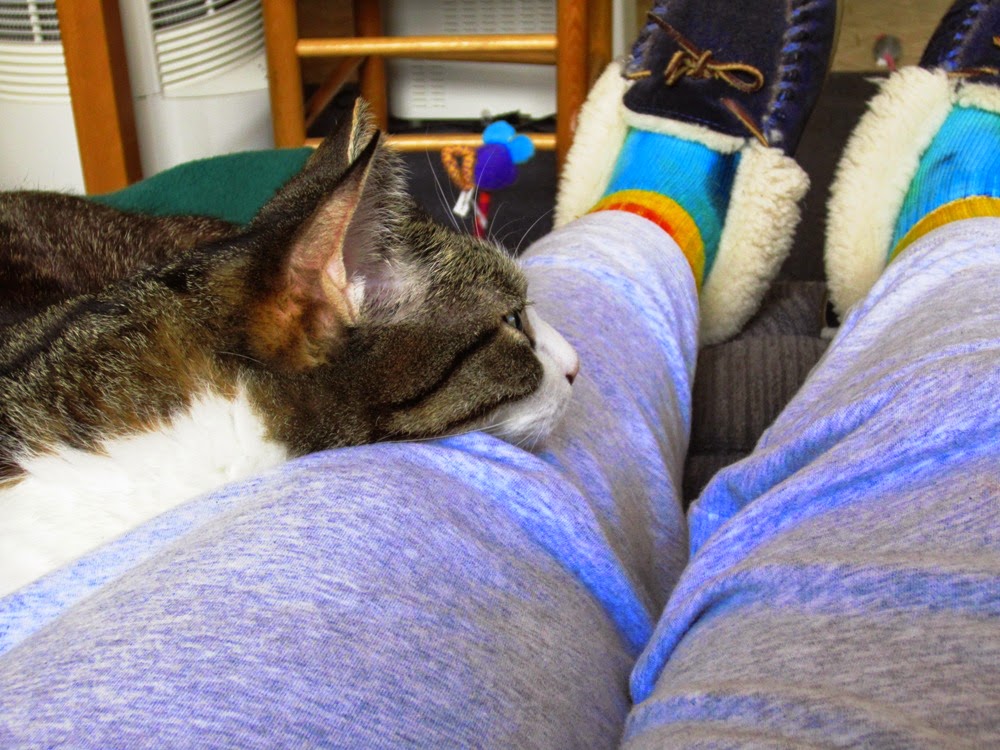 Personal from Feline Agent S to Feline Agent G: Hey buddy, here's a good tactic. Lull her with cuddles, as pictured above. Then when she opens a tube of seed beads, grab the cap and run off with it. Fearing you might choke on it (as if!), she will chase after you, still holding the open tube of beads. Before she realizes what she is doing, she will have spilled half the beads all over the carpet-- she won't be able to walk barefoot for weeks! The best plots are always the ones that cause the humans to do the damage themselves.
Posted by Miranda at 12:29 AM