Pin the Tail on the Horsey

If I may pause for a moment to brag, both of my students who competed in yesterday's harp competition won first prize in their respective categories. It should be noted that in this competition, the harpers are competing against the "standard" more than with each other; the judge does not have to award a prize at all if no one meets the standard. This time, though, a prize was given in every category that had any entrants, so the overall level of playing was quite good-- and my students were the best at their levels. And next year, a friend who's not interested in competing has said she'll act as Steward so I'll be able to compete too (at a different level, obviously; I wouldn't compete against my own students).

On to the tatting. I've finished the horse. Here are a couple of in-progress photos. 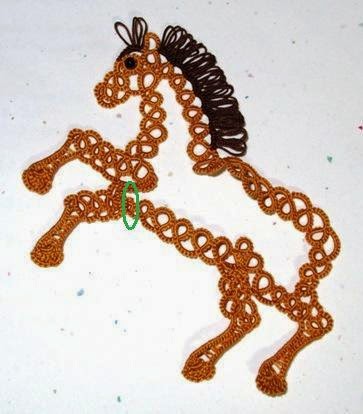 I initially left the tail off, since I wanted to tat it in a different color. This was perfectly easy to do; just tat up to the point where the tail begins, skip the tail, and continue the ring and chain outline, leaving a small gap between chains to join the tail to later.

The horse was distorted by the fact that I missed a join where the green oval is. That little ring should be joined to the chain above it instead of having a free picot at the top. This was very near the beginning, and I didn't notice it until the end, so there was no going back. I simply went back to our early tatting roots and used a thread scrap to tie the picot to where it should be joined. 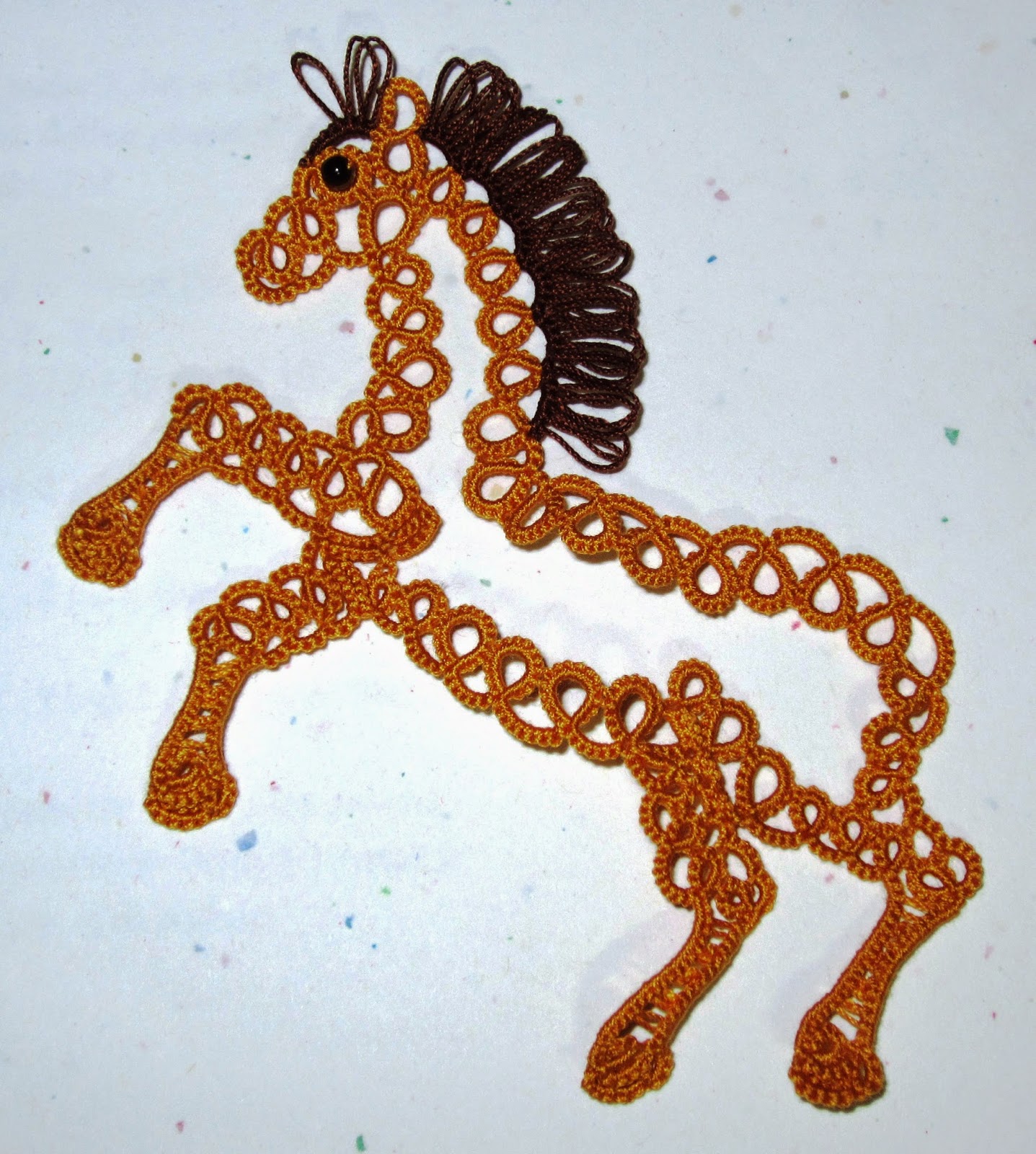 There, that fixed it. Amazing how such a tiny little thing can make such a huge difference.

Finally, here's the horse complete with tail, after being dampened and ironed. 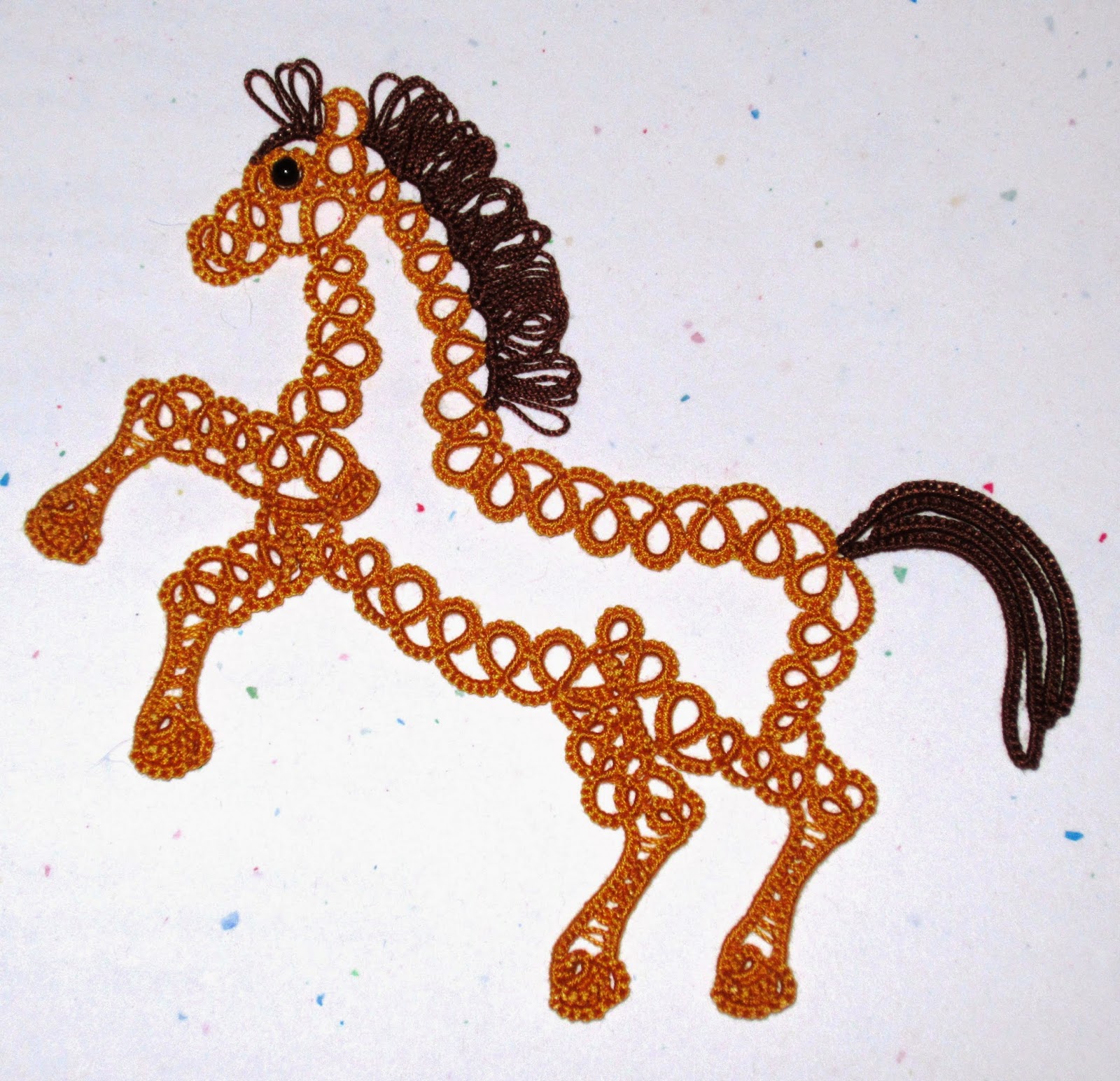 My tail chains are not quite as perfect as Martha's, but when I sew it down I will make sure they line up nicely. The tension flaws are probably due to the fact that I made the tail longer by a few stitches per chain.

As for the mane, which in the pattern would also be the same color as the rest of the horse, I simply cut off the second shuttle and replaced it with a ball thread in the darker brown. I made the ear by using the unflipped DS technique for those two short chains, then went back to regular flipped DS for the forelock. Then I obviously switched back to the main color for the second thread for the rest of the horse.

I made the mane picots 3/8 of an inch long, and I think that's a good length. I was planning to snip them open, but after ironing I decided I like the way they look as they are.

Now I just need to make a short length of fence and sew the whole thing down.
Posted by Miranda at 12:40 AM