It's true, and I must humbly apologize to my master, but I won't be going out of town again for a while. Last month, I had a fabulous vacation at Carlsbad Caverns, and I do highly recommend that everyone go there if you can.

This month's trip was more of a short-notice thing. I was in need of a new car, and my great-aunt Klara and great-uncle John are about to move into assisted living and will no longer need theirs, so Klara offered it to me and I gratefully accepted.

Klara and John live in a small town in northern Indiana. Here's the story of how I got there. Looking at various flight options, I found it was best to fly into South Bend, IN, with a connection in Chicago. If you look at a map, it seems silly to fly from Chicago to South Bend, it's so close, but the timing really worked out better that way. My flight was scheduled for Wed. July 24. As I tell this story, please bear in mind that I had worked the night before-- in fact, I had worked four nights in a row, and these are 12-hour shifts, which really leave you time for nothing but work and sleep, so I was already not at my best. Of course I didn't get to sleep that day, since I was getting ready to go out of town.

I arrived at the airport in plenty of time, and everything seemed to be going smoothly. The flight was scheduled to depart at 12:27, with boarding starting at 12:02. At about 12:12, the gate agent made an announcement that they had "just realized" the flight crew was delayed coming in from Denver, and the flight wouldn't be able to leave till at least 1:45. How, I ask you, did they fail to notice this more than fifteen minutes before the scheduled departure time?

Of course, they started calling people whose connecting flights would be affected by this delay, and I was one of them. They told me that my flight out of Chicago would be a really tight connection, but I might still be able to make it, so they were going to leave me on it; if I missed it, there was one later flight they could get me on that would have me in South Bend at 11:00pm (the original would have had me there at 7:00, and it's a little over an hour from South Bend to Klara and John's house, so I really didn't want to be that late). Needless to say, I was pretty anxious for the flight from Albuquerque to get going as soon as possible, and hopefully make up some time in the air. Just in case I missed the preferred flight, I asked if it would be possible to rent a car in Chicago at the airline's expense, since I could drive to South Bend much faster than the later flight would get me there. They said no, which I thought was pretty absurd since the delay was entirely their fault.

Well, the flight crew finally got there and the plane was ready to go, but by this time one of Albuquerque's traditional summer afternoon thunderstorms was brewing, so boarding was delayed for an additional hour. Once we finally got underway, the flight crew apologized profusely and explained that they were actually supposed to be in town the night before, but that flight had been cancelled; they were supposed to then stay in Denver, but there were a bunch of conventions and they couldn't get a room, so they had to go to Colorado Springs, and from there this was simply the earliest they were able to get to Albuquerque. So the airlines' ridiculous cancellations and delays affect their own employees, too.

I was able to get a brief nap on the plane, just enough to stave off hallucinations. And I turned out to be the luckiest person on that flight. It transpired that this plane was the same one that would be flying from Chicago to South Bend, so I wasn't going to miss my connection after all; I would just be arriving somewhat later than expected. Other people on the flight were missing international connections. If they would have started the process of getting people on other flights more than 15 minutes before the original departure time, they probably could have gotten some of these people where they needed to be on time.

Once we arrived in Chicago, the crew did probably the fasted plane turn-around of their careers. I was only off the plane for about 5 minutes before they started boarding for the South Bend flight. But they still had to go through the safety checklist-- and there was a screw missing in the cockpit. They said this was a very minor thing that normally could be deferred (I assume that's what they did with it in Albuquerque), but they couldn't find the deferment form, so they would have to find the screw. Apparently, it is a highly specialized screw that isn't lying around just anywhere. So we sat at the gate. Finally, after about 45 minutes, the pilot announced that they had indeed managed to find the proper screw somewhere on airport property, and it had been put on a truck to be brought to the plane. Fifteen minutes later, the screw arrived and was quickly installed, and we were finally able to take off for the 18-minute flight from Chicago to South Bend. Ultimately, I arrived in South Bend 2 1/2 hours later than expected, but it wasn't so bad compared to what some people went through. My mom, having driven up from Atlanta to help with the packing and move, picked me up at the airport and we drove to Klara and John's house.

I have to say, I felt pretty sorry for the flight crew, too. One of the flight attendants and the cockpit crew were the same for both flights. This must have been one of the worst days they've ever had at work, and none of it was their fault, but they had to do the best they could to deal with a lot of angry passengers.

I was able to spend Thursday visiting with Klara (John is currently in a rehab facility following surgery and we just didn't have time to get there that day) and getting all the paperwork completed for transferring the car to my name. Then I had to leave bright and early Friday morning for the two day drive back to Albuquerque, because I have to go back to work tonight. I'm just doing a load of laundry right now before I take a nap.

In addition to the car, Klara gave me this lovely framed doily, tatted by a friend of hers. The hand-carved frame was made by John. 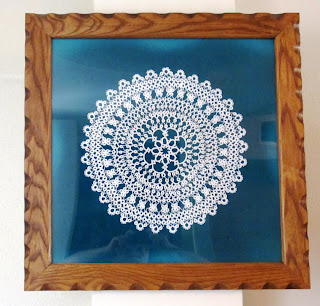 I am convinced that I have seen this pattern somewhere before. It looks like an Anne Orr design to me, but I can't find it in either of her books, so I must be wrong about that. I know you can't really see the details in this photo, but does anyone recognize it?
Posted by Miranda at 1:06 PM