As mentioned in my previous post, my parents have been fixing up my grandparents' former house, and my mom has asked for some tatted motifs to frame. Let me tell you, filling a request for someone who always has very definite ideas about what she wants (not that that trait runs in the family or anything) is not easy, but I think this will work.

She described the colors in the room as "cranberry, burgundy, navy, & country blue". She sent me photos of the small frames she has; they have small flowers all over them in multiple shades of blue. She also said that LadyShuttleMaker's "Helm's Deep" HDT (identified by sending me a photo of some items I had already tatted) would be the right colors. However, she also said that everything in the room is a little different, on purpose, so an exact match is not important.

Judging from the photos, the "Helm's Deep" thread is indeed exactly the same colors that are in the frame-- and that's why I decided not to use it. The print on the frame is a little on the busy side, and I think if I use a shaded thread in the same colors, the tatting will get lost in the frame. Actually, I think the best choice for these frames would have been white tatting mounted on a navy background, but she specifically said she's planning to use a white background, so I shouldn't use anything too light. I therefore decided to go with solid colors, the cranberry and the navy.

Then I had to choose the patterns. She specified two round and one square, each about 2 1/2 to 3 inches. Everything in the house is used, and a few items are actually genuine antiques, so I decided to use older patterns. I also wanted simple patterns that would tat up quickly.

And so I present the first of the three motifs. 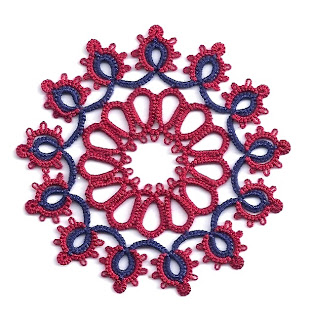 This is from the DMC book Tatting for Today by Marion T. Leyds. It was published in 1983, so the patterns aren't quite vintage (as far as I'm concerned, if it was within my lifetime, it cannot yet be considered vintage), but they are definitely intended to look old-fashioned. This is Motif # 2. The threads are Lizbeth size 20, colors 670 Victorian Red and 654 Navy. It measures about 2 3/4 inches in diameter.

I'm almost done with the second round motif and will post it probably tomorrow.

A couple of people asked about Squijum. Yes, he's still the ruler of the house. 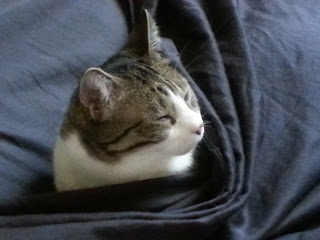