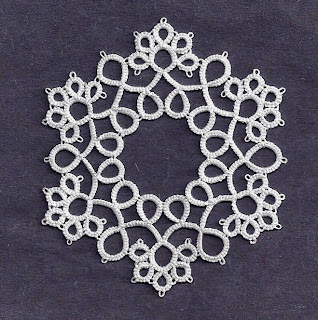 Here's the latest snowflake, "Angels in the Snow"; see sidebar at right for pattern information.

You can't tell in the scan, but I used a doubled thread for this one. The main thread was DMC tatting thread (size 80), and I wound it onto the shuttles with a Coats and Clark metallic thread. The metallic is also white, so all it does is add some sparkle. It's a very fine thread, so you have to have really good light to see it; unfortunately, it's cloudy today. But I know it's there.

As metallic threads go, this Coats and Clark is pretty nice to tat with. As I said, it's very fine, so you definitely want to double it with a cotton. But it's very smooth, not excessively stretchy, and doesn't kink up like some metallics do. If you just want to add a subtle sparkle to a piece this would be a good choice.

When I wind a doubled thread onto two shuttles CTM, I always find that there is some difference in the lengths of the threads between the shuttles, no matter how carefully I have measured them and tried to wind them together.

I deal with this by simply cutting the slack thread halfway between the shuttles. 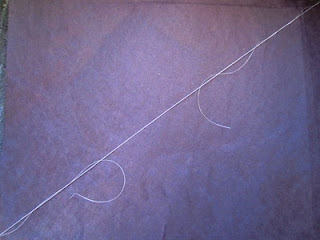 I then start tatting as normal and tat over the tails of this one thread. 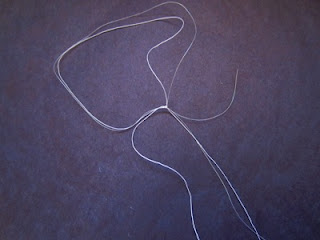 This way, at least one of the threads is CTM, so I only have one pair of tails to cover instead of two.

As I was working, I found that a small section of the cotton thread was slightly discolored, just enough to look dingy compared to the rest of the snowflake. I went ahead and finished, and when I was done I soaked the flake in a baking soda solution. That didn't work, so next I tried lemon juice, on the theory that if a base doesn't work, try an acid. Well, the lemon juice got rid of the discoloration, but I'm afraid it took a little of the sparkle off the metallic thread. Or maybe it's just the clouds today; I'll check again later when it's sunny. Now I know what works on a cotton thread if I ever have the discoloration problem again; but if there's also a metallic thread involved, I'll either cut that section out or start over, depending on where I am in the pattern. Live and learn, and the snowflake looks fine regardless.
Posted by Miranda at 11:48 AM