I finished the pendant from the second of the Sherry's tree medallions. I had already started it before I thought about how big the first one was, so this one is also quite large, roughly the same size as the first, in fact. 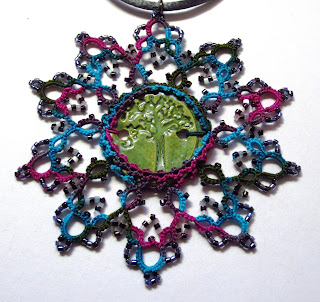 This one was always going to be for me, so I'll wear it as a pendant and decide how I feel about its size. Having put it on, I realize that although it is certainly larger than anything I normally wear, I have definitely seen other people wearing pendants this big. So maybe it's not so bad, it's just not my usual style. In any case, I now feel OK about selling the other one as a pendant.

The pattern is Jane's Sequin Motif Version 2, again made with ten repeats instead of six to fit the medallion. The thread is "Fancy Fields" from Tat-ilicious. 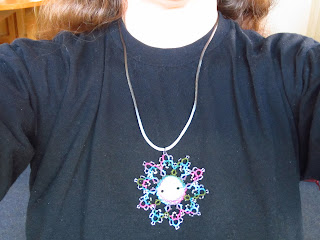 Forgive the terrible lighting, but you can at least see how it looks on a person. And not being able to make out the color or the tree on the medallion makes it look like a smiley face!

You know, if I were smart, I would have gone into the cat toy industry. 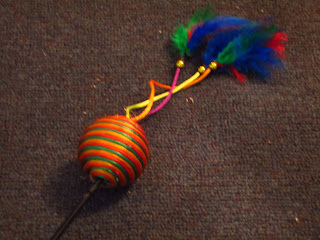 This had twice as many feathers on it when Squijum and I first started playing with it, about five minutes before this photo was taken. Two minutes later, it lost another feather. And the manufacturer knows perfectly well that I will buy another one the next time I'm at the pet store, because he loves it so much that even just a few minutes of enjoyment is worth paying for it multiple times. I do wish they would come up with ways to make these things more durable, though. I mean, their target audience has claws, for heaven's sake!
Posted by Miranda at 4:29 PM