A couple of weeks ago, Frivole suggested the idea of a necklace made from Heidi Sunday's Pumpkin Vine Edging. I added a few beads and findings, enlarged the central pumpkin for a focal point, and voila! 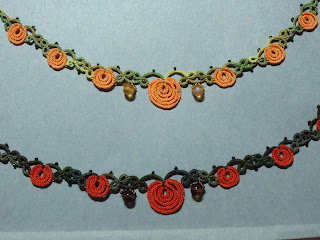 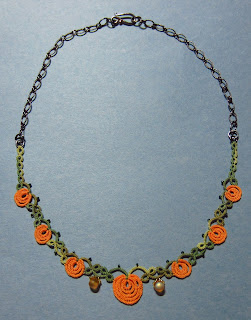 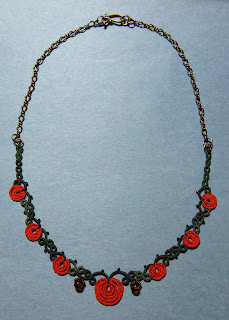 Like Frivole, I ordered several of Lizbeth's autumnal colorways, both variegated and solid. Like her, I rejected the Bright Orange as being too loud. Everyone's been using the variegated Autumn Spice colorway to tat pumpkins lately. It does look pretty, but really? Pumpkins are solid orange. I decided to go with a light version and a dark version. The light one uses colors 696 Autumn Orange Medium and 138 Leafy Green, with gunmetal-toned chain and findings. The dark one uses 694 Harvest Orange Medium with 167 Jungle Greens, and antique brass-toned chain and findings. Also like Frivole, I opted to make the rings in green as leaves on the vine; in the original pattern they are orange to represent smaller pumpkins, but that was just too much orange for me.

While trying the necklaces on, I realized that this edging would look terrific around the neckline of a crew-neck t-shirt for fall. Too bad orange is not my color!

You know what's really yummy? Pumpkin oatmeal. Tear some dried apple rings up into small chunks and throw them in the pot about 5 minutes before the end of the oatmeal's cooking time, so they can reconstitute. Then when the oatmeal is done cooking, stir in a couple of spoonfuls of pumpkin puree, some cinnamon, and some maple syrup. (For heaven's sake, use real maple syrup!) I could eat this all day long!

Squijum, on the other hand, is far pickier. At first, he thought that his mouth-healing diet of all canned food was the best idea I've ever had. Now he turns up his nose if the can I open isn't the flavor he was hoping for!
Posted by Miranda at 7:42 PM