TIAS Day 3, and a Small Flurry 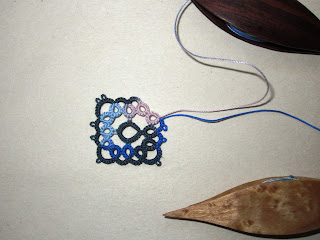 Like most people, I am intrigued by the extra picot on the first corner. The obvious inference is that something will be joined there that's not joined to the other corners, but what? And of course, knowing Jane, we can't necessarily assume something just because it seems obvious. I still think a locomotive is a possibility, with this section representing the smokestack. Or, as I said to Jane, it could be the window of a house with someone looking out of it. Or a slice of Spam!

Remember this ornament? This weekend I altered a couple of the snowflake designs on it to make them sturdy enough to hang on their own. The ones that were on the ball are still on it; I've just made others as stand-alone ornaments.

The first flake I looked at was the first one I made: 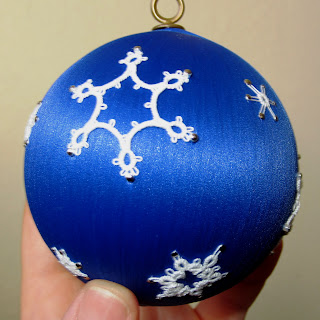 The problem with this one is that it's really just the outline of a snowflake, with nothing to support it in the center. As snowflakes go, it's actually pretty boring, as well as not being stable.

Inspired by Jane and Wendy, both of whom enjoy joining their tatting to various metal filigree findings, I placed this link in the center. It's not exactly filigree, but it's got loops you can join to, and more importantly, there are six of them. 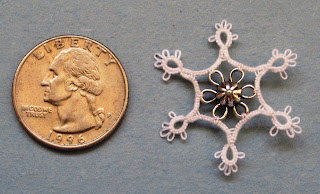 The tatting has the exact same stitch count as the original; I got lucky enough that the link fits perfectly. It really livens up the design, don't you think? As with the original, this is DMC size 80 thread.

Next, I took on this flake: 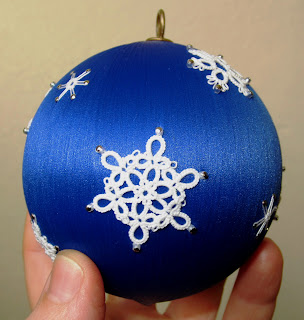 Here, the problem is that the outside is too big for the inside. First I tried it with another silver link. The loops of the link are considerably bigger than the inner tatted rings on the flake, so I omitted these rings and joined the chains to the metal loops instead. I also joined the clovers to each other for stability. 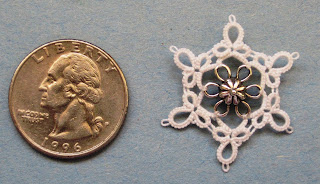 This worked out fine, but it doesn't really look like the original. The thing I really liked about the first one was the tighter curves on the chains. In order to achieve this, I had to go back to the small inner rings of the first one; in this case, I compensated by making the clovers a little bit smaller. 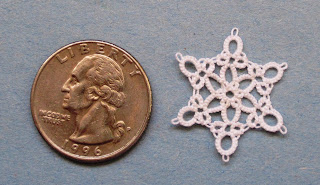 I like this one very much, and now that I have a workable design for it, I'll probably tat it again and write it down.
Posted by Miranda at 12:10 PM