How the Sale Went

My mom just e-mailed me to let me know how the sale went. Not everything sold, of course; I didn't expect that it would, considering how much I made. But she estimates that the tatting brought in about $200-250, which I think is pretty good. It also brought attention to some of the other jewelry and increased jewelry sales overall. The small earrings-- hummingbirds, dragonflies, treble clefs-- did really well, as did bookmarks. My ornaments also did well, but I'm not sure if that really counts, since my mom bought most of them!

Here's the story of how one of the pendants sold, in my mom's words:


My very favorite, the pale lavender with silver and purple beads, was purchased by a woman with a young daughter---probably around 4-ish---who is going to be receiving the necklace as a Christmas present. The mother did a lot of whispering over the kid's head while she distracted her with a cheap felt ornament, and I had to sneak the necklace out of the display, then in to the mother's purse!

Correction: This pendant, not the one made from Jane's pattern, is the one she was talking about. 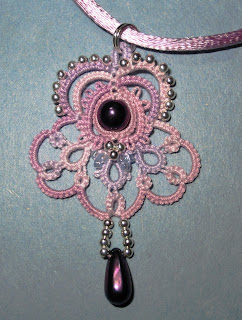 It is Marilee Rockley's "Belle" pattern, from the book Up and Tat 'Em. Although it looks a bit pinkish in the photo, it is really shades of lavender.

Several tatted items were purchased by people I have known all my life, including a couple of women whose fiber arts skills are really top-notch, so it's nice to think that they like my work.

As you've probably noticed, I've been taking a bit of a break from tatting the last couple of weeks. However, I am already making plans for next year's sale. I'll make some more of the small earrings since they did so well, some ornaments that I wanted to make for this year but didn't have time for, plus, since I have a whole year, some doilies.
Posted by Miranda at 12:22 PM