Connectivity problem solved. It was, as I suspected, a loose connection outdoors that kept getting jiggled in the wind. Usually it would pop back into place when the wind died down, but this time it didn't. It's supposedly good and tight now, so hopefully no more problems. And the tech even showed up within the expected time frame!

So, a tatted Rose. No, not the flower, my friend's daughter. In a few months, they will be moving to New York so that Rose can go to dance school, having already learned pretty much everything the schools here have to teach her. It was my friend's birthday this weekend, so I made Jane Eborall's ballerina. 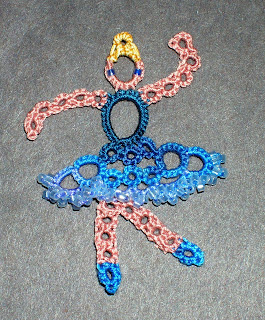 Jane makes it all in one thread for a more impressionistic look. I decided to go for more detail to make it look as much like the real girl as possible; this meant I had to make a few changes to the construction, with a few more cuts and ties. All the stitch counts end up the same as Jane's, but a couple of things are done in a different way.

Jane has you do the head, body and skirt all in one pass, with the head as an SCMR and the body as a split ring. I had to make the head separately; in order to make the face and hair different colors, I made it as a split ring, making the JK bun with the second shuttle. Then I cut and tied and started fresh with the body; the body is a normal ring, and the skirt is as written. I added beads to the skirt. I found that using three beads per picot is too many beads for the space-- which in this case turns out to be perfect, giving it a nice bit of ruffle. I made the first and last rings of the legs separately to be the slippers, and the arms are as written.

The face, arms, and legs are in Lizbeth color 626, Shell Pink Light. For the hair, I blended DMC size 80 color 579, a pale yellow, with Tatskool's "Ginger" HDT, also in size 80. When I wind two threads on the shuttle, I make my stitches a bit looser, so two size 80's together work up about the same as a size 20. The tutu and slippers are Yarnplayer's "Night Wind" HDT. The beads are Miyuki delicas in a medium blue for the eyes and a light blue for the skirt.

What do I expect anyone to do with a loose ballerina? Well, you know any tatting can be turned into jewelry! 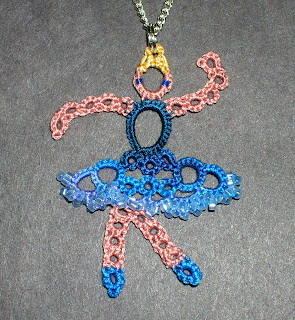