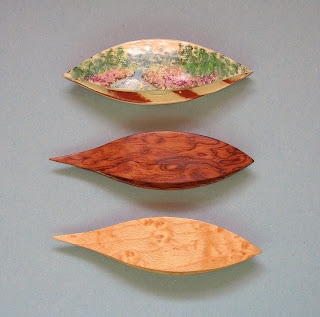 On top, of course, is one of LadyShuttleMaker's ceramic shuttles with a hand-painted scene. Here's a closer look at it. 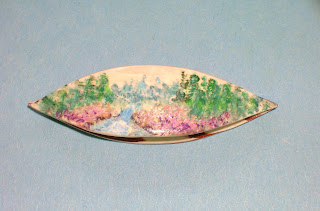 The truth is that ceramic shuttles as a working tool are not going to be to everyone's taste. But even if you never use it, I think that anyone interested in collecting shuttles should have one or two of Sherry's, purely for their artistic value.

The two wooden shuttles are by David Reed Smith, my all-time favorite shuttle maker. The darker one is pommele bubinga, and the lighter one is birdseye maple. I love the swirly patterns in these woods.

The first thing I made with my new shuttles is the medallion from Jon Yusoff's Sweetheart Set. I used Krystledawn's "Of Berries and Fairies" and "Fairy Faint" HDT's in size 40 and added a few beads. 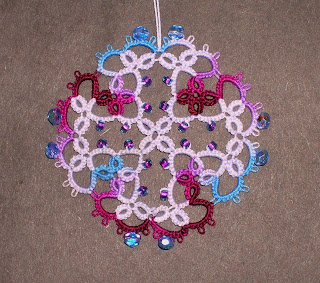 By tatting it in two colors, this medallion forms an equal-armed cross (it's even more striking when you use two highly contrasting solids, as in Jon's sample). The equal-armed cross is a highly symbolic motif in cultures throughout the world; you can read about it here if you're interested.

Jon really just made this medallion as part of the set of patterns based on a simple motif she had created. As far as I know, she wasn't setting out to design something so deeply symbolic. But isn't it cool that it worked out that way?

I was planning to give this one away, but I'm not sure I can part with it. I may have to make it again.
Posted by Miranda at 1:24 PM