Has It Really Only Been a Year?

That's right, I've been blogging for exactly one year now. I had been thinking about starting a tatting blog for a while before I up and did it. The impetus for actually getting started, was, of all things, boredom. This time a year ago, I was recovering from a major illness, and having to be on oxygen was severely limiting my mobility. I was getting a LOT of tatting done, though!

A lot has happened this year. I made a full recovery and returned to work and to normal life. My sweet, affectionate cat Poly died, and I now have the vivacious, charming Squijum. I've learned a few new tatting techniques and created several original designs. Most of all, I've made lots of friends in the blog world.

The truth of the matter is, I tat more than I used to because of my online friends. If I don't tat, then I have nothing to blog about. If I don't blog, then my friends start worrying about me. Therefore, I have to tat.

So to celebrate my blogaversary and thank you all for reading, here's the giveaway: 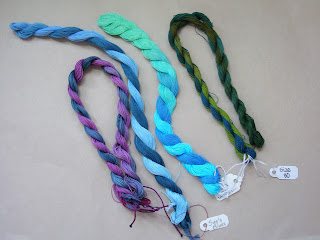 A selection of 4 HDT's, each made by a friend of mine, in blues, greens, and purples because these are my favorite colors. Left to right we have the resplendent "Royalty" by LadyShuttleMaker, soothing "Sue's Blues" by Yarnplayer, vibrant "Coral Reef" by Tatskool, and jewel-toned "Sea Glass" by Krystledawne.

This giveaway is also meant as a challenge for some of you. It seems that some tatters are afraid to work with the smaller threads. In my opinion, though, the prettiest tatting is almost always made with the finer threads. So to help build your confidence in your ability to use the more delicate sizes, the two on the left are size 50, which is really a medium size; and the two on the right are size 80, which is truly small. Maybe the winner will be somebody who already uses these sizes regularly; but maybe it will be somebody who never has and can learn to appreciate their beauty and delicacy (and that they are really no harder to work with!).

There will also be something else in the box, but I haven't quite decided what yet.

To enter, just leave a comment on this post, and make sure that I have a way to contact you. Either include a working e-mail address (you can use the form "yourname at emailprovider dot com" to foil the spammers), or have a blog where I can leave a comment. I will use a random number generator to choose the winner in one week, at noon Mountain Daylight Time on March 19.

So, I've got another heart to show you, although this one was made for another friend, not Kay. 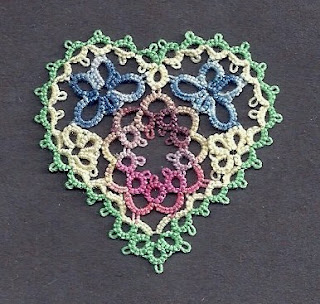 This is "My  Fluttering Heart" by Teri Dusenbury, from her book Tatting Hearts. The threads in the center are "Coral Rose" and "Helm's Deep", both by LadyShuttleMaker, and the outer threads are DMC solids (I don't have the numbers handy). And they are all size 80!

I did make a couple of minor changes to the pattern-- one of them hardly even counts as a change. Those clusters of three pale yellow rings, according to the pattern, would be made before the split ring to which they are attached, and then a third thread added to make the split ring, the SR being joined to the base of the middle ring of the cluster. Then the third thread is cut off and the split rings continue normally. "Ridiculous!" said I. Why on earth would you add an extra thread and have extra ends to hide when there's a much easier and tidier way? This pattern has quite enough ends without all that. I just made the 3-ring cluster with the second shuttle while the SR was in progress. I think it looks nicer, and it was certainly simpler.

The other thing I did differently is the one that I don't think is really a change to the pattern, just a different way of doing it, again in the spirit of "why do it the hard way if you don't have to". The pattern has you do the split rings using the outer (green) thread as the core; all the joins are therefore made with the second thread. I'm not afraid of making a join on the second half of a SR, but it is a bit fiddly to make it look right. So for all of the SR's except those two where I needed the yellow to be the second thread to make the rings, and the one immediately after the bottom clover where I needed to join with the green thread, I used the yellow as my core thread so that I could make normal joins on the first half of the SR. You should always feel free to question the way a pattern is written, and if you see an easier way to do it that will give the same result, go for it!

Oh, and here's how it looks in the picture in the book: 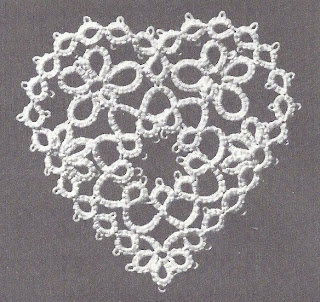 What a difference color makes! I think it's just as pretty in white, but a completely different look with colors.
Posted by Miranda at 11:44 AM