Now that I've put the table runner on indefinite hold, I can tat for me, me, meeeee!!!!! Hmm, that didn't sound very nice, did it? But I think it is actually one of the "rules" for International Tatting Day, which is coming up on Friday.

I made myself a necklace using one of Marilee Rockley's designs, "Belle". 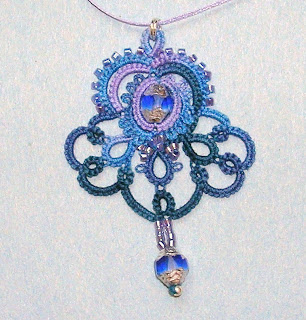 The pattern is in Marilee's latest book, Up and Tat 'Em (which, incidentally, I think is one of the best titles I've ever seen on a tatting book). I felt that this pattern really needed a thread that was variegated but not too dramatic, so I went with one of Marilee's threads, "Night Wind".

I did make one very slight modification to the pattern to accomodate the beads I had on hand. That group of beads at the bottom should be an ordinary beaded picot, i.e. beads pre-threaded before winding the shuttle and slide them into place when you need them, and the center bead on that picot would be a top-drilled teardrop. I didn't have any teardrops on hand in a suitable color, but I did have these pretty blue and silver Czech faceted beads that I just bought. I could have simply used it the same as the teardrop, but then it would have been horizontal, while the one in the middle of the pendant is vertical. I wanted them both oriented the same way, so here's how I did it. Instead of pre-threading the beads for the long picot, I turned it into a joining picot and placed the beads on it as I made it. I put on the 4 seed beads, the large bead, a small silver seed bead, then ran the picot back up through the large bead so that it would hang vertically with the silver seed bead securing it, then the matching set of 4 seed beads, and joined the picot to the first stitch of the following chain. It turned out to be a bit tricky doing it this way. I had to pull on the correct side of the picot a little bit at a time on each side of the silver seed bead and at the end of the picot (yes, of course I used a paperclip) so that there was no extra thread showing between beads. It took me nearly ten minutes to get that picot adjusted correctly. It came out right in the end, though.

This pattern worked up very quickly. Even with having to futz with the long picot, it still took less than an hour.

I've also decided that my favorite method for putting a bead in the center of a ring is Marilee's way of not making a true ring at all, but a SCMR. It's much easier than any other method I've tried, and lays very nicely.

Later this week I'm going to make some more jewelry from the same book.
Posted by Miranda at 9:36 AM