The Mother of Invention

Last Sunday, I got this mad idea that I needed to tat a cardinal. I searched online for a pattern and found nothing, so I asked on the Here-Be-Tatters list. Someone told me that there was one on the Palmetto Tat Days CD from this year. I ordered it and hoped it would get here fast, because this bird needed to go in a package that I was hoping to mail on Friday. Well, here it is Saturday, and no CD yet. It is the postal service's busy season, after all. It was still a good buy, because it sounds like there are several patterns on it that I'd be interested in. But I still needed that cardinal, and I couldn't wait any longer. Necessity being the mother of invention, I designed one myself. 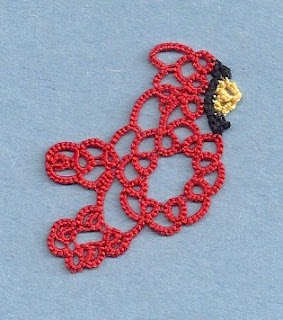 There are a couple of little things I would tweak if I were to make it again, but overall, I'm quite happy with how it came out. Especially after the first draft, which I will never ever show anybody.

And here's why I so desperately needed a cardinal: 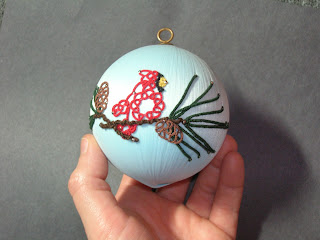 The pine needles and cones are from Karey Solomon's book Tatting Turns over a New Leaf. The branches are done in node stitch, but I wanted to give them an even more knobbly look, so I used a size 5 perle cotton (DMC color 938), and it came out just like I wanted. It turns out perle cotton isn't so bad to work with if you don't have to close any rings! The needles needed to be nice and crisp, so I went with Lizbeth size 40 (color 685, Evergreen Dark). The cones are done in Tatskool's new color "Cloves" in size 80, and the bird is DMC size 80 in the appropriate colors. The great thing about satin ornaments is you can just pin the tatting to them.

Why is it that all cats have pica? I thought I had found a safe place to leave my tatting while it is blocking, but the other day Squijum jumped up on that shelf and jumped back down with a pin in his mouth. At least I was awake. I'll have to try on top of the fridge next; I don't think he's found his way up there yet.

EDIT, 3 years later: I now have links to all of my tatting patterns, including the cardinal, available here.
Posted by Miranda at 3:37 AM