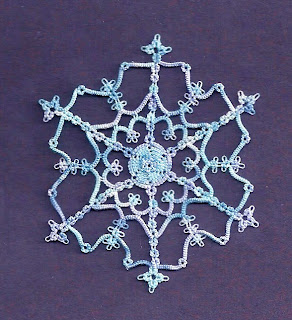 It is now in the possession of Martha Ess, who won it in my 100th post giveaway. This weekend, I retatted it, with a slight difference. 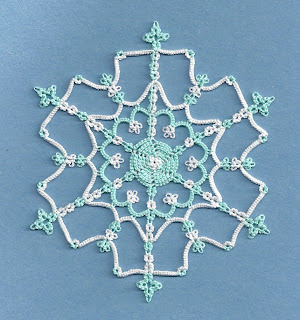 This time, I did it in two solid colors, in size 20 thread. The purpose of doing it this way was to illustrate the shuttle changes, so I intentionally allowed that one spoke of bicolored split rings. This scan will be enlarged and cropped to illustrate the written pattern. I can't make a diagram to save my life (although I'm sure it's just a matter of finding the right program to do it with), so my patterns use pictures of the actual tatting, large enough for the stitches to be visible.

I didn't think it was going to look good in two colors, but it turns out it does. At least, I think so. I'm going to do another one in a variegated thread, and then I think I'll do another in two solids. I will be able to avoid that mismatched spoke by using Dora Young knots, which function like split rings but show only one color, even when you're tatting with two. It will just be a matter of paying attention to which color shows where so that that spoke matches all the others.

I would like to thank Trayna for test-tatting my written pattern. I should have the final version ready to share in a couple of days.
Posted by Miranda at 10:36 AM