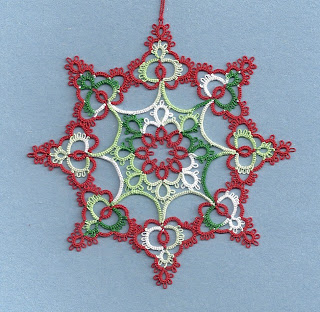 This is motif 36 from The Tatted Art of Teiko Fujito, made with Lizbeth Christmas Red and Christmas Green Mix.

By the way, even if this were white, it would not be a snowflake, no matter how much it might superficially resemble one. Snowflakes can only have six points. This is because the shape and polarity of the water molecule force it to crystalize in hexagonal forms. Being a stickler for accuracy, I get really irked when people refer to non-hexagonal motifs as snowflakes. It's just a motif.

I was working on this at a coffee shop yesterday. The young woman sitting across from me was obviously interested in what I was doing. We didn't chat because she was studying, but as I got up to leave she asked me what I had been doing. By then I had to get going, but I told her it was called tatting and spelled it for her so she could google it later. Then I offered her something from my grab bag. She chose an "Angels in the Snow" done in Krystle's Wine Berries thread. I'm hoping that having a piece of tatting in her possession will inspire her to look it up over her Christmas break. And, hey, cool, she liked my design!
Posted by Miranda at 7:39 AM