Norma, and More on the Doily

The overwhelming majority of commentors yesterday favored the blue background. I also decided that it was more in keeping with the mood I wanted to create, so that's what I went with. 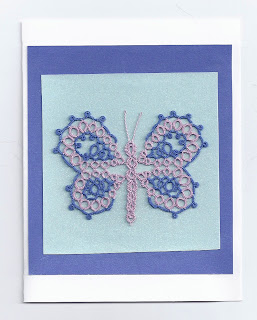 This card is for a friend. As far as I know, she doesn't read this blog, but I won't mention her name just in case she does. I had to keep this one simple, partly because my friend really needs a card now, so it needed to be finished quickly, and partly because I do have to keep going on the doily. The pattern is "Norma" from the book Tatted Butterflies by Adelheid Dangela. The threads are DMC size 80 in colors 798 (blue) and 397 (lavender).
And here is the progress on the doily: 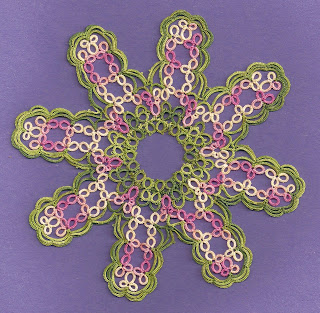 This is rounds 1-5. I was able to work rounds 4 and 5 continuously by changing the starting place. I'm noticing that each new round really helps to pull the previous round into shape, so this part will look a bit different after I make the next round. From here on out it also gets a bit more intricate as far as what joins where. I also have to be careful to leave a small space, not quite a picot, but just a tiny little space to join to between all the chains.
I should have the next round ready to post in a couple of days.
Posted by Miranda at 3:46 PM