I've finished the first three rounds of Janet Carroll's "Rising Star" doily. Since the threads I'm doing it in are called "Peace" (after the Peace rose) and "Leafy", I've decided to call my version "Peaceful Garden". 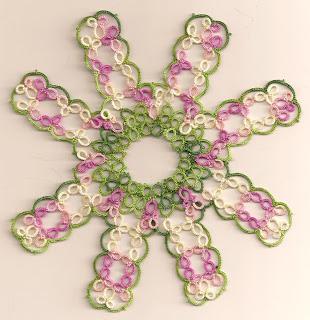 If you compare the four spokes around the bottom with the ones on top, you'll notice something interesting. The bottom ones are the first four repeats I worked, and the variegations in the "Peace" thread matched up perfectly. This was not something I could have predicted or planned; it just worked out that way with where I started on the thread, the length of the color repeats, and the stitch count of the pattern. Then I ran out of thread and had to refill the shuttle. I tried to start in the same place on the thread so that the pattern could continue, but it turned out I was just enough off to completely throw the whole thing off. After the fifth repeat I thought about undoing it and trying again to match it up, but at that point I had already cut the old thread short, so joining to it again would have been tricky. Plus, there's another round later on with clovers facing each other like this; since that round will be much bigger, I don't think the thread will do the same thing again. Since that round will most likely end up looking random, I decided it's OK for this one to also look random.
The next two rounds should go pretty quickly, as they are all chains.
Posted by Miranda at 4:47 PM