As promised, here are the first two rounds (out of 10) of the "Rising Star" doily, made in Yarnplayer's "Leafy" HDT: 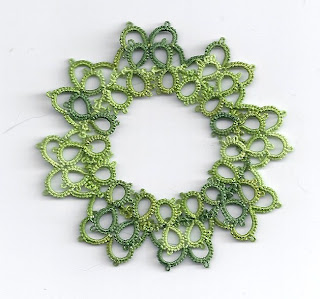 If you enlarge the picture, you'll see a few cat hairs as well; I'll have to trim those off. How I managed to glue everything down on the card without getting it all full of fur remains a mystery to me.
The first round took a bit longer than I expected. You have to twist the chains; you wouldn't think that would take a lot of extra time, but I had to slow down to check that I was on the right side before I started each ring. There's no more of that, thank heaven, but of course the rest of it will take longer just because it's bigger.
I was able to tat these two rounds continuously by starting with the second ring, ending with the first ring, and converting this to a split ring. Alas, I can't start the next round in the same place, and anyway I'll be changing colors on the shuttle now. [EDIT: Just to clarify, I didn't bother winding a second shuttle just for that one split ring. Instead, I used the floss bobbin that serves as my ball as if it were a shuttle. There won't be any more split rings, so this whole piece is really a one-shuttle pattern.]
This is the first time I've used "Leafy" for anything other than "representational" tatting. What I mean by that is that I've always used it to make pictures, specifically plants, up till now. I really like the way the subtle shading looks in a non-representational piece.
The next round will also include the "Peace" colorway.
Posted by Miranda at 12:10 AM