Three. 3. THREE!!! That's how many times I had to restart this bloody computer before it would allow me to do anything. I normally try to avoid restarting it at all, because it takes f...o...r...e...v...e...r to get going again, but today I had no choice. Good thing I had no other plans.

So what else have I been doing in all the time I didn't post, besides putting flowers on a hat? Well, I've tatted a fair amount of jewelry. It was all my belly dance teacher's fault. She hosts a performance salon once or twice a month at a local Indian restaurant (yes, that would be Middle Eastern dancing at an Indian restaurant; I don't question it, I just watch, dance, and eat) for her students, fellow teachers, and friends from other studios to get used to performing in a friendly space. She recently taught us beginners a choreography to perform there and suggested gypsy-style costumes.

Note: I am aware that the real culture of the Romany people has nothing to do with the romanticized image of a "gypsy". It was that romanticized image that we were going for with our costumes, and no disrespect was intended to actual Romanies. End of discussion.

It so happened that I had a purple broomstick skirt in my closet that was perfect for a gypsy look. So I scoured the belly dance websites till I found a gypsy-looking top that would go with it; what I found was purple and teal, my favorite combination, with some gold embroidery. Add a teal hip scarf and some jewelry, and I was ready to go.

I had had a hankering for a while to tat Marilee's "Duchess" necklace, from her first book, Boutique Tatting, but hadn't been able to think of where I could wear it. It occurred to me that it could look kind of gypsy-ish if I wanted it to. I also remembered seeing earrings to match the necklace, but I couldn't remember where, so I e-mailed Marilee to ask. It turned out it was the "Princess" pattern from her latest book, Beaded Tatting Finery. I didn't have that one yet, or her third book Tatted Jewelry, but they had both been on my "want to get" list for a while, so I went ahead and ordered them both. Getting two new books naturally inspired me to tat lots of other pieces, from the new books and from the two of Marilee's books that I already had. Some of those pieces are completed, others are still on the to-do list. 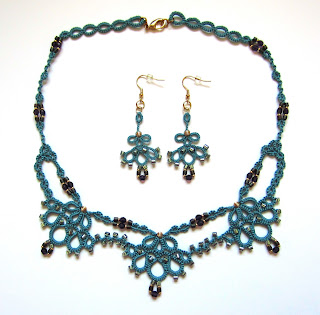 The thread is Lizbeth 661 Country Turquoise Medium. When I first started tatting the necklace, I thought it was turning out rather small. I rechecked the supply list (read twice, tat once) and realized that I needed size 10 thread, not size 20. I didn't have any size 10 and didn't want to wait, so I decided to start over and double the size 20. That worked very nicely; in fact, I think it helped give the necklace more "body" than simply tatting it in size 10 would have. The earrings actually call for size 20, so that was no problem.

For the costume, I added a second necklace of belly dancer-style gold coins-- just a single row, the simplest style they make-- and some gold bracelets and rings. For normal wear the tatted set works very well by itself.

And after all that, that's the only tatting picture I'm going to show you today. Teaser: I'll show more of what I've made this summer tomorrow. 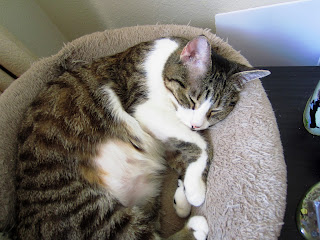