Most people who work nights develop a very special relationship with caffeine. This is particularly true of one of my co-workers who prefers her coffee with a flavored creamer. She brings in her bottle of creamer and stores it in the fridge at work-- and when she comes back the next night, she invariably finds that the people on day shift have used up half her bottle. This is despite the fact the she writes "Please do not use" all over it. This is particularly irksome because people on day shift don't need caffeine in the same way that night workers do, and they have access to the on-site coffee shop which is not open at night. The people who use it never bring in their own creamer, either. My friend is frequently quite enraged about the whole thing.

I decided there had to be a way to make a lockable bag to put the creamer in. It had to have a flat bottom so the bottle could stand up in the fridge. So I knitted two identical squares, stacked them on top of each other, rotated so that the grains of the two pieces ran at 90 degree angles to each other, then sandwiched a piece of felt in between them, and finally whip-stitched around the edges, going through all three layers. Sadly, I forgot to take pictures of this in progress, but it made a stable, non-stretchy, flat bottom for the bag. Then I picked up the whip-stitches along each side and knitted four sides for the bag. 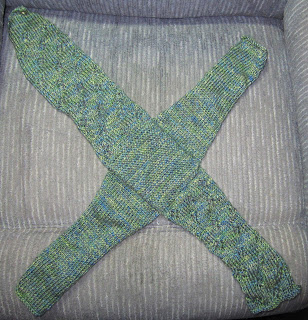 The bottom pieces are in garter stitch. The front and back sides are in this eyelet pattern, because I wanted to try something new. The other two sides are in plain stockinette to make it go faster. The back is longer than the other sides so that it folds over the top. Finally, I blocked it... 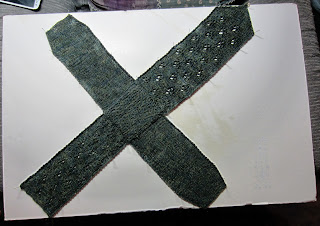 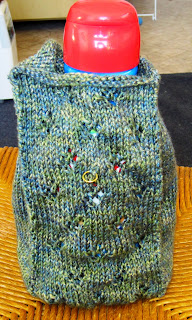 ...and added two brass rings to which a padlock can be attached. 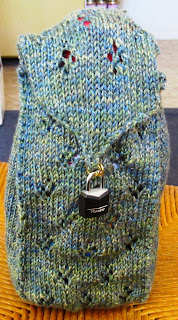 Now there's just one problem, which is that it doesn't actually work. A thief can simply do this: 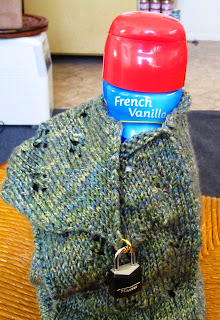 But I still think my friend will get a kick out of it, and it does reinforce the message that she really doesn't want people taking her creamer. There is a way I can easily cinch up the sides to make it really secure, but that would require three separate locks, which does seem a bit excessive for coffee creamer. I really doubt my friend wants to unlock three locks just to get a cup of coffee. But if the problem continues and she wants me to do it, I will; it would be easy enough.

What it really needs is a zipper all around the opening, with the zipper being locked like a suitcase. However, the idea of me successfully installing a zipper is laughable, so this is what I've got.

The yarn is a cotton-acrylic blend that can just be tossed in the wash if creamer gets spilled on it. And now I have a whole packet of little brass rings to attach tatting to!

UPDATE: Problem solved, thanks to the very first comment I received! "Chain," says Caseymini. "Why, I've got chain in my stash!" says I. Well, duh, when you want to secure something, you chain it up, right? So a few more brass rings and a short length of chain later... 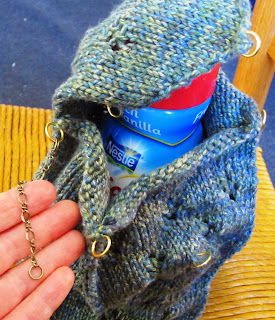 ...and I give you the Fort Knox of coffee creamer. 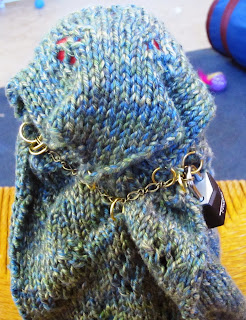 Thank you, Caseymini!
Posted by Miranda at 11:35 AM