Sad because it only has one wing. It will get better, but I have to say, it is taking longer than I expected. 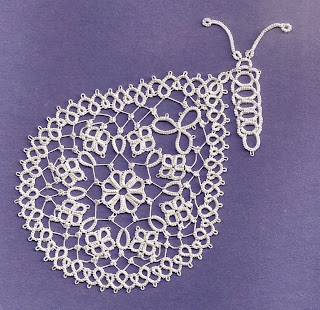 I am happy with the way this wing turned out, even if it did take a while. Part of the reason it took so long was because in the last mignonette round, I noticed that I had joined one ring in the wrong place and had to unpick a couple of other rings to get to it. By the time I had done this, I had handled the thread so much that parts of it were becoming discolored-- yes, my hands were clean! Even some of the previous round was discolored, so I ended up cutting out the whole mignonette section and redoing it. Between that and having numerous ends to hide, this is a project that is requiring great patience. Only three wings to go!

In DMC size 60, this is about 3 1/4 inches across so far. Since the top wings will be slightly wider, this means the finished butterfly will measure more than 6 1/2 inches across.

I really like the lacy look of it in all white. I've also seen a really stunning version that somebody did in colors. (Would the person who made that one please speak up? I'd love to have another look at it, and give a link.) When I first started this, I had visions of making a second one in color, but I'm not so sure now. I haven't ruled it out, but it won't be any time soon. By the time I finish this one, I will be ready to move on.

Oh yeah, the pattern is "Kirsten" from the book Tatted Butterflies by Adelheid Dangela.

UPDATE:  I found the colored version mentioned above. It was made about three and a half years ago by Steph. Go check it out!
Posted by Miranda at 10:00 AM