That's the name of this flake from the book Tatted Snowflakes by Vida Sunderman. 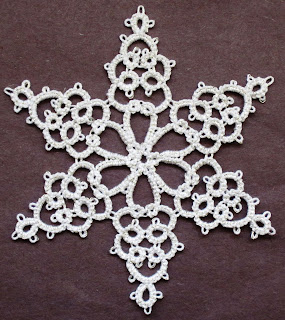 I like the shapes in this one. The middle looks like a daisy, and the points look like Christmas trees. It's all tatted in one pass, which is always good. I used Lizbeth size 40 in white, combined with Coats and Clark metallic thread in silver. I wish I could figure out how to get metallic threads to show up well in a photo.

This was the first tatting pattern book I ever bought, in 1996, in Bloomington, Indiana. I was 19 and had just learned to tat from a friend a few months previously. I chose this book because it was one of the few I could find at the bookstore-- the Internet was still in its infancy back then; there were few tatting websites, if any, and anyway I barely knew how to use a computer. So I had to buy whatever tatting books I could find, wherever I could find them, and work with whatever cheap crochet thread was available locally. The Jo-Ann's I worked at didn't even carry tatting shuttles, but we were able to special order one. And of course, I didn't even know that the thread I had wasn't any good. A year or two later, I got Internet access and discovered online craft retailers and DMC tatting thread, and vowed never to tat with cheap thread again.

I remember coming home from my very part-time job every day, to the badly-lit apartment I couldn't have afforded without my parents' help, and poring over this book and the other two tatting books I owned, trying to learn whatever I could. I must have read Elgiva Nicholls' book Tatting Technique and History a dozen times that year. And I did learn a lot from these few books-- how to work with beads, how to work with two shuttles, the continuous thread method, and how to properly work the ends in and block the tatting.

It's been a long time since I've pulled this book out, but I'm glad I did. It has a lot of really pretty snowflakes in it, and I plan to start using it more.
Posted by Miranda at 10:21 AM