Another Pendant, and More Knitting

Yes, this is still a tatting blog! 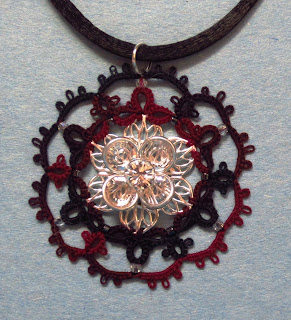 This is an adaptation of the "Melur" pattern from Jon Yusoff's book Tatting with Rings. Obviously, I didn't tat over a plastic ring for the center; instead I used split rings to move from one trefoil to the next in round 1. Aside from that, and the addition of a few beads, it is exactly as Jon wrote it.

I originally wanted to do something different with this doodad. As with the last Swarovski embellishment I used, this one has 8 little holes in the back that I intended to work with. That didn't work this time because the outer petals of this embellishment are filled with filigree, and there wasn't enough space to manipulate the thread to join to those back holes. I was therefore forced to choose a pattern with six repeats that I could join only to the outer petals of the doodad.

The thread is Yarnplayer's "Midnight Oil". I used some dark gray iridescent seed beads between split rings on round 1; the beads I used to join round 2 are also Swarovskis, so when I get this outside in the sun, it's really going to sparkle.

I'm still working on my knitting, too. 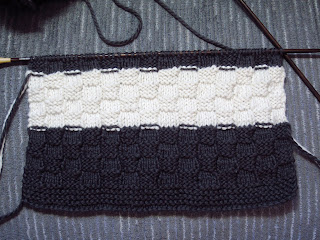 This is the start of a scarf. You can see from the fact that the lines aren't straight that I'm still figuring out my tension, but it's getting better.

I actually haven't worn a scarf since I got old enough to refuse, so this one is going to a friend who won't mind the imperfections.
Posted by Miranda at 3:00 PM