I just made three snowflakes for the sale; I just need to add hangers to them.

I've tried to stick with reasonable colors for snow on these. I figure most of the customers at the sale (other than the people running it) probably won't understand the concept of tatting for its own sake; they will want it to "be" something. And if it's going to be a snowflake, then it probably shouldn't be bright purple. 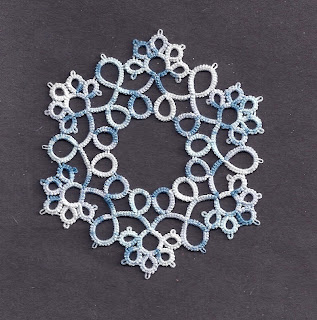 This is "Angels in the Snow", done in LadyShuttleMaker's "Icicle" HDT. This is a terrific colorway if you don't feel like tatting in plain white but still want to convey the idea of winter. It may not be totally realistic, but it gives the snowflake some depth while sticking with the colors that people associate with snow and winter.

Another way of adding a little depth to your snowflake is to pair the white with a very pale solid. 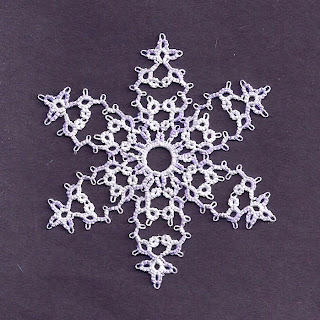 This is my "Crazy Daisy" pattern, done in white and Krystledawne's "Fairy Faint". I've mentioned before that this colorway does not scan or photograph well; it is so light that it's hard to get it not to look white. I think you can see it a little bit, but you'll have to take my word for it that this flake looks way better in person.

On a tangent, I hope that when Dr. Vonthreadmore returns from her travels, she will dye a few solids, because "Fairy Faint" is one of my all-time favorite colorways, and I'm almost out of it.

Finally, there's really nothing wrong with a plain white snowflake, is there? 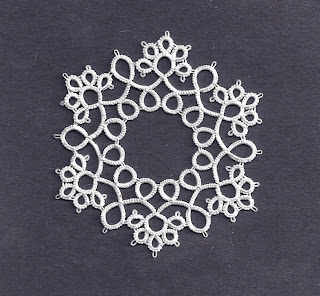