The first official day of fall is this week, so I got a hankering to make some leaves. 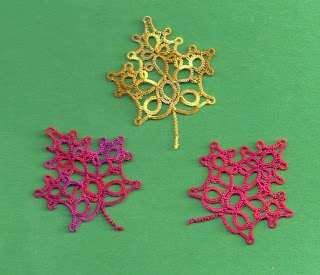 This pattern features roll stitch, so I've officially joined that trend. Roll stitch has a couple of advantages for this particular pattern. First, it is less bulky than regular tatting, so using it at the points of the leaves keeps them from getting all wonky. Second, a roll stitch chain can be made to curve in either direction, so there's no need for SLT's or switching shuttles to change direction.

Here's what I learned about roll stitch while making these. (1) Make sure you have a good length of thread around your hand, because you do not want to have to stop in the middle of the roll to pull out more thread. (2) Move the "pinch" a little farther back on your fingers (closer to your hand). This will allow you to hold more roll stitches in place at a time. (3) Continue to pinch the roll until the DS following it is complete. Otherwise, the DS may not end up facing the right way. (4) The core thread will twist as you make the roll, so be sure to let the shuttle dangle periodically.

Karey has you do a spiral (half-stitch) chain for the stem, but I thought I'd try it a couple of different ways. I used the spiral for the "Fuschia" leaf. For "Diablo", I used node stitch, aka Victorian sets, in sets of 4 1st hs, 4 2nd hs. For "Golden Glow", I used a lock stitch chain. I don't have any particular preference among the three. The spiral and the node stitch both make the chain somewhat thicker, which I think is good for the stem; however, they also give the stem a texture that it wouldn't have in nature. Lock stitch keeps it smooth, but also makes for a very skinny stem. Six of one, a half dozen of the other.

I also made a couple of oak leaves: 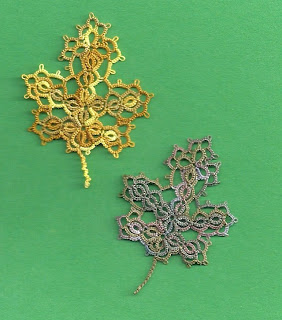 The pattern is from the same Karey Solomon book; the threads are "Golden Glow" and LadyShuttleMaker's "Treebeard". I couldn't quite tell from the picture if there was a join between the middle and bottom sections of the leaf, so I tried it a couple of different ways. I prefer the way I did it with "Treebeard".
These leaves are all going to go in my grab bag. At some point, I should probably go commit acts of public tatting so I can get people to take stuff out of the grab bag.

Karey's book also has patterns for an acorn and a maple seed "wing". Those would be nice touches to add if you were doing a picture with these leaves. Lots of other leaves in the book, too.

I also received the other skein of HDT that I had ordered, so here's the last of Jon's dragonflies: 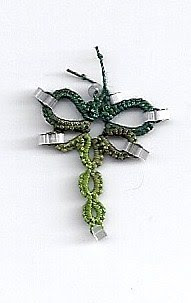 This thread is "Sea Glass" by Krystledawn. Thanks, Krystle!
Posted by Miranda at 2:03 PM