Working on the Rising Star doily has got me thinking about joins. As far as I know, there are three different methods for joining to a picot that is below the chain you are working on: lock joins, slope and roll joins, and Catherine wheel joins. You can find instructions for all of them at DS9 Designs; scroll down to the very bottom to find the links.
Pretty much all tatters know how to do lock joins, and many are familiar with Catherine wheel joins, but I think that fewer people are familiar with slope and roll joins. Today's post is a comparison of the three. First, the lock join: 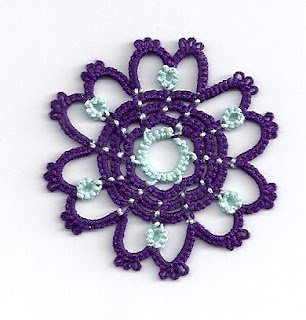 The lock join is the easiest of the three. It gets its name because it locks the core thread. By doing this, it creates a sharp break between two adjacent chains. If you are working with two colors, it also creates little spots of the core thread color, as you see above.
Sometimes these color spots look OK, like in this motif. I could have even done something more interesting with the spots by making the joining picots at different places in each round. Other times, you really don't want them, as in rounds 6 and 7 of the Rising Star doily: 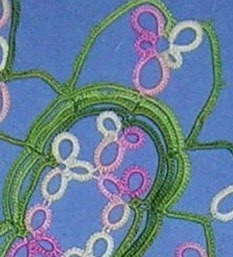 I wouldn't want little pink spots in the middle of these stacked chains-- especially since they would only be there in 2 rounds, the previous 2 rounds having been worked with a green core thread. For situations like this, you can choose between slope and roll or Catherine wheel joins. 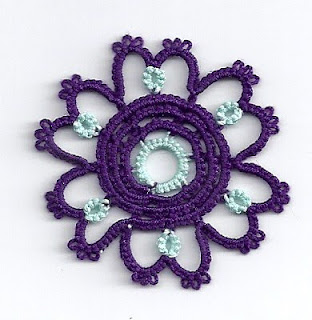 This motif was made with slope and roll joins. Like the lock join, the slope and roll makes a sharp division between two chains, but the core thread remains encapsulated, so there are no color spots. This is the join I went with in the doily. It is called slope and roll for a reason; the chains want to get a bit twisty at the join, but if you don't want color spots and do want divisions between the chains, this is the way to go. Also note that the core thread does not lock, so you have to be careful not to let the chains pull too tightly as you snug up your stitches. I find it easier to do this join with a crochet hook rather than the shuttle point.
Finally, we have the Catherine wheel join: 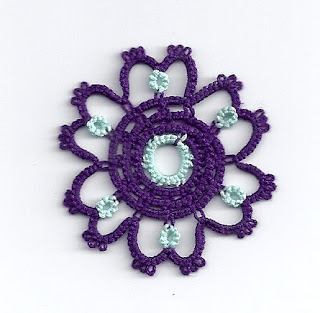 For this join, you need a second shuttle. As with the slope and roll, the core thread remains encapsulated so that there are no color spots, but one chain is a smooth continuation of the previous chain. Again, the core thread does not lock, and the join actually looks exactly like a double stitch. This is not a good join to use if you do want a sharp indentation between your chains; you can see in this motif that it looks nice in the spiral section, but the outer round looks a bit wonky. The Catherine wheel join is good for spirals (hence the name) and outlines, as in my rendition of Gina's Gingerbread Boy: 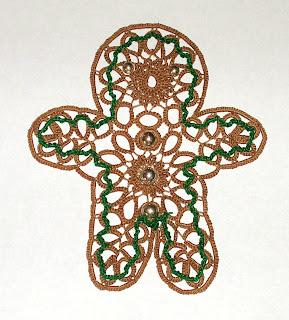 I used lock joins for the sharp indentations at the neck and armpits, but I used Catherine wheel joins for the rest for a smooth outline.
To sum up:

EDIT: I just fixed this table. I made a mistake in it originally.
I'm going to take a bit of a break to finish reading The Last Hunt, but I'll be back soon with the final three rounds of the Rising Star.
Posted by Miranda at 6:30 PM