This is just a quick note to say that the blog will be on hiatus for a bit, though I won't. My computer has decided to finally bite the dust. I'm posting this from my phone, but it's not quite as easy, especially if I wanted to include pictures. I'll resume posting once the computer situation gets resolved.
Posted by Miranda at 11:18 PM 6 comments:

Sorry I haven't posted for a while. I wanted to wait till I had done all the motifs, and then I figured I might as well do all the small ones around the outside, too. The small motifs didn't take long to tat, obviously-- they barely qualify as motifs-- but they sure made for a lot of ends to hide. 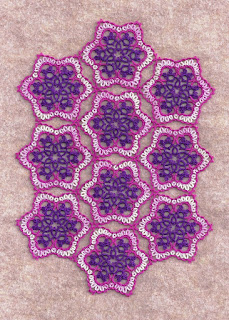 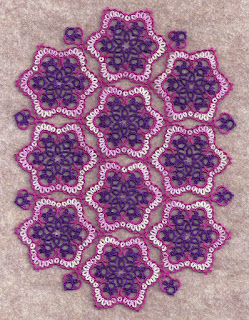 Now I just have to get through three rounds of edging. The first round looks like it should be pretty mindless work, so hopefully it will go quickly. This doesn't mean I'm not having fun. I've really enjoyed making this doily so far. It's just that edgings aren't my favorite thing to tat.
Posted by Miranda at 3:06 PM 8 comments:

I needed a little break from the doily, so I made some more jewelry from Marilee Rockley's book Beaded Tatting Finery. 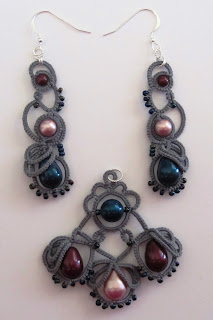 The earrings are called "Melange", and the pendant is "Cloudburst". The thread is Lizbeth color 607 Charcoal Medium. The round and pear-shaped beads are Swarovski pearls in colors Petrol, Blackberry, and Powder Rose; the seed beads are Miyukis in the Blue Iris color.

I've never tatted anything quite like these, and they were pretty fun. I think it would also be interesting to try them in a subtly shaded thread.

Tatters are such smart and creative people, always thinking of new uses for everyday objects! When I asked for help on caps for the tiny crochet hooks, I got some terrific suggestions. Sarah suggested the caps from medical needles. I work in a hospital, for heaven's sake, why didn't I think of that? I picked up a few at work last night (the caps themselves stay clean because we don't recap needles, but they would go in the trash anyway once the needles are used). 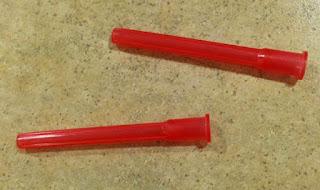 Martha suggested cutting up coffee stirrers. These have a different diameter from the needle caps, so I thought I'd give them a try too. I picked up a couple of them at work, too (they didn't give us raises for four years in a row, they can spare me two coffee stirrers). I didn't bother taking pictures of them because I figured everyone knows what a coffee stirrer looks like.

Muskaan suggested wrapping my homemade caps in tape to reinforce them, so I did that with both the needle caps and the stirrers, after cutting the stirrers in half. Again, I used stuff from work-- the nurses use these colored tapes to label their IV lines and keep track of what's going where. 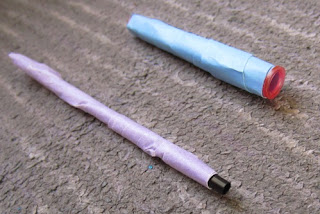 I brought them home and tried them out, and they work great! The needle cap fits perfectly on the crochet hook that has a plastic handle. The ones with metal handles are thinner, and the coffee stirrers work on those; cutting them in half made for a good length so that when they reach the part of the handle that's thick enough to prevent them sliding down any further, the tip of the hook will not be sticking out (I also sort of closed them by twisting the tape to a point at one end). 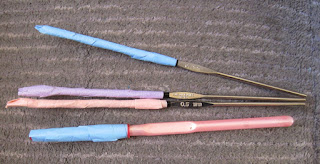 Success! They're not beautiful, but they work, and that's all I care about. Thank you, everyone, for your wonderful ideas!
Posted by Miranda at 9:29 AM 3 comments:

Anyway, in Miss Fisher's 1920's house there are a number of doilies that I have often suspected were tatted, but there was never a clear enough shot to be certain. For some reason, the camera tends to focus on the actors instead of the doilies. But a new season of the show just made it onto Netflix, and in the very first episode there is one very clear, focused close-up of the doily in the middle of Miss Fisher's drawing room-- and yes, it is most definitely tatted!

Now, on to the change of plan with my own doily. I was planning to make it round, with one central motif surrounded by six others. I wasn't really happy with round, since it's going on a rectangular box, but I thought if I made it oval it would be too long for the box. That's because I was thinking of making it oval by starting with the round and adding just two more motifs at opposite points of the circle. Then I realized there is another way of making it oval: a row of three motifs, then a row of four, then another row of three. This oval will be just a little shorter than it would have been the other way, and will fit on the box. And by oval, I mean elongated hexagon; it will truly be a miniaturized version of what's in the book. 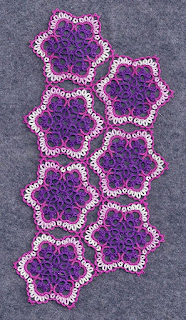 This means tatting more motifs than I originally planned; I now have three left to do. That's the advantage of a doily made of motifs over one made in the round: you can easily change the size and shape as you go. Think of Jeff's Windmill doily (is it still a doily, Jeff, or does it qualify as a tablecloth yet?).

The last three motifs shouldn't take too long, but then there's the edging. I always get bored with edgings.

Finally, a plea. Does anyone know where I can find more plastic crochet hook caps like this?

I can't find them online anywhere, but maybe I just don't have the right search terms. I e-mailed Lacis, but they said the caps aren't available. There's nothing on the Clover website. I tried knitting needle caps, but the small size was still way too big. I have three crochet hooks small enough that they really need caps so they don't stab their way through my tatting bag-- sizes 0.4mm, 0.5mm, and 0.7mm. This is the only cap that hasn't gotten lost, and you can see the sorry condition it's in. So if anybody knows a source for these, I will be eternally grateful!
Posted by Miranda at 12:43 PM 13 comments:

I haven't made any further progress on the doily. Well, I started the next motif, but then one of the threads broke in a place where I decided I'd rather start over than try to fix it. I do intend to work on it today and tomorrow, though.

In my last post, I said that I had tried Jane's method for joining without the color blip a few times in the past, but I never managed to eliminate the blip. I consider myself a pretty good tatter, and I can't stand being conquered by any technique, so I decided to give it another go. I have no idea what I was doing wrong before, but this time it worked perfectly on the first try. 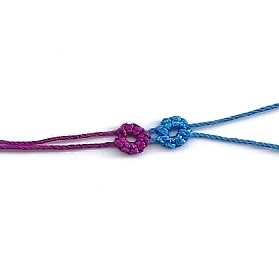 This makes me happy. The current doily started out with blips, so of course it will have to continue with them. But it's good to know that I can use this technique for future projects. Sometimes the color blips can enhance a design; sometimes, as in this doily, they don't much matter one way or the other; but sometimes they can be very distracting. It's always good to have options.
Posted by Miranda at 10:49 AM 7 comments:

I was making great progress on the doily, but then the work week started up again, as it will do. And then by today the housework had reached the point where leaving it undone would be more unpleasant than doing it, so that also ate into the tatting time. So I've only completed one more motif since the last time I posted. 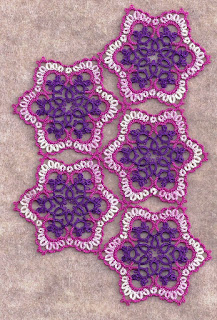 I do want to share something I've been doing with these motifs to make hiding the ends a little less noticeable (I hope). This would be a moot point if I were starting the outer round CTM, but since it's in different colors that doesn't work.

The first ring of the outer round is very small, and of course I tat the tail into it. 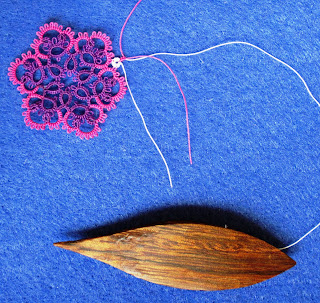 Tatting over tails necessarily adds a little bit of bulk to that section of the tatting, but it's usually not noticeable. However, because that ring is so tiny, I don't want to add even more bulk by working the final thread into it as well. Too many threads in too small a space is what it boils down to. If there were two or more rings side by side it wouldn't be a problem; I'd just work the final thread into a different one. But since they are just single rings, the only way to avoid having two ends worked into one ring is to end in a different place than I started.

I accomplished this by cutting the ball thread off, a bit long, after the final ring, threading it on a needle, and wrapping it through the base of the first ring.

Then I used split chain technique to work my way back to the last ring. In this particular pattern, it's a very short chain, so it's easy to do. 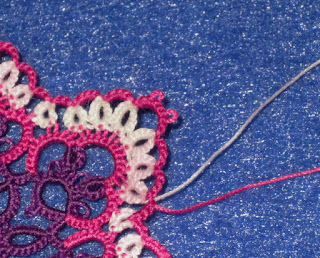 The tatting is now complete, and after tying the two threads together I can sew the shuttle thread into the last ring instead of the first for a smoother look. The ball thread can be worked into either chain (I choose the longer one because I don't feel three stitches is sufficient to secure the end).

It's true that if the last chain were much longer, I wouldn't bother with this method; I would just finish with a normal chain joining to the first ring and live with the extra bulk in the first ring. But the option does exist to do it this way when it's appropriate for the particular pattern you're working.

And yeah, there are color blips in my joins. With a larger thread, I can usually tension those out, but it's harder with a size 80. I've also tried Jane's "blipless" joining method a few times in the past, but I must be doing something wrong because it never works for me. For this particular project, I've decided to call the blips a design element.
Posted by Miranda at 10:48 PM 9 comments: